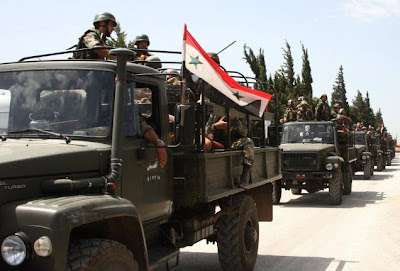 Gunmen fired from Syria into a refugee camp across the Turkish border a few days prior to a UN-brokered ceasefire between the forces loyal to Syria's Assad regime and rebel soldiers and defectors from the Syrian army.

Syrian activists claim that Syrian forces were responsible for a fusillade of gunfire that raked a refugee encampment near the south central Turkish city of Tilis earlier this month.

At least 15 other people were wounded outside the facility as they were fleeing Syria into Turkey, the activists said.

Clashes between Syrian forces and Free Syrian Army rebels are taking place regularly during the night along the Turkish-Syrian border, activists told The Times. However, this reportedly was the first known incident of direct fire at a refugee camp.

"There were clashes in the border area between FSA and the regular army," said an activist at the camp who requested to be identified only as Tariq. "It started around 3 a.m. We hear gunfire every night. But it is the first time they directly fire at the camp.”

"The regular army fired at the camp around noon," he said. "There are four wounded, including a Turkish nurse, and two Syrian refugees who were killed. They were both standing next to me on a higher ground, watching the clashes; I was filming when they were killed."

The incident could be construed as an attack on Turkey by Syria, which could trigger a mutual defense agreement Turkey retains with the rest of NATO.

On Wednesday, Turkish police and customs officials boarded a German cargo ship in the Mediterranean after a Der Spegiel magazine investigative report claimed the Atlantic Cruiser was carrying Iranian weapons destined for Syria.

Turkish Foreign Ministry and port officials said the ship was being towed into the port which is located on Turkey's eastern Mediterranean coast just over 100 km (60 miles) north of Syria, on suspicion it was carrying weapons.

The officials could not confirm if there were weapons aboard but said they were planning to inspect all the ship's cargo once it had been offloaded. The ship had been due to offload some of its cargo in Turkey as part of its route, they said.

A Reuters reporter in Iskenderun said he could see Turkish police from the customs and smuggling department on board the ship. Port officials said they had already inspected parts of the ship and would allow photographers aboard once the ship was docked.

German shipping company W. Bockstiegel, which owns the Atlantic Cruiser, ordered the vessel on Monday to turn its transponder back on after the ship switched off the tracking system because its crew feared attack.

The company has said it has no information about any weapons on board the ship which was originally destined for Syria.

White Whale Shipping, the Ukrainian company that chartered the Atlantic Cruiser has denied there were arms on board and said its cargo was civilian goods. Sending weapons to Syria would be in violation of a European Union arms embargo.

A website which tracks maritime shipping reported that the vessel was flying an Antigua Barbuda flag while Turkey's Dogan news agency had reported that the ship was displaying the Bahamas flag when it was intercepted.
Posted by Fenway_Nation at 11:35 PM