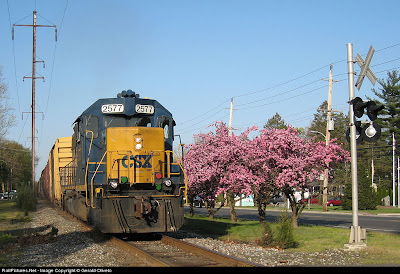 Today's train of thought takes us to the Garden State, whose monicker isn't being used in an ironic or facetous sense this time around.

Although split up by competitors Norfolk Southern and CSX Transportation in 1999, Conrail is technically still around in the form of Conrail Shared Assets operations. Unlike the mainlines belonging to Conrail and their predecessors, Conrail Shared Assets Operations performs switching and the running of local freights on behalf of CSX and Norfolk Southern to prevent either railroad from gaining a monopoly in some of the markets Conrail had prevously operated in. This includes ports and branchlines along the northeast corridor in the Philadelphia and Jersey City area as well as Detroit- although CSX or Norfolk Southern equipment is routinely used.

Here, railpictures.net contributor Gerald Oliveto caught CSX GP38-2 #2577 trundling past some crabapple trees in bloom with a Conrail Shared Assets local freight in the quiet north Jersey burgh of Helmetta, NJ on April 24, 2008. The train originated in Browns Yard in Sayreville, NJ (and still operated by Conrail Shared Assets) and is travelling along the former Pennsylvania Railroad Amboy Secondary, which was once electrified. Although the wires came down sometime in the 1990s, the catenary poles are still standing along the route.
Posted by Fenway_Nation at 9:34 PM