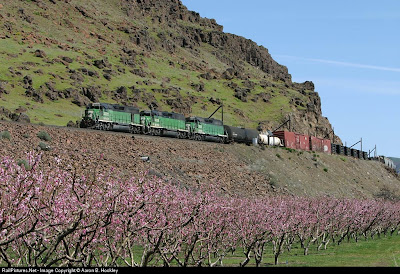 Today's Train of Thought takes us to Washington state, best known for coffeehouses, grunge music, the occasional exploding mountaintop and Apples- not the consumer electronic variety, either.

Accoring to USDA statistics, apples from the state of Washington account for more than 65% of  the country's total output. The state's Department of Agriculture estimates the value of Washington's apple crop to be in the neighborhood of $1.5 billion, with most of the groves located in the eastern part Washington as well as parts of the Columbia River Gorge.

Here, railpictures.net contributor Aaron B Hockley catches westbound BNSF manifest freight PASLYD-M [PAS = Pasco, WA to LYD = Lakewood Yard in Portland, OR M = Manifest] heading past an orchard in bloom in the sparsely populated burgh of Maryhill, WA on March 28, 2004. On this day, BNSF GP40 #3020 leads a trio of 4-axle BNSF EMDs still in Burlington Northern colors westbound through the Columbia River Gorge.
Posted by Fenway_Nation at 12:52 AM