The Great War, A Terrible Pillar of Fire, The Narrows, Cities in Ruins, A Blizzard and A White Spruce- The Story Behind Boston's Christmas Tree 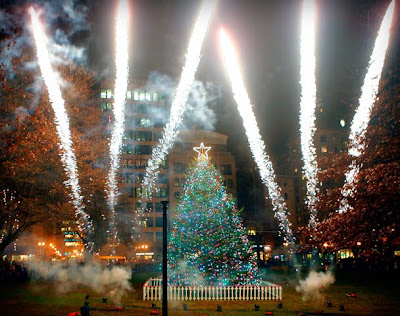 
The story of the Christmas tree that shows up annually on Boston Common begins nearly 92 years ago and several hundred miles northeast of the city with a collision between two vessels in Halifax Harbor on a wintry December 6, 1917. In a last-second attempt at evasive maneuvers, both the Norweigan freighter SS Imo and the loaded French munitions ship SS Mont Blanc- its cargo destined for the front lines of France in WWI- ended up colliding with each other at approximately 8:45AM that morning after the Imo had cleared the mouth of Halifax Harbor (known locally as the Narrows). The collision sparked a small fire on the Mont Blanc that quickly spread out of control. Within 10 minutes, the Mont Blanc's captain gave the order to abandon ship. The French-speaking crew landed safely on the Dartmouth side of the harbor in a pair of rowboats, but the crew's frantic warnings shouted in French weren't understood by the inhabitants of the English-speaking city. As other ships came to the aid of the burning Mont Blanc, a crowd of onlookers gathered along the shores of the harbor.

At 9:04 AM, a blast equivalent to 3 kilotons of TNT instantly destroyed the Mont Blanc in a fireball that rose well over a mile into the sky. A tsunami estimated to be 60ft high was also generated by the massive explosion, and those that weren't killed by the blast, debris or hot shards of metal raining down on the city were swept out to sea or crushed by vessels and heavy debris being swept onto the shore. The blast could be heard from as far away as Prince Edward Island.
The death toll from the Halifax explosion was estimated to be at 2,000. News spread to the rest of Canada and the world due to a message sent by Intercolonial Railway of Canada dispatcher Vince Coleman. Coleman initially fled when naval officers came ashore and warned railway personnel of the impending danger, but returned to the station's telegraph office- located only a few hundred feet from the Mont Blanc- to send out a message in Morse Code:
Stop trains. Munition ship on fire. Making for Pier 6. Goodbye.
The railways heeded Coleman's warning and all inbound trains for Halifax and Dartmouth were stopped. Coleman was killed in the blast, but credited with saving scores of lives for raising the alarm.
Unfortunately, Hailfax's suffering did not end with the Mont Blanc raining hot shrapnel and black soot on the area. Since it was Nova Scotia in the wintertime, that meant several homes and businesses had furnaces, stoves or lamps that tipped over or spilled from the force of the blast, starting small structure fires that would quickly grow out of control since most of the firefighters in Halifax were killed in the blast.

Mother Nature also had something in store for the Halifax/Dartmouth area as well. Hardly even a day after the Mont Blanc explosion, as thousands of injured, maimed and homeless survivors of the blast were awaiting shelter and medical care, a blizzard moved into the area and dumped sixteen inches of snow on the area. Although this prevented the smaller, ancillary fires from spreading through what was left of Halifax, this also hampered search efforts and some survivors died from exposure.

'Now where does Boston and Christmas trees fit into all of this?' you might be asking yourself if you've read this far. I know...hang on.

Upon receiving news of the calamity and massive loss of life in Halifax, the Boston chapter of the Red Cross began mustering doctors, nurses, volunteers, makeshift shelters and supplies in Boston. A special train with the supplies and personnel left Boston at 10PM on the day of the blast and made it's way through the blizzard and onto the Canadian Maritime provinces, arriving in the early morning hours of December 8th to provide relief to the aid workers and medical staff already on site, most of whom had been working non-stop since the day of the blast. Much needed food, medicine and water was immediately offloaded from the train.
One of the legacies of the blast was Boston surgeon William Ladd noting the lack of coordinated pediatric care in the region. Ladd would later be considered the pioneer of pediatric surgery in North America thanks to some of the insights gained while serving in Halifax.
Another legacy was that in December 1918, the city of Halifax sent Boston a Christmas Tree as a token of their appreciation for Beantown's quick response in providing aid to Halifax. Curiously, this did not become an annual tradition until 1971 as a promotion by the Lunenburg County Christmas Tree Producers Association. The province of Nova Scotia has set up a criteria for suitable trees to be shipped off to Boston that can be seen here. 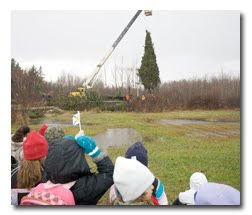 This year's official Christmas tree for Boston- a 46ft tall white spruce- was lit in Boston Common on December 3rd. The tree was a gift from the property of Folyd and Elaine Shatford of Fox Point, NS and was removed on November 17th. If you're interested in learning more about the 1917 Halifax explosion, you can read a more detailed account in Laura M. Mac Donald's Curse of the Narrows. 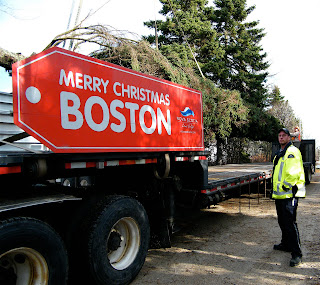 (Shippin' Up to Boston- ChesterNS.ca)