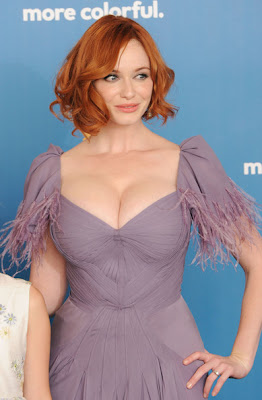 Turns out besides kickoff for College football, the Emmys were this weekend. Like paint drying or grass growing, I typically could let an event like the Emmys pass by without comment, but it seems realistically-proportioned eye-candy Christina Hendricks was once again the focus of some media buzz.

Or at least her stylist, Lawren Sample, was when she told of how difficult it was to find a designer dress that could fit Hendricks.

"She's a woman, she's got a woman's body. But most actors these days, there's nothing to them - they're a clothes hanger."

Lawren admits with unusual candour that though the 35-year- old actress's curves - her vital statistics are reported to be a 38DD-26-34 - are the envy of Mad Men fans, designers prefer to steer clear.

"If you have a fitting with anyone else - her Mad Men co-star January Jones, for example - she's going to get 50 beautiful runway samples sent to her," says Lawren.

"We need to have dresses made. If we don't have them made, we have to get a larger size that's been made for someone else but never worn, or a vintage piece."

Lawren has to beg, buttering up the designer, saying Christina is a "huge, huge fan" of their work. Yet nine times out of ten, it is still a flat "No".

I have to say, this Zac Posen fellow has made me stop and reassess whether or not the fashion industry is comprised exclusively of angry homosexuals who's sole purpose in life it is to try and make attractive women look as much like androgynous urchins as possible.

In the end, New York designer Zac Posen stepped up to the mark to dress Christina for the Emmys.

He wanted to accentuate her shape, rather than hide it. The lilac, cleavage-bearing, hourglass dress in chiffon with hand- stitched feathers was specially made for her, with a structured, boned bodice

"She's got a beautiful body, there's no reason to hide anything. Let's celebrate what she has," he said.

I'll let the final product speak for itself. 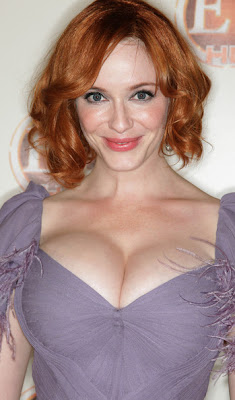 Personally, I think Hendricks almost falls into the 'Hollywood Pudgy' category and I think it's pretty telling that the fashion industry can't or won't make dresses for an actress who's measurements seem to be closer to that of most American women than most of the other actresses or singers out there.
Posted by Fenway_Nation at 10:50 PM