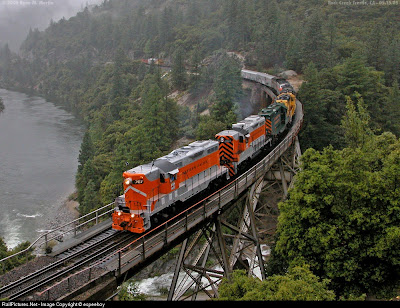 November 1, 2009 marks the 100th anniversary of the completion of Western Pacific's Feather River line between Sacramento, CA and Reno, NV.

According to the Western Pacific Historical Society, the milestone was reached with little fanfare that day.

On November 1, 1909, the track gangs from east and west met on the steel bridge across Spanish Creek near Keddie and foreman Leonardo di Tomasso drove the final spike. In contrast to the gold spike ceremonies on the first overland railway just forty years before, no decorated engines met head to head before a cheering crowd; no magnums of champagne were broached. The only spectators were a pair of local women and their little girls.

Twenty two years later, another massive undertaking- the joint 'Inside Gateway' project between Western Pacific and Great Northern was completed. The north-south rail line linking Keddie, CA and points south/west with Bend, OR and points north was considered by many to be the last great railway construction project in America.

At Bieber, on November 10, 1931, amid the icy blasts of a snow-bearing gale from the North and the equally frigid financial storms of the deepening depression, Arthur Curtiss James drove a spike of Oroville gold before several train-loads of dignitaries. After the ceremonies the guests tore down the grandstand and with it built a bonfire to keep from freezing.

Despite being financially strapped for most of it's existence, the WP was one of the first railways to completely dieselize in the early 1950s. The most famous WP train (operated jointly with the Denver, Rio Grande & Western and Chicago Burlington & Quincy) was the Chicago-Oakland California Zephyr and operated over the WP until 1970. In 1982, the Western Pacific was brought into the Union Pacific fold (in what would turn out the be the first of many Western and Midwestern Class I railroads to do so). Several of WP's earlier diesels have been preserved at the Feather River Rail Society in Portola, CA and can even be rented in the museum's 'Run a Locomotive' program- the first of its kind. The Oakland to Salt Lake City trackage via the Feather River Canyon is still in use to this day by Union Pacific and Great Northern successor Burlington Northern Santa Fe still utilizes the former WP-GN Inside Gateway.