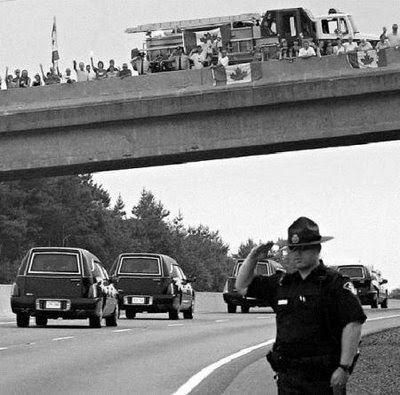 In honor of Canada Day today, I thought it would be appropriate to look into the Highway of Heroes phenomenon in the province of Ontario.

For the Canadian military, it is standard practice to have an autopsy performed on any serviceman or woman killed in the line of duty. The bodies of Canadian soldiers killed in Afghanistan are flown to the CFB Trenton Air Force Base and then driven about 100 miles to the west where the autopsy is performed at the Centre for Forensic Sciences in Toronto.

The procession has been taking place since 2002 and is always given a police escort the entire way. Much of this journey includes Ontario Highway 401, a freeway sometimes known as the Kingsway. 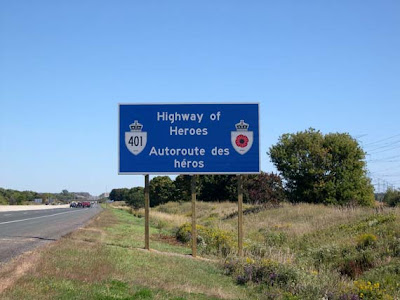 With the very first of the casualties being repatriated one final time, Pete Fischer- a photographer for Northumberland Today- noticed a crowd of about 30 onlookers, including a pair of policemen, gathered on an overpass and saluting as the hearses made their way down the 401. From there, the crowds from the townships and counties the procession passed through would steadily grow. Canadian flags, handmade signs and ribbons would adorn some overpasses while police officers or firefighters in uniform would park their vehicles alongside the 401 or an overpass and salute the procession.

In his bid to have the province officially recognize the Trenton-Toronto stretch of the 401 as the Highway of Heroes, Fischer recounted:

Every person who stands on a bridge will tell you it’s a feeling like no other. As you wait, you talk with people who have been there before, who you’ve come to know. People smile, share feelings, talk about how many times they’ve stood on various bridges. It’s a mix of pride and sadness.

When the convoy of vehicles is seen approaching, murmurs in the crowd can be heard: “Here they come.” There’s silence as people get ready. Then, there’s a sudden sea of arms waving Canadian flags, wanting to let family members in the procession know we are there for them, that we share their pain and are proud to be Canadian.

It’s not unusual to see a soldier’s hand waving a beret from a hearse, or a family member waving from a limousine, to acknowledge the people on the bridge. Those waves are simple gestures, but more than enough for everyone on a bridge to know in that split second that everyone has made a connection to the people in those vehicles.

Rain or shine, an impromptu, grassroots honor guard is present along ramps and overpasses of the 401 to pay their respects for the fallen one final time.

In August 2007, those advocating for official recognition got their wish as the province unveiled new signs along the 401 designating the 100-mile stretch the Highway of Heroes.

More recently, a stretch of the Trans-Canada highway through British Columbia was also re-named the Highway of Heroes at the urging of the Royal Canadian Legion, veterans and family members of the more than dozen BC natives killed in Afghanistan.

Keep in mind that aside from the Winter Olympics or Don Cherry, Canadians by and large tend to shy away from wearing their patriotism on their sleeves. I have nothing else to add other than I thought that was a very moving and sincere gesture by the folks living in some of these towns along the 401 to pay their last respects to Canada's fallen soldiers.
Posted by Fenway_Nation at 1:15 PM