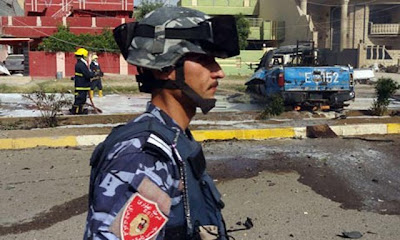 Senior members of Al Qaeda in custody were among hundreds of inmates who were set free from multiple jails- including Baghdad's infamous Abu Grahib prison- in a pair of brazen nighttime raids that was carried out earlier this week.

According to Iraqi officials, suicide bombers drove vehicles into the front gates and detonated before a second wave of gunmen swarmed into the prison, opening fire on the guards with mortars, RPGs and machine guns and setting inmates free. Meanwhile, accomplices positioned themselves on the road leading to the jail and ambushed reinforcements as they were on their way to aid the besieged guards. The Abu Grahib and Taji prisons were only re-taken after Iraqi officials sent in helicopter gunships and special operations soldiers.


One security official told Reuters on condition of anonymity: "It's obviously a terrorist attack carried out by al Qaeda to free convicted terrorists with al Qaeda."

A simultaneous attack on another prison, in Taji, around 20 km (12 miles) north of Baghdad, followed a similar pattern, but guards managed to prevent any inmates escaping. Sixteen soldiers and six militants were killed.

Although officials said some of the escapees were quickly recaptured, the majority of the Al Qaeda commanders in custody are said to be at large. Interpol has issued a regional alert for the escapees, saying its working with Iraqi police to obtain pictures of photographs of the fugitives.

Al Qaeda-allied Sunni insurgents have stepped up attacks on Iraqi civilians, policemen and soldiers in recent weeks, killing hundreds. Perhaps the single deadliest single attack in Iraq this month occurred on July 12th, when a suicide bomber blew up a café in Kirkuk as patrons were marking the end of the day's fast for Ramadan, killing at least 38 people.

On Thursday, Sunni gunmen reportedly had set up a roadblock on a highway outside of Kirkuk and executed 14 Shi'ite truck drivers.
Posted by Fenway_Nation at 10:57 PM