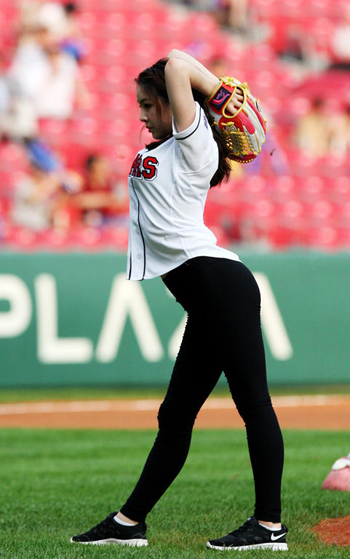 SOUTH KOREA- This has been making the rounds for the last couple of days, but I thought it would be worth a look since it combines a number of things that I enjoy.

That's actually putting it mildly- I think I'm absolutely smitten. But then again, I'm pretty sure the guys in the Doosan Bears dugout are too. 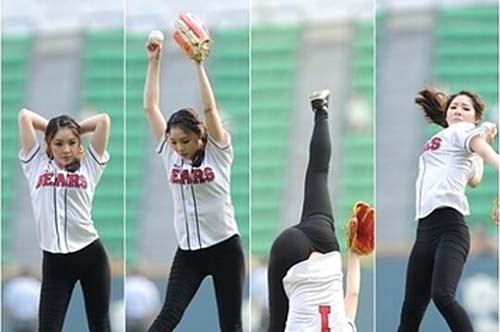 South Korean rhythmic gymnast Shin Soo Jii became an immediate internet sensation with her acrobatic ceremonial first pitch prior to a game between the Doosan Bears and Samsung Lions on July 6th.


In performing her ceremonial pitch ahead of a game between the Doosan Bears and Samsung Lions at Jamsil Stadium in Seoul on Friday, Shin executed what is known as a backward illusion turn.

Leaving one foot planted on the ground, she twisted her body around in a full flip before straightening and launching the ball forward -- somehow still managing to throw an accurate pitch.

A video clip showing her flashy delivery was uploaded to MLB.com the following day.

The clip garnered more than 10 million hits in the span of just a few days and was also featured on the MLB Network's Intentional Talk, hosted by Chris Rose and former Red Sox first baseman Kevin Millar [and hopefully consigning Psy's Gangham Style to the dustbin of history for South Korean viral videos- NANESB!].

Shin Soo Ji competed for South Korea during the 2008 Olympics in Beijing and also during the 2010 Asian Games in Guangzhou, China. By 2012, she had retired from competitive gymnastics but worked as a commentator during the London Summer Olympics. 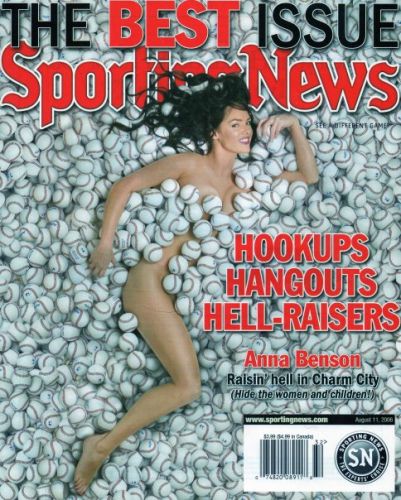 GEORGIA- Oh lord....why is it always the quiet ones?


According to a police report, a fully armed Anna confronted Kris in the Smyrna, Ga., home they once shared, but that she now is under order to vacate. She was carrying a handgun and wearing a bulletproof vest. The former Penthouse model also had a hatchet, expandable baton and a taser in her possession.

Once she was arrested and searched, officers found Anna wearing an ammo belt and carrying a red knife inside her waistband. A bag of syringes was also found in the house, according to the police report. 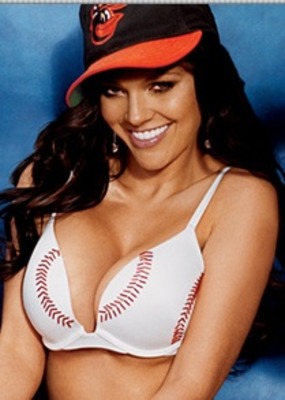 Kris and Anna were married in 1999 when he was with the Pittsburgh Pirates and she was an exotic dancer in an Atlanta nightclub. The Mets acquired Benson at the 2004 trading deadline but he was traded to the Baltimore Orioles the following offseason. Some speculate the trade was fuelled by Anna's antics, which included dressing up as a sexy Mrs Santa Claus for a Mets family-friendly Christmas party and a radio interview on the Howard Stern show where she said she would sleep with all of Kris's teammates if she caught him being unfaithful to her.

While Kris made his last MLB start for the Arizona Diamondbacks in 2010, Anna continued to do interviews and appeared in the World Series of Poker and the reality TV series Baseball Wives. 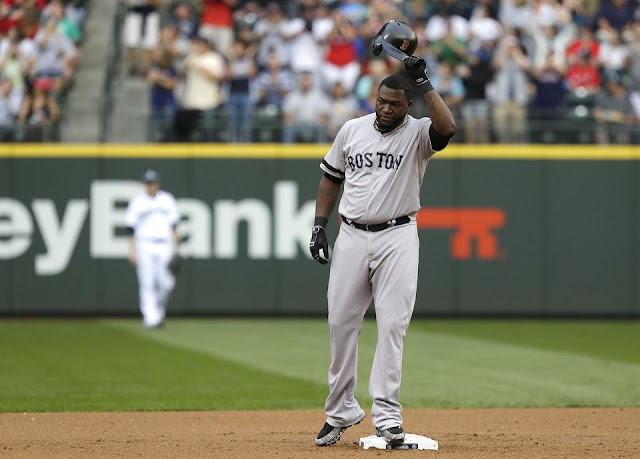 RED SOX- After their west coast road trip got off to a promising start with a 6-2 win over the Angels last Friday, the wheels started to come off following the Saturday night game where the Red Sox squandered a late 4-run lead only to have Josh Hamilton win it for the Angels in extra innings. The Sunday night game was a nationally televised affair and saw Angels starter Jared Weaver and the Angels bullpen throw a shutout against former teammate John Lackey in a 3-0 loss for Boston.

To the casual observer, Monday night's opening game of the Red Sox and Mariners series at Safeco Field had the potential to be a pitcher's duel with Felix Hernandez going up against Jon Lester. However, the reality was that the Red Sox had their skulls caved in by an 11-4 final on Monday night- not a promising start to the series.

Tuesday night's contest at Safeco was a slugfest that saw both starters get chased early- Andrew Webster lasted only 2⅓ innings while Mariners starter Hisashi Iwakuma went all of three innings. The Red Sox would ultimately go on to win by an 11-8 final and David Ortiz would go 4-5 with a solo homer to tie Harold Baines for the all time hits by a designated hitter.

The following night, in the house that Edgar Martinez [mostly] built, Big Papi set the all-time record for hits by a DH with a leadoff double in the top of the 2nd inning, giving him 1689 total hits as DH. He was just getting started, too.

After taking a 2-0 lead in the top of the second thanks for sac-flies from Saltalamacchia and Iglesias, Ortiz would double the Red Sox lead with a 2-run homer in the top of the 3rd, followed by an RBI single from Victorino in the 4th to make it 5-0 Boston. The Red Sox would blow it wide open in the 6th by putting up four more runs and Doubront would cruise to a fairly easy win after allowing all of one earned run on five hits in seven innings of work. The Red Sox would handily win Wednesday night's game by an 11-4 margin.

Seattle still had a chance to salvage a split of the series during Thursday afternoon's game, although it didn't look that way at first. Outfielder Jacoby Ellsbury gave the Red Sox the early 1-0 lead after leading off the game with a solo homer, but the Mariners would jump all over Ryan Dempster in the bottom of the second for four runs, followed by another run in the bottom of the 3rd to give Seattle a 5-1 lead. But the Red Sox would rally in the top of the fourth with a RBI singles from 3B Brock Holt, Jose Iglesias and Jacoby Ellsbury. By the time the fifth inning ended, the game was tied 7-7.

Pawsox callup Steven Wright (not the comedian) went 5⅔ innings without giving up a run after the Mariners bats chased Dempster. The game headed to extra innings and Daniel Nava broke the deadlock with a two out RBI single in the top of the 10th before Koji Uehara closed out the ballgame with a 1-2-3 bottom of the 10th. The Red Sox go on to win by a final of 8-7 and take three out of four from the Mariners in Safeco.

Their West Coast road trip continues Friday night when they head to Oakland to take on the Red Sox West Oakland A's at the Coliseum. John Lackey [6-6; 2.80 ERA] will get the start against Jarrod Parker [also 6-6 with an ERA of 4.04]. First pitch is set for 10:05 ET and the game will be televised on NESN. Among the former Red Sox currently on the Division-leading A's are outfielders Coco Crisp and Josh Reddick along with infielders Jed Lowrie and Brandon Moss.

OTHER RED SOX NEWS- Three Red Sox players have been named to the 2013 AL All Star Team after weeks and weeks of balloting. DH David Ortiz, 2B Dustin Pedroia and starting pitcher Clay Buchholz were voted in to make an appearance at the 2013 All Star Game next week in Citi Field, however, Buchholz is expected to remain on the DL until after the All Star break, so it will just be Ortiz and Pedroia.

Koji Uehara was among the names listed on an MLB 'Final Vote' ballot, but ultimately lost out to Toronto reliever Steve Delabar when the Final Vote balloting was tallied.

This wouldn't be Dennard's first run-in with police in the Nebraska capital- in 2012, he punched a Lincoln police officer who was responding to a call about a fight outside a club and was sentenced to 30 days in jail, 2 years probation and 100 hours of community service.

BOSTON BRUINS- Bruins GM Peter Chiarelli announced this week that the organization has signed both G Tukka Rask and C Patrice Bergeron to 8 year contract extensions. Both Rask and Bergeron's contract are worth an estimated $52 million- or just under $6 million annually.
Posted by Fenway_Nation at 11:14 PM