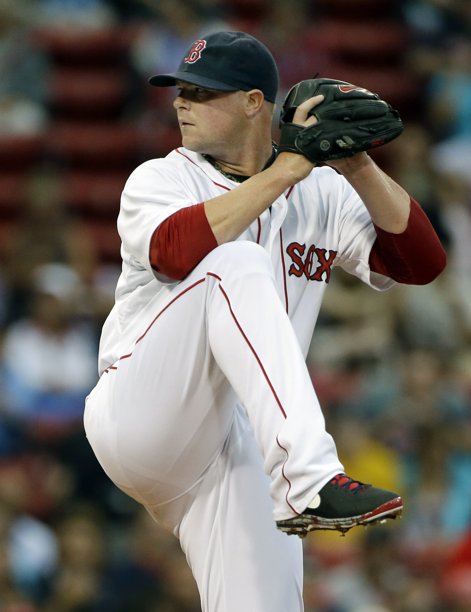 RED SOX- After being shut out by the white-hot Rays on Monday night, the Red Sox saw their lead in the AL East whittled down to merely half a game heading into Tuesday night's contest.

Jon Lester- who was originally slated to start the Sunday night game against the Yankees- had his start pushed back two nights so he could get some additional rest. After opening up the game with a 1-2-3 inning, Lester gave up a leadoff homer to Will Meyers to give the Rays the early 1-0 lead in the top of the second. The Red Sox came back with a run of their own in the bottom of the 2nd thanks to a Mike Carp single after Rays starter Roberto Hernandez gave up singles to Ortiz and Napoli to start off the inning (although Big Papi was thrown out trying to advance to third), tying the game at 1-1. The Red Sox would take the lead in the bottom of the 3rd with runners on first and third and Big Papi at the plate. Pedroia would steal second and Rays catcher Jose Molina's throw hit Pedroia, allowing Victorino to score and giving Boston a 2-1 lead.

The Red Sox would pad their lead with a Pedroia sac fly in the bottom of the 5th to make it 3-1, which is just as well, since Evan Longoria blasted a solo homer to lead off the top of the 6th for the Rays to once again make it a one-run game. However, Boston would get some run support in the bottom of the 8th with two outs and two on when Stephen Drew hit an RBI single followed by a Jose Iglesias single that managed to clang off the gloves of Rays 3B Evan Longoria and SS Yuniel Escobar as two more runs came in for the Sox to give them a 6-2 lead [Even though it was officially scored a 2-RBI single, Iglesias alertly moved to third on the throw home which rolled to the dugout- NANESB!].

Koji Uehara came out in the top of the 9th and had a 1-2-3 inning to preserve the Boston win, and one night after being shut out by the Rays, the Olde Towne Team goes on to win by a 6-2 final. Lester goes 6⅓ innings, allowing 7 hits and two earn runs while striking out 8. Jose Iglesias went 1-4 with 2 RBI and Dustin Pedroia was 0-2 with 1 RBI on Tuesday night. The win by the Red Sox snaps a 6 game winning streak for Tampa Bay that carried over from the All Star where the Rays leapfrogged past the Yankees and Baltimore for 2nd place in the AL East.

The series continues Wednesday night at Fenway with Felix Doubront [7-3; 3.76 ERA] taking the mound against Tampa Bay's David Price [4-5; 4.03 ERA]. First pitch is scheduled for 7:10 ET and for the second time since Sunday, the game will be nationally televised on ESPN while the MLB Network and NESN will carry Thursday night's season finale. 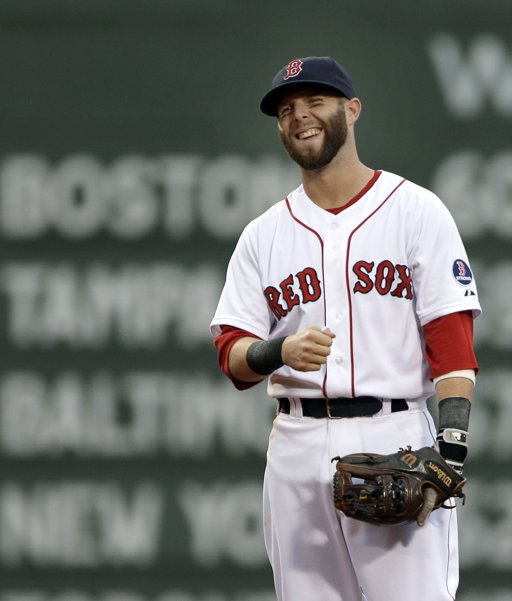 OTHER RED SOX NEWS- It's official.

Prior to last night's game, the Red Sox announced last night that Dustin Pedroia has signed an 8 year, $100 million contract extension that would keep the hard-charging second baseman in a Red Sox uniform through 2021. Peroia's current contract would have expired at the end of the 2014 season. The former Sun Devil was named AL Rookie of the Year in 2007 and AL MVP in 2008 in addition to two gold gloves and being selected to the All Star game twice.

ELSEWHERE IN THE AL EAST- The Baltimore Orioles took a big step towards addressing one of their (few) weaknesses on Tuesday by acquiring Milwaukee Brewers closed Francisco Rodriguez in exchange for infielder Nick Delmonico from the Frederick Keys- Baltimore's Carolina League affiliate.

PITTSBURGH PIRATES- The resurgent Pirates got a scare in the 9th inning of Monday when closer and NL Saves leader Jason Grilli left the 9th inning of their game against the Washington Nationals. While the injury may not be as severe as the Pirates organization had feared, Grilli was put on the 15 DL with a strained right forearm on Wednesday.

On Monday night's game, Grilli allowed a leadoff walk to Washington's Adam La Roche in a 6-3 contest. This was followed up by a Jason Werth homer that made it a 1-run game. With one away, the Nationals Denard Span doubled off of Grilli before the Bucs closer got Nats catcher Wilson Ramos to strike out and was then pulled from the game. Vin Mazzaro then came on for Grilli and managed to get the final out, preserving the Bucs 6-5 win on Monday night.

After missing the playoffs for more than 20 straight years, the Pittsburgh Pirates have gotten off to a strong start both this season and in 2012. However, the second half of the Bucs 2012 campaign saw them gradually fade from playoff contention by Labor Day. Fans are hoping to avoid a repeat of last season's swoon in the Steel City. Currently, the Pirates are only a game and a half behind the St Louis Cardinals for the lead in the NL Central.
Posted by Fenway_Nation at 2:59 PM