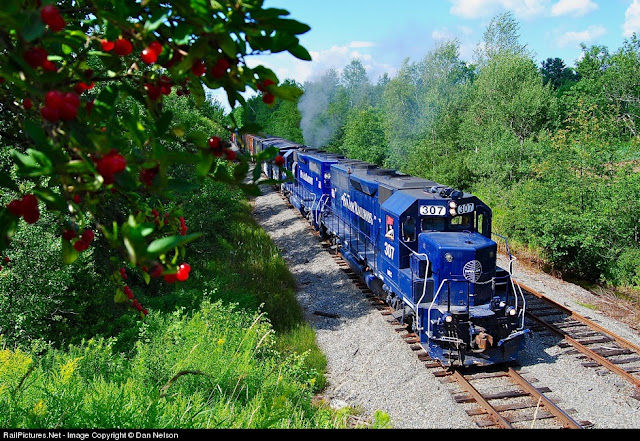 Despite Pan Am aggressively courting oil and intermodal traffic in recent years, paper remains a significant source of traffic for Pan Am and other regionals within the state of Maine- both the chemicals used in papermaking and the finished product have traditionally moved by rail. This remains true despite the fact that many companies in the paper and forestry industry falling on hard times themselves.

Still, even with the paper and forestry industry in decline lately, Pan Am operates a near-daily train between the former Maine Central Rigby Yard in Portland and the mill town of Rumford, ME to the north. The trek between the western Maine mill town and Portland has been a ritual that predates the advent of Pan Am or Guilford by decades.

Here, railpictures.net contributor Dan Nelson caught Pan Am GP40 #307 leading southbound RUPO [RUmford to POrtland, ME- NANESB!] under Route 115 in Yarmouth, ME on July 22nd, 2010. The photographer did an excellent job of framing the southbound freight, which is fairly close to its final destination, with some (and likely inedible) berries off to the right.
Posted by Fenway_Nation at 3:40 PM