Parts of Arizona Considered Under Control of Mexican Cartels and Smugglers: Feds Respond With Lawsuit Against Arizona 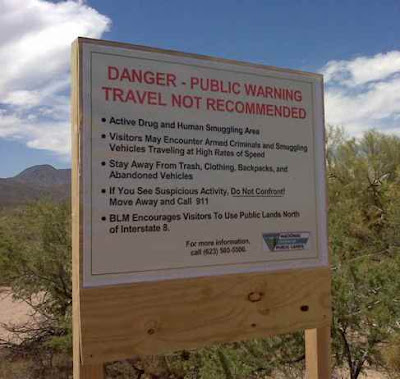 The Department of the Interior's Bureau of Land Management has taken to posting warning signs regarding the potential dangers of encountering human and drug smugglers along lands under their jurisdiction in Southern Arizona last week. While not an outright prohibition of entering BLM lands, the signs warn about encountering armed criminals and smugglers in unusually blunt terms.

The signs were posted over a month after a Pinal County Sheriff's Deputy was shot by suspected drug traffickers while patrolling the area around the junction of Interstate 8 and Arizona Highway 84. Last week, two bodies belived to those of drug mules were found shot to death in the same area where the deputy was ambushed. Pinal County Sheriff Paul Babeu said in an interview Tuscon's KGUN TV that the cartels are in increasing control of parts of Arizona, including Pinal County.


The sheriff admits the cartels are operating in his county and without the federal government's help they can't get control. KGUN 9 News asked Babeu flat out if cartels control parts of Arizona. "Absolutely, they have in terms of the remote areas in the drug corridors in the desert here in west Pinal County. Our government has even erected signs warning citizens to beware this is a known drug corridor," Babeu said.

But don't worry! The Obama Administration is on the case! Besides fighting the spillover from Mexico's narcoinsurgency the blue state way (gun control and blanket amnesty for illegal aliens), US Secretary of State Hillary Clinton let slip in a June 8 interview with Ecuador's NTN24 News that the Department of Justice will be filing a lawsuit against Arizona over their recent anti-illegal immigration bill [still wondering if anybody from the DOJ has actually read it yet- NANESB!]. This was confirmed on Friday by White House officials.

*WHEW!* Good thing all those other problems along the US/Mexican border have been taken care of so that the Obama Administration and the Justice Department can take on one of the 57 states (and a red state his 2008 Presidential opponent currently represents as a senator).

Here's an exit question for you, gentle NANESB! reader- if President Obama wanted to give the middle finger and say 'You don't matter' to red states like Louisiana and Arizona, what would he do differently?
Posted by Fenway_Nation at 10:45 PM