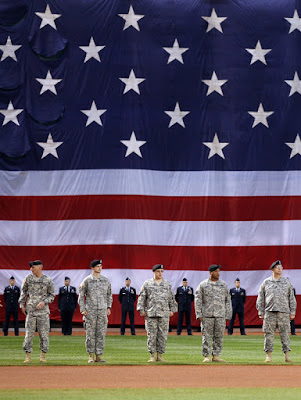 On Friday night, Game 1 handily went to the Red Sox by a 15-5 final. Saturday was the Cubs turn to bat around, putting up 8 unanswered runs in the top of the 8th in their 8-3 win. Armegeddon notwithstanding, that left Sunday night (complete with a pregame ceremony honoring New England servicemen and women) as the rubber game. 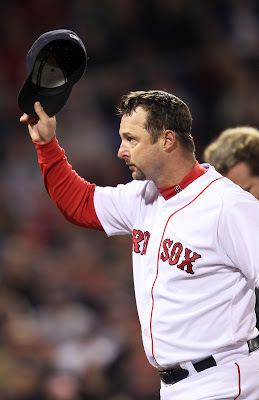 The venerable Tim Wakefield got the start and went 6 and ⅔ strong innings, allowing one run on just four hits while getting run support in the form of a pair of sacrafice flies in the bottom of the 4th and a solo homer by Jarrod Saltalamacchia in the bottom of the 5th, all off of Cubs starter James Russell. The Red Sox would then get some insurance in the form of a 2-out, 2-RBI Kevin Youkilis triple that plated Dustin Pedroia and Adrian Gonzalez in the bootom of the 7th. Papelbon would close out the Red Sox 5-1 win in the top of the 9th and the Red Sox win the first meeting between the two clubs since 2005 (and 1st at Fenway since the 1918 World Series).

The Red Sox will next travel to Jacobs Field on Monday to take on AL-Central leading Cleveland Indians where Clay Buchholz (4-3; 3.42 ERA) will get the start against the Tribe's Justin Masterson (5-2; 2.52 ERA). The game will be televised on ESPN2 with the first pitch scheduled for 7:05 ET. 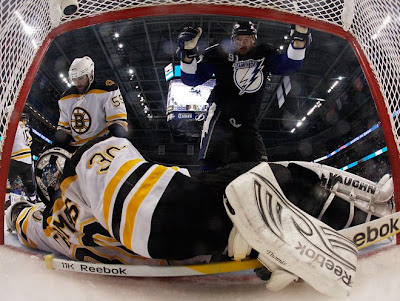 NHL: Two days after shutting out the Tampa Bay Lightning on the road, the Boston Bruins found themselves out to an early 3-0 lead but unable to hold off a frenetic Tampa Bay rally.

Patrice Bergeron would get two goals (one unassisted, one shorthanded) in the first along with a Micheal Ryder tally to get out to a 3-0 lead at the end of the first period (Dwayne Roloson was yanked for Mike Smith between the pipes for Tampa) but that would be it as the Lightning got on the board with a pair of Teddy Purcell goals a little over a minute apart about 7 minutes into the 2nd. Sean Bergenheim would get the game-tying goal just before the 11 minute mark and the 3rd period would close out tied at 3-3.

The Lightning would then take the lead in the 3rd on a Simon Gagne goal, also about 7 minutes in. The game would then be iced for Tampa on a Martin St Louis empty-netter to make it a 5-3 final for the Lightning.

The series heads back to Boston with things knotted up at 2-2. The puck will drop at 8:00 ET and the game will be televised on VS and the CBC
Posted by Fenway_Nation at 12:03 PM