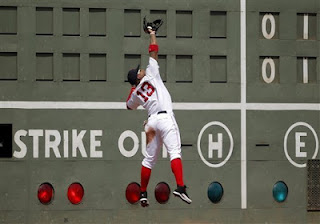 RED SOX- This past week has pretty much personified the 2012 Red Sox- with the struggling club taking two out of three from the Yankees or the Detroit Tigers, but dropping the first three of a four game series to the Minnesota Twins- who aren't quite in the basement of the AL Central, but certainly sitting on the basement steps.

After getting shut out 5-0 in the series opener on Thursday and blowing a 5-1 lead on Friday's 6-5 loss, the Red Sox made it three in a row with Saturday's 6-4 loss. On Sunday, the Red Sox got out to a 2-0 lead thanks to a Carl Crawford RBI groundout and an Adrian Gonzalez RBI single in the bottom of the 3rd.

The Twins would get a run back in the top of the 3th on a Ben Revere RBI sac fly to cut Boston's lead in half, but the Red Sox would add to their lead thanks to a 2-run Adrian Gonzalez homer in the bottom half of the inning to make it 4-1 Boston.

As it turned out, Boston would need those insurance runs as Vincente Padilla led off the top of the 9th by allowing a solo homer to Josh Willingham, followed by a walk to Justin Morneau before giving up a homer to Ryan Doumit to cut the Twins defecit to 6-4. Alfredo Aceves came out to relieve Padilla and got the next three batters out to end the ballgame and halt the Red Sox losing streak at four games.

Franklin Morales went six complete innings for the Red Sox, allowing just three hits, one earned run and striking out four batters. Gonzalez went 2 for 3 with a homer and 3 RBI and Aceves came out for his 23rd save of the season.

On Monday night, the Red Sox hosted the Texas Rangers. After falling behind 1-0 in the top of the first, the Red Sox began to get to Texas starter Yu Darvish, taking a 2-1 lead in the bottom of the 3rd thanks to RBI doubles from Carl Crawford and Adrian Gonzalez. The Red Sox would then add to their lead in the bottom of the 4th on an RBI double from Jacoby Ellsbury, a Carl Crawford sac fly and RBI double from Dustin Pedroia, making it a 5-1 lead. 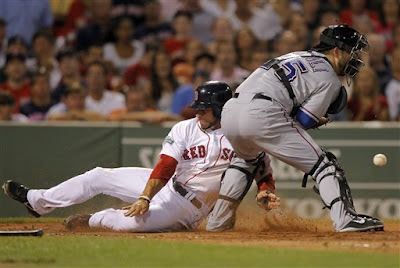 After David Murphy got to Aaron Cook for an RBI single in the top of the second, Cook threw five shutout innings before handing things over to Junichi Tazawa in the 8th while the Red Sox continued roughing up both Darvish and the Rangers bullpen, getting one run in the bottom of the 7th and three more in the bottom of the 8th.

Although Tazawa allowed a leadoff solo homer to former Red Sox 3B Adrian Beltre, followed by a Nelson Cruz single, Tazawa would get the next three batters in order and the Red Sox would go on to win convincingly by a 9-2 final.

Adrian Gonzalez would go 3-5 with 3 RBI while Carl Crawford would go 2-4 with 3 RBI and Dustin Pedroia would go 3-4 with an RBI. Aaron Cook went 7 complete innings allowing six hits, three walks and one earned run.

For Tuesday night, Jon Lester [5-9; 5.36 ERA] gets the start against Ryan Dempster[5-5; 2.82 ERA]. In his Rangers debut, Dempster only lasted four and two thirds innings against the Angels, allowng eight earned runs on nine hits. The game gets underway at 7:10 PM Eastern time and will be broadcast on NESN.

OTHER RED SOX NEWS- With the trade dealing having come and gone, the Red Sox mostly stood pat on July 31st. The did send outfielder Scott Podsednik and RHP Matt Albers to Arizona for reliever Craig Breslow and sent 1B Lars Anderson to Cleveland for RHP Steven Wright.

Josh Beckett left after pitching less than 3 innings in Tuesday night's game against the Detroit Tigers. Although he wasn't placed on the DL, he missed his next scheduled start on Sunday and is expected to go back onto the mound on Wednesday afternoon's game against the Rangers.

DH David Ortiz, out of action since July 16, is still reportedly sore from an achilles strain. Manager Bobby Valentine is uncertain when Ortiz will be returning to the starting lineup.

MLB TRADE DEADLINE- Although the Phillies broke the bank to keep starting pitcher Cole Hammels in the city of brotherly love earlier in July, two-thirds of their outfield were gone by the trade deadline last week.

Meanwhile, in the American league, the Texas Rangers won the Ryan Dempster sweepstakes, sending minor league infielder Christian Villanueva and pitcher Kyle Hendricks to the Cubs. Dempster had reportedly vetoed a proposed trade with the Atlanta Braves while the Dodgers and Yankees had reportedly sought the services of the 35 year old right handed starter.

NFL- The 29 year old son of Philadelphia Eagles head coach Andy Reid has been found dead in a dormitory room at the team's preseason facilities at Lehigh University.


Police said the death was not suspicious, and the cause was under investigation. The coach's oldest son had a long history of drug problems, once admitting "I liked being a drug dealer" and went to prison for a heroin-fueled car crash.

Owner Jeffery Lurie met with the team Sunday and told reporters afterward he expected Reid back this week. The Eagles host Pittsburgh in their preseason opener on Thursday night.

The police chief at Lehigh, Edward Shupp, said a 911 call was made at 7:20 a.m. about Reid, and that the 29-year-old was dead when a policeman arrived at the campus dormitory. The police and Northampton County coroner were investigating.

Reid had been staying at the camp where he assisted the Eagles' strength coaches at camp in an unofficial capacity, a not-uncommon sort of role for NFL coaches' sons. He was frequently seen on the sideline at practices and in the locker room after games. Many of the coaches and staff stay in the Lehigh dorms.

Defensive coordinator Juan Castillo and Offensive coordiantor Marty Mornhinweg will take over coaching duties from Reid until he's expected to return to the team on Thursday.

ELSEWHERE IN THE NFL- After beating the Arizona Cardinals 17-10 in the Hall of Fame Game on Sunday, the New Orleans Saints will next take on the Patriots on Thursday night in NFL Preseason action.

-38 year old free agent WR Terrel Owens has reportedly reached an agreement with the Seattle Seahawks after a tryout at the team's Renton, WA training camp.

Owens last played for the Cincinnati Bengals during the 2010 season, catching 72 passes for 983 yards and nine TDs.

SUMMER OLYMPICS- American swimmer Michael Phelps has capped off his career by becoming the winningest Olympic athelete in the history of the modern games. Phelps had already come into the games tying American swimmer Mark Spitz for total Olympic medals won after Phelps had won during the 2008 Olympics in Beijing. Despite the slow start earlier in the London Games, Phelps won silver as part of the 4 X 100m freestyle relay and the individual 200m butterfly. Interstingly, the previous record holder for winning the total number of Olympic medals- a 77 year old Ukranian named Larisa Latynina who was a gymnast for the Soviet Union between 1956 and 1964- was present for Phelp's race when he broke her record; Latynina had reportedly offered to present Phelps with the silver medal herself, but that was reportedly against Olympic regulations to do so.

Less than 48 hours later, Phelps won the 16th and 17th gold medal of his Olympic career after edging out rival and team USA teammate Ryan Lochte in the 200m individual medley event and then the 100m butterfuly- his last individual event.

Heading into the London Summer Games, Phelps had stated that he would call it a career after the Olympics. With that in mind, the final event Phelps would be participating in would be the 4 X 100M medley relay in which Phelps and Team USA took gold.

Between the 2004 Athens games, the 2008 Beijing Olympiad and this year's London Olympics, Phelps retires with 18 gold medals, two bronze and two silvers. Phelps also holds a world record in the 100m and 200m butterfly event and 400m individual medley.

ELSEWHERE IN OLYMPIC SWIMMING- It isn't just Phelps who's having a good Olympics at the pool. Dana Vollmer, Missy Franklin, Rebecca Soni and Allison Schmidt brought home the gold for Team USA in record breaking fashion for Team USA in the women's 4 X 100m individual medley relay, clocking in at a new world record of 3:52.05. Overall, The USA women's swimming team has won 8 gold medals, 3 silver and 3 bronze medals in the individual and relay events in London. 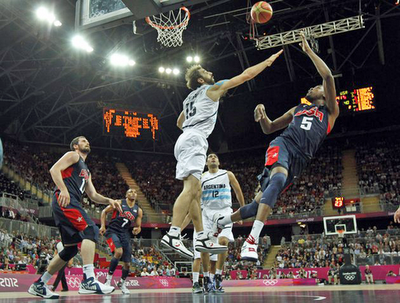 OLYMPIC BASKETBALL- After surviving a late scare from Lithuania in which Team USA went on to hold on for a 99-94 win over the dimunitive former Soviet republic, the all-star American team would go on to face Agrentina- gold medalists in the 2004 Olympics.

After a back-and forth first half in which the USA went to the locker room with a 60-59 lead, the USA came out dominant in the second half- outscoring Argentina 42-17 in the 3rd quarter alone. Team USA would go on to win by a final of 126-97; Kevin Durant lead the scoring with 28 points. Things got testy in the 2nd half when Carmello Anthony took a knee to to the groin from Argentina when it was becoming apparent that Team USA was running away with it.

The Americans will face the Australian team next, with the match scheduled for Wednesday.

OLYMPIC SHOOTING- The USA has swept the skeet shooting events by taking gold in the men's skeet event.

After USA Shooting teammate Kimberly Rhode made history by becoming the first Olympian to win medals in five consecutive Olympics, United States Army Sgt Vincent Hancock took the gold in the men's skeet shooting event. The 23-year old was by far the yongest in the qualifying round and had hit a record-setting 123 out of 125 targets in the qualifying round. WOMEN'S VOLLEYBALL- The USA Women's volleyball team remains undefeated through the 2012 Olympics. On Tuesday, they swept the Dominican Republic team 3 sets to none to advance to the semifinals. Destinee Hooker again figured prominently in the win with 19 points for Team USA in the 25-14, 25-21 and 25-22 sweep of the Dominican Republic.

In the preliminary round, the USA women's team have bested South Korea, China, Brazil, Turkey and Serbia. The women will now await the winner of the Italy/South Korea match later on Tuesday to see who they will play next. 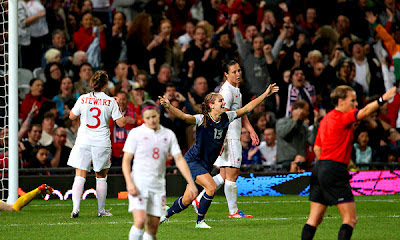 WOMEN'S SOCCER- The USA Women's Soccer team advances to the gold medal round to face the Japanese women's team in a rematch of last year's World Cup.

They had to rally against the upstart Canadian women's team on Monday- not only did Christine Sinclair get Canada on the board first, she accounted for all three of Canada's goals. The USA was able to tie the contest up on two goals from Megan Rapinoe and another from Abby Wambach to force extra time with Alex Morgan getting the Game winner for USA at the 120th minute for the 4-3 win.
Posted by Fenway_Nation at 12:47 PM