Today's Train of Thought- Tiptoe Through Across the Tulips, August 18, 2012 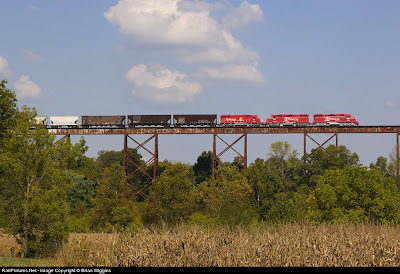 Today's Train of Thought takes us to the Hoosier State and the Indiana Railroad, which had just turned 25 last year. The INRD started in 1986 when the Illinois Central Gulf was in the process of divesting themselves of several unwanted subdivisions- although some of them, such as the Chicago Central and Pacific were eventually brought back into the Illinois Central fold before the IC itself was acquired by Canadian National.

The Indiana Railroad started out with the original former Illinois Central line between Newton, IL and downtown Indianapolis before expanding considerably in the last decade- north via trackage rights to Chicago and south to Louisville, KY- at first by the former CSX line between New Bedford, IN and Lousville and then via haulage rights over the Louisville and Indiana. The INRD has also been working with Rail America's Indiana Southern to construct a 5-mile branchline from scratch to service Peabody Coal's Bear Run Mine in Sullivan County, IN.

Here, railpictures.net contributor Brian Wiggins catches a trio of freshly-painted GP38s trundling across the Richland Creek Viaduct, also known as the Tulip Viaduct in Tulip, IN on a sunny October 2007 day. With the corn in the foreground harvested, GP38-2 #3805 en route to Indianapolis after working the Indiana Southern interchange in Switz City.
Posted by Fenway_Nation at 8:38 PM