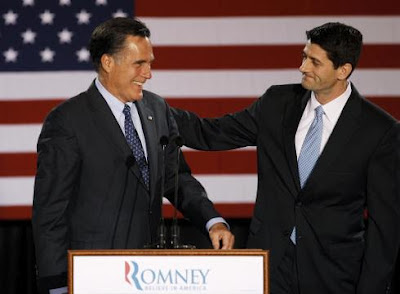 GOP Presidential candidate Mitt Romney announced his VP selection at a campaign event in Virginia over the weekend. An announcement from the Romney campaign that a VP decision would be made over the weekend led to a flurry of rumors on social networking sites like twitter and unsubustantiated media reports on Friday night. Romeny introduced Wisconsin Representative Paul Ryan [R- WI 1] as his running mate in front of the battleship USS Wisconsin at Norfolk, VA on Saturday.

Ryan, who chairs the House Budget Committee, had a number of high profile clashes with the Obama Administration over the federal budget, entitlement reform and the debt ceiling since 2010 when the GOP became the majority in the House after a number of Tea Party swept into office.

Romeny's Ryan pick has reportedly energized a conservative and Tea Party base who were wary of Romney's credentials as a moderate, with the selection garnering praise from a number of Tea Party affiliated PACs. The pick also puts the focus of the 2012 Presidential campaign squarely back on the economy.

The duo appeared before large and enthusiastic crowds in the swing states of Virginia, North Carolina and Ryan's native Wisconsin over the weekend. Like the Supreme Court ruling that upheld 0bamacare as a tax, the Romney campaign enjoyed a massive surge in donations shortly after the Ryan announcement was made- reportedly collecting as much as $3.5 million in the 24 hours after the two appeared in front of the USS Wisconsin.

Democrats, the media and Obama-alligned PACs reacted fairly predictably, claiming that the Ryan pick was a sign of 'desperation' from the Romney camp and struggled to portray the two as being out-of-touch Washington insiders who sought to take away entitlement programs from the elderly and women. However, the fundraising and large crowds turning out in battleground states to see both Romney and Ryan belied such claims from the Democrats. Also, the nominee could've been Pawlenty, Jindal, Chrisite or Portman and I imagine the left, the media and the Obama campaign would've been saying the exact same things about them, only altering the name for the script.

After appearing at a campaign event in Waukesha, WI, on Sunday the Romney camp announced that he and Ryan would be campaigning seperately until the Republican convention in Tampa at the end of the month. Ryan was slated to appear at the Iowa State Fair on Monday while Mitt Romney is supposed to head to Florida.
Posted by Fenway_Nation at 12:50 PM