Line at Chick-Fil-A in Houston, TX on August 1, deemed by some Traditional marriage and First Amendment supporters to be "ChickFilA Appreciation Day"

Atlanta-based ChickFilA reported that the single day sales record for their restaurant chain had been shattered on Wednesday, Aug 1st- in what many supporters had billed 'ChickFilA Appreciation Day'. Some ChickFilA locations were so crowded that extra employees were called in to direct traffic in the parking lots and other locations reportedly ran out of food hours before they were scheduled to close for the night.


The privately held company declined to give specific sales figures but released a statement confirming that frenzied sales of chicken sandwiches and cross-cut waffle fries had made for a record-setting day.

"We are very grateful and humbled by the incredible turnout of loyal Chick-fil-A customers on August 1 at Chick-fil-A restaurants around the country," said Steve Robinson, executive vice president of marketing, in the statement. "While we don't release exact sales numbers, we can confirm reports that it was a record-setting day."

The support for the chicken sandwich chain wasn't limited to the Bible Belt either, as lines were wrapped around the building at locations from New Hampshire to California on Wednesday. While some customers lining up on Wednesday no doubt disagreed with ChickFilA CEO Dan Cathy's statements opposing same-sex marriage, it became a First Amendment issue when the mayors of Boston and Chicago threatened to use their offices to block any attempt at ChickFilA to set up shop or expand in their respective cities. 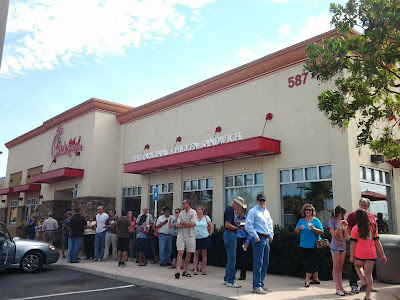 Another line at a ChickFilA location in suburban San Deigo, CA on August 1

A video filmed at a ChickFilA Drive-Thru in Arizona- apparently shot on ChickFilA appreciation day- shows a motorist videotaping himself pulling up to the window and asking for a free cup of water before berating the cashier over the CEO's recent statements.

Although he quickly erased the original video, a number of unedited copies went up on YouTube under different accounts. Within 24 hours, the man was identified as Adam Smith, a Chief Financial Officer with Tuscon-based medical equipment manufacturer Vante. By Thursday afternoon, Vante had reportedly dismissed Smith after deciding the video of himself at ChickFilA demonstrated that he had shown poor judgement. Smith has subsequently apologized to the cashier in another video released onto YouTube, but in that same video, he holds himself blameless for the series of events leading up to the loss of his job.

I suspect most of the participants of the ChickFilA Same Sex Kiss-In DIDN'T look like this, but a guy can dream, can't he?

On Friday, although not as well attended as the ChickFilA Appreciation Day, gay marriage supporters staged a same-sex 'kiss-in' at some locations. On Thursday, a Chicago-based LGBT group filed suit against ChickFilA with the Illinois Department of Human Rights alleging that the resturant's "intolerant corporate culture" violates state law and a provision in Illinois' Human Rights Act, although the suit declines to specifically mention any instances of harassment or discrimination against homosexual customers and employees.
Posted by Fenway_Nation at 11:51 PM