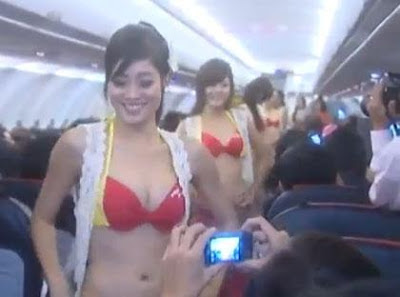 Vietnam's only privately-run airline was fined by aviation officials in that country after video surfaced of bikini-clad beauty pageant contestants dancing in the aisles as music blared and appreciative male passengers snapped photos as their flight was underway.

In a letter to Vietnamese aviation authorities, Hanoi-based VietJet said that the local beauty queens were part of the in flight ceremonies celebrating the low-cost carrier's innagural flight from Ho Chi Minh City [aka Saigon] to the southern coastal city of Nha Trang earlier this month. A VietJet employee who declined to be identified said that the performance in no way violated safety guidelines.


In a letter to Vietnamese authorities Tuesday, the company said the event inaugurated its first flight from Ho Chi Minh City to Nha Trang on the southern coast. It said all safety regulations were followed. A company spokeswoman refused to comment on the fine Friday, but confirmed the local beauty queens were paid for their performance. She would not give her name because she was not authorized to speak to the media.

Photos and video also show the bikini-clad women handing out stuffed animals to passengers as prizes or souveniers. 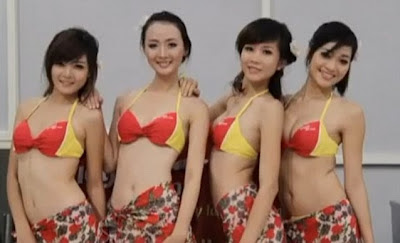 Like the viral video of Australian hurdler Michelle Jenneke, I opted to go with the non-musical video since the music dubbed in after the fact is pretty loud and grating.