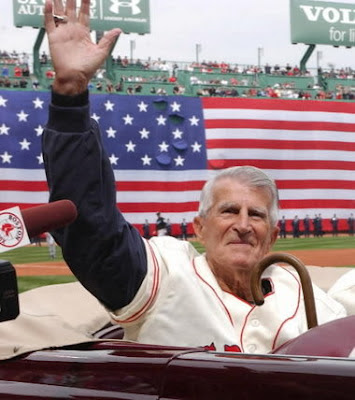 Legendary former Red Sox infielder and manager Johnny Pesky passed away at a hospice in Danvers, MA on Monday. He was 92.

As both a player and a manager, Pesky wore many hats and many uniforms, but the popular infielder would always find his way back to the Hub, where even during Boston's 2004 and 2007 championship runs, he became a fixture around the Red Sox clubhouse.

Born as John Michael Paveskovich in Portland, OR to Croatian parents in 1919, Johnny Pesky was part of the Red Sox minor league system for two years before making his big league debut in 1942 with Boston. His first year, he set a club record for hits by a rookie with 205- a mark that stood until shortstop Nomar Garciaparra's arrival in 1997.
Pesky, like many of his contemporaries at the time, gave some of the prime years of his playing career to serving his country at the height of World War Two. According to Springfield Republican sportswriter Garry Brown, both he and teammate Ted Williams underwent flight training at Turners Falls, MA in rural Franklin County in 1942 as part of the US Navy's V-12 program.

His first full season back with the Red Sox was in 1946 where they captured the American League pennant only to lose to the St Louis Cardinals in seven games. Pesky was arbitrarily blamed for allowing the pivotal run- Enos Slaughter's 'mad dash'- to score in Game 7 by hesitating to throw home on Harry Walker's base hit, even though the grainy footage filmed at the time exonerated him.

Never a power-hitter, the right-field foul pole 302 feet away from home plate at Fenway Park bears his name because according to various sources, most of his 17 career home runs wrapped around the pole at short right field. 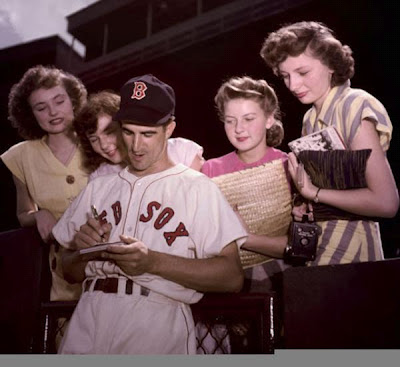 In 1952, the Red Sox did the unthinkable and traded Pesky to the Detroit Tigers, where he was batting .275 in three seasons with Detroit. Pesky's last full season in the bigs was spent with the Washington Senators in 1954 where he appeared in 49 games. He retired from the game with 17 homers, 404 RBI and a career .307 batting average between Boston, Detroit and Washington.

Even with his playing career over, Pesky still was actively involved with the Red Sox by 1961, managing their AAA club out of Seattle. By the end of the 1962 season, owner Tom Yawkey had offered Pesky a chance to return to Boston as manager. A number of second place finishes and some of his own players undermined Pesky and he departed with a few games remaining in the 1964 season. From 1965 to 1967, Pesky was first base coach for the Pittsburgh Pirates and managed their AAA affiliate in Columbus in 1968.

By the 1969 season, Pesky had once again returned to Boston, this time in the booth, but by 1975, he was in uniform once again as a coach. In fact, he can be seen prominently in the background of footage and still photos of Red Sox catcher Carlton Fisk 'waving' the ball fair during Game 6 of the 1975 World Series against the Cincinnati Reds.

When manager Don Zimmer was fired by Tom Yawkey in 1980 with nearly a week remaining in the season, Pesky was appointed interim manager. The following season, he came back as the clubs bench coach. In 1990, he was named the interim manager of the Pawtucket Red Sox when the minor league club's manager, Ed Nottle, was fired in June.

Pesky was present in St Louis for the clinching Game 4 of the 2004 World Series in which the Red Sox snapped an 86 year World series drought and figured prominently in the 2005 Opening day ceremonies in which he was given a championship ring along with members of the 2004 squad and raised the championship banner along with Carl Yastrzemski. Pesky was also invited to raise the 2007 World Series Champion banner on the opening day of the 2008 season. That same year, his #6 was retired by the Red Sox in a late-season ceremony at Fenway.

Off the field, Pesky's friendship with former teammates Dom DiMaggio, Ted Williams and Bobby Doerr is the subject of David Halberstam's 2003 book The Teammates. In 2010, a statue depicting the quartet from the 1946 Red Sox was unveiled outside of Fenway Park. Williams had passed away in 2002 while Dom DiMaggio- the younger brother of Hall of Famer Joe DiMaggio- died in 2009.

Doerr and Pesky- both born and raised on the West Coast- were on hand for ceremonies marking the 100th anniversary of Fenway park earlier this season.

Within an hour of the announcement of Johny Pesky's passing, condolances for Pesky's family and the Red Sox organization poured in from all over the big leagues.

Honored to have had an opportunity to meet one of the biggest ambassadors of the Redsox Mr. Johnny Pesky #pesskkkkyyy
— Darnell McDonald (@MacDime54) August 13, 2012

One of my career memories was hugging and kissing Johnny pesky after we won it all in 04, God Rest and God Bless his gentle soul, I miss you
— Curt Schilling (@gehrig38) August 13, 2012

"The national pastime has lost one of its greatest ambassadors today." - Commissioner Bud Selig on passing of Johnny Pesky.
— MLB (@MLB) August 13, 2012

RIP Johnny Pesky. You will be missed in the clubhouse and by #RedSoxNation.
— Jacoby Ellsbury (@JacobyEllsbury) August 13, 2012

While Monday is a travel day for the Red Sox (who will continue their road trip in Baltimore on Tuesday night), in the Bronx, the New York Yankees observed a moment of silence in honor of Johnny Pesky with an image of him on the park's video scoreboard before their game against the Texas Rangers.

Johnny is survived by his son David.
Posted by Fenway_Nation at 5:41 PM