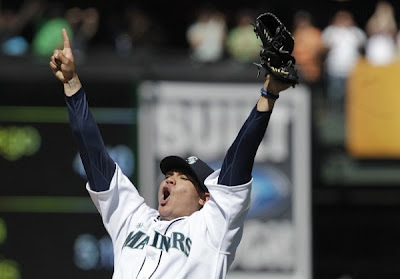 The only run Seattle would get came in the bottom of the 3rd on an RBI single from DH Jesus Montero, but it was all the Mariners would need as 'King Felix' went all nine innings and struck out 12 batters on 113 total pitches.

Hernandez's brush with perfection is the first time in MLB history that there have been three perfect games thrown in a season- the White Sox Philip Humber had thrown a perfect game against the Mariners back in April while San Francisco's Matt Cain struck out 14 Houston Astros in mid-June while throwing a perfect game of his own. Hernandez's perfect game was the 23rd one in the history of the big leagues.

So far in the 2012 season, there have been six no-hitters with half of them taking place at Seattle's SafeCo Field. In addition to the perfect games thrown by the Humber and Hernandez, the Mariners pitching staff combined for a no-hitter using six pitchers against the Los Angeles Dodgers on June 9th.

Unlike the Ryan Braun announcement in which Braun immediately challenged the results and it was subsquently learned the sample was improperly handled before testing, Cabrera admitted to taking a banned substance and issued an apology to fans and teammates.

With the suspension, Cabrera's season if effectively over. Should the Giants make it to the playoffs, he will still be under suspension. If the Giants miss the playoffs, Cabrera will serve out the remainder of his suspension for whichever team he is playing for, since he's a free-agent at the end of this season.

Cabrera went 2 for 3 with a homer and 2 RBI at this year's All Star Game in Kansas City, garnering MVP honors at the Mid-summer classic. The National League handily beat the American League by an 8-0 final this year, but Cabrera's drug test results have led to calls from some to invalidate the results of the game. Since 2003, the winner of the All Star game determines who recieves home field advantage in the World series. The exact date of when Cabrera underwent the drug test hasn't been released by MLB.

This season, Cabrera has been batting .346 with 11 homers and 60 RBI for the Giants. After losing to the Washington Nationals at home on Wednesday, the Giants presently trail the LA Dodgers by a game in the NL West and will be harmed by Cabrera's abesence from the starting lineup. Cabrera has also harmed himself due to the fact he was slated to be a free agent at the end of the season. If he did manage to sign with another team next season, he would miss time with them should the Giants not make the postseason this year.

RED SOX- I guess it was too much to ask to have two no-hitters in one day on Wednesday.

Following a report from Yahoo.com sports that a number of players had met with Red Sox management to demand that manager Bobby Valentine be fired immediately, the travelling soap opera took to the field at Camden Yards on Wednesday after dropping the series opener 7-1.

Red Sox starter Aaron Cook appeared to be cruising, getting a 2-0 lead in the top of the 5th thanks to an RBI ground-rule double from Jacoby Ellsbury and a sac fly from Carl Crawford. Cook threw five innings of no-hit baseball, but in the bottom of the 6th inning, the wheels came off as he led off the inning with a walk to Nick Markakis then gave up back-to-back singles to JJ Hardy and Nate McClouth to break up the no hitter and the put the O's on the board. Cook then air-mailed a comebacker to him from Adam Jones into center field. Cook would then give up a ground rule double to Matt Wieters before being pulled by Valentine. Mark Reynolds then belted a 2-RBI double off of Junichi Tazawa to make it a 5-2 Baltimore lead. Although a run would come home for Boston in the top of the 7th on a Carl Crawford groundout to make it a two run game, Baltimore's pitching staff was able to hold on to the lead and shut the Red Sox down by a 5-3 final.

The Red Sox will try and avoid the sweep on Thursday night when Clay Buchholz [10-3; 4.24 ERA] will take to the mound against Baltimore's Chris Tillman [5-2; 3.40 ERA]. The game gets underway at 7:05 ET and will be televised on NESN and MASN. 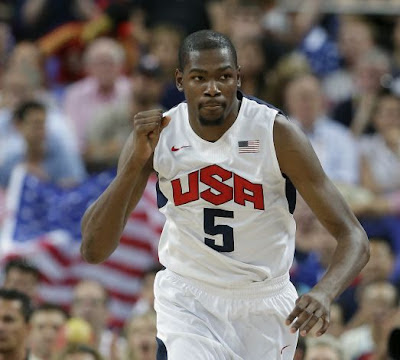 SUMMER OLYMPICS: BASKETBALL- Team USA held off a late challenge from Spain in the gold medal game. Once again, Kevin Durant led the scoring for Team USA with 30 points.

In the second half, Spain had whittled down the USA lead to just one point, but USA started to pull away late and win by a final of 107-100 in the gold medal game for their second consecutive gold medal. 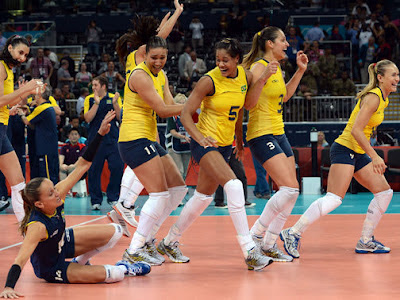 SUMMER OLYMPICS: VOLLEYBALL- After Brazil's womens volleyball team gave away the first set in the gold medal game thanks to a series of unforced errors against Team USA, the Brazilians stormed back to win three straight sets to clinch the gold medal for the second straight summer Olympics. 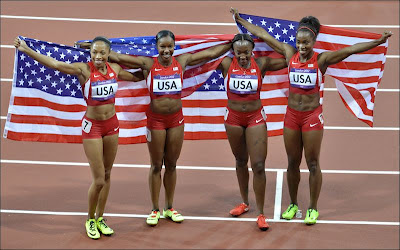 The Jamacian women's team finished at 41.41 secinds while the Ukranian team finished at 42.04 for the bronze. The previous world record was 41.37 seconds held by East Germany, which was set in 1985.
Posted by Fenway_Nation at 10:44 PM