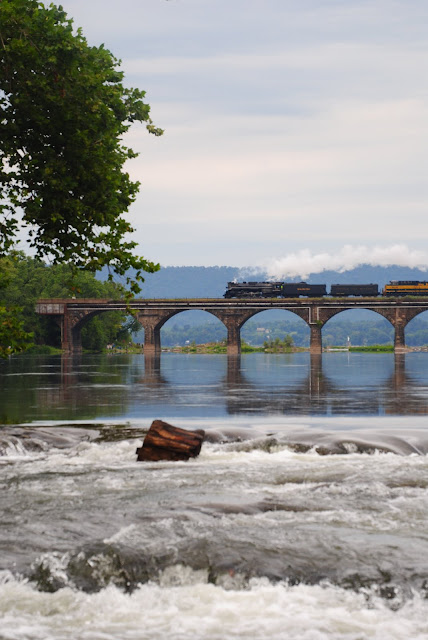 NORFOLK SOUTHERN- Throughout much of their 22-state system, the Norfolk Southern railroad has been observing its 30th anniversary with a employee specials powered by steam locomotives from NS predecesors.

This included the Fort Wayne Railroad Historical Society's Nickel Plate Berkshire #765 making a rare trip to the Keystone State to power employee specials out of the NS facilities at Conway and Enola, PA [just outside of Pittsburgh and Harrisburgh, respectively- NANESB!]. 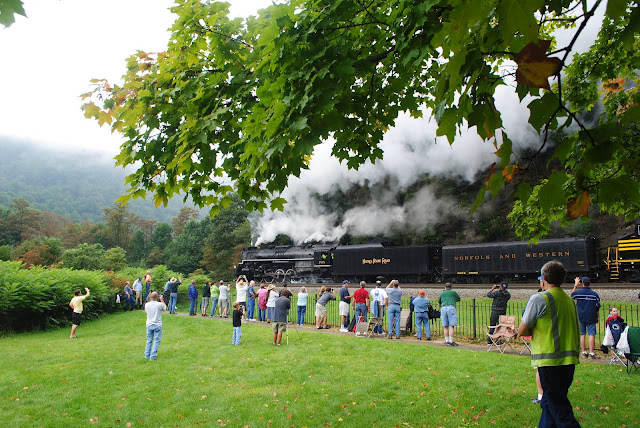 Scores of rail enthusiasts, photographers and onlookers record the big Nickel Plate Berkshire #765 as she storms through Horseshoe Curve in Altoona, PA on her way back to Indiana on August 20.

With Norfolk Southern Nickel Plate heritage ES44AC #8100 trailing, the 765 steamed across the Alleghenies on the former Pennsylvania Railraod mainline from Conway to Enola under her own power on August 13th. The 765's Keystone state sojourn marked the first time since 1977 that the famed Horseshoe Curve just west of Altoona has seen a steam engine pass through the landmark under her own power- former Pennsy K-4 4-6-2 #1361 was on static display at Horseshoe Curve until the 1980s.

It had also been nearly as long since a steam locomotive crossed the ¾ mile former Pennsy stone masonry Rockville bridge [the Aug 19th run shown at the top of this entry] over the Susquehanna north of Harrisburg. Interestingly, in addition to the dozen or so coaches and equipment cars for the #765, the train had made the ferry moves from Conway to Enola and back with four NS gondolas in tow- at least two of them loaded down with coal and one carrying a front-end loader, making the 765's ferry move and return trip to Indiana undoubtedly the most popular mixed train to operate in Pennsylvania in decades.

Earlier in the month, the 765 had powered employee specials on the former Norfolk & Western Pocohontas Division and in early September will head to Missouri to operate specials out of the St Louis area.

The 765 wasn't the only steam locomotive active on Norfolk Southern this summer, however. Norfolk Southern's original partners in the pilot excursions for the 21st Century Steam- the Chattanooga, TN-based Tennessee Valley Railroad Museum- provided the use of their recently restored 1904 built 2-8-0 Consolidation for a series of employee excursions throughout the southern part of the Norfolk Southern system.

The former Southern Railway ALCo steamer spent a good deal of this summer on 'home' rails powering excursions out of Atlanta, GA, Chattanooga and Knoxville, TN as well as Bristol and Roanoke, VA. She reportedly suffered some mechanical difficulties while on one excursion out of Bristol, leading the Norfolk Southern to pinch hit with their Savannah & Atlanta-painted heritage SD70ACE. The #630 was reportedly brought back to Chattanooga for inspection where she was recently put back in service hauling the TVRM's Missionary Ridge excursion trains this month.

The TVRM is also working on restoring 101 year old former Southern 2-8-2 Mikado #4501. Given the Baldwin's Southern Railway ancestry, it's also highly likely that the #4501 would also be made available for Norfolk Southern excursions and specials. 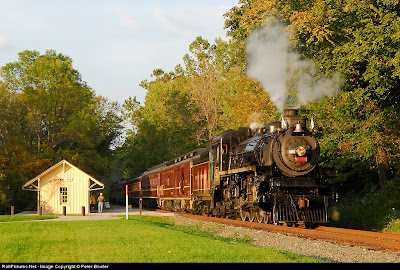 OHIO- Northeastern Ohio's Cuyahoga Valley announced that they will be holding their 'Steam in the Valley' event, with Ohio Central's former Canadian Pacific 4-6-2 reportedly doing the honors on September 8th..

This would mark the first time since the Genesee & Wyoming's 2008 acquisition of the Ohio Central that locomotives from the former OHCR system would be operating. With GWI's acquisition in 2008, former OHCR CEO Jerry Jacobsen began working on building a roundhouse from scratch from a 34 acre lot in Sugarcreek, Ohio. Although the 2008 transaction with Genesee & Wyoming's included all the modern equipment, Jacobsen retained possession of the OHCR's steam fleet and some vintage rolling stock while construction began on the Age of Steam roundhouse. Interestingly, although Jacobsen had reportedly carved out a provision to retain possession of all ten steam engines, the Age of Steam Roundhouse reportedly has no plans to operate excursions over the OHCR, instead oping to allow tourist lines to make use of some of the former OHCR fleet as well as operate over the Ohio Central for break-in runs and transiting to another tourist line. Apparently the Cuyahoga Valley Scenic is the first railroad since the Genesee & Wyoming takeover to borrow one of the former OHCR's steam loco from the Age of Steam.

Interestingly, since former Canadian Pacific #1293 is no longer part of the Ohio Central's steam fleet, the locomotive will reportedly revert back to its Canadian Pacific lettering. Since the GWI takeover of the Ohio Central, the Fort Wayne Railroad Historical Society's Nickel Plate Berkshire #765 has put in a couple of appearences for the Buckeye State scenic railway.

Started up in 1972 on a former Baltimore & Ohio branch between Cleveland and Arkon, OH, 2012 marks the 40th anniversary of CVSR operations through Cuyahoga Valley National Park. The historic line dates back to 1880 and much of its route parallels a former Ohio & Erie canal and towpath.
Posted by Fenway_Nation at 1:54 PM