Borderline Psychosis Update- US Officials Shot, wounded by Mexican police; Off to the Races- Zetas Racehorses Up For Auction; Cartels Trying to Gain Foothold in Sin City; 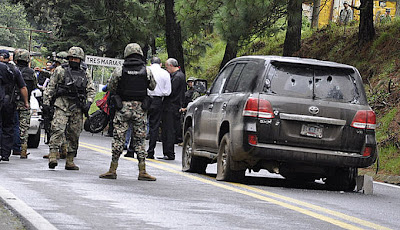 MORELOS- Mexican prosecutors and US State Department officials are trying to determine what happened after Federal police officers and gunmen in civilian clothes opened fire on US Diplomatic vehicle outside of the resort city of Cuernavaca over the weekend, wounding two Americans attached to the US Embassy in Mexico City and a captain in the Mexican Navy.


The two Americans, attached to the U.S. Embassy in Mexico City, were hospitalized with gunshot wounds and reported in stable condition. A Mexican naval captain traveling with them sustained minor injuries in the Friday attack.

No one disputes that Mexican police opened fire on the Americans' black armored Toyota with diplomatic license plates. The question is why.

The Americans were traveling on the road to Cuernavaca, a popular tourist resort south of Mexico City, when their vehicle was intercepted by a carload of gunmen who gave chase as the Americans attempted to escape, U.S. and Mexican officials said. Federal police in at least three patrol cars joined the chase and opened fire on the Americans until the Mexican military, summoned by the naval captain under fire, intervened.

The carload of gunmen and the federal police reportedly fled the scene at that point.

Pictures of the heavily damaged car showed the front passenger window splattered with bullet holes and most of the tires blown out. More than 30 spent casings reportedly littered the roadway where the crippled vehicle came to a stop.

The Reforma newspaper quoted an unnamed Mexican marine who was part of the rescue effort as saying the police and the first group of gunmen appeared to be working together.

"This was an aggression by the federal police," the marine said, according to the paper. "We don't know who they are working for."

A federal judge in Mexico ordered at least 12 Federal police officers involved in the shooting to be placed under house arrest on Monday. Remnants of the Beltran-Leyva cartel, reconstituting themselves as the Cartel de Pacifico Sur in 2010, are active in the state of Morelos.

In February of 2011, assailants from a local Zetas cell pursued two US Immigration and Customs Enforcement Agents (ICE) in a clearly marked Suburban with US Diplomatic plates and opened fire on the vehicle after running it off the highway in San Luis Potosi. Agent Jamie Zapata was fatally shot by the gunmen and his partner Victor Avila was wounded.

NICARAGUA- A Nicaraguan judge ordered 18 people caught attempting to enter the country from Honduras with more than $9 million in cash placed into 'protective custody' on Saturday.

The detained individuals, which reportedly include a former Mexican police officer, will face a September 5th court date where they will face charges of money laundering. The party was travelling in multiple vehicles bearing the logo of Mexico's Televisa network and claimed they were journalists. Televisa later confirmed that none of the detained individuals were working for their network.

While some speculate that the cash was ultimately destined for Colombia in a deal brokered between the cartels in Mexico and Colombia, the bogus journalists were caught just days before a high profile trial in the capital city of Managua where 24 people stand accused of trafficking Colombian drugs to Guatemala where they would ultimately be handed off to Mexican cartels.

NEW MEXICO- A Federal judge in Texas ruled that more than 400 racehorses seized in June during a coordinated series of raids on horse farms in Oklahoma and New Mexico can be put up for auction. Federal prosecutors allege that high ranking members of the Zetas invested proceeds from their drug trafficking into breeding and training racehorses.


Authorities seized 49 of the most valuable horses and claimed control of the remaining 414. Prosecutors said in court documents that four horses have died. Others have been injured due to overcrowding. Caring for the horses is also expensive.

In a number of instances, its not unusual for bidders of opaque origins to pay large sums of cash for prize racehorses at auction.

According to an affidavit filed in support of the June search warrant, a senior member of the Zetas had bragged about rigging the 2010 American Quarter Horse Association's All American Futurity at New Mexico's Ruidoso Downs.


Just after he watched his quarter horse win almost $1 million at a prestigious race in Ruidoso two years ago, one of the main leaders of the brutal Los Zetas drug cartel boasted that he had fixed the race by bribing the people who held horses in the gates, according to a federal court document.

Another informant said the horse, Mr Piloto, was doped with drugs purchased in Juárez before his long-shot win at the 2010 All American Futurity, the affidavit said.

It's unclear whether the claims are true or just boasts by members of Mexico's macho cartel culture. Seven people were arrested on charges that Los Zetas laundered $20 million since 2009 in U.S. quarter-horse racing -- much of it in Ruidoso.

A federal grand jury sitting in Austin on May 30 indicted Miguel Treviño in connection with the alleged money laundering. Federal prosecutors describe Treviño, 38, as "co-leader" of the Nuevo Laredo-based Zetas, who are known for ruthlessly killing and dismembering scores of victims.

Also indicted was his brother, Oscar Omar Treviño Morales, known as "42," whom the indictment describes as also a member of Los Zetas' leadership. Both brothers are believed to be in Mexico.

Agents on Tuesday arrested a third brother, Jose Treviño Morales, 45, and his wife, Zulema Treviño, 38, in Oklahoma. They ran a company, Tremor Enterprises LLC, that is accused of helping launder drug money by buying, selling and racing quarter horses.

Federal agents searched property used by Jose and Zulema Treviño and Trevor Enterprises in Balch Springs, Texas, on Tuesday. The affidavit, in which claims about race fixing and horse doping are made, supports the warrant to search the property.

U.S. officials have offered a $5 million reward for information leading to the arrest of Miguel Treviño.

The affidavit says he, his brother Oscar, and two confidential informants watched the 2010 All American Futurity on a computer -- presumably in Mexico, where the informants say they met Miguel Treviño.

After the win, which paid Tremor Enterprises $968,440, Miguel Treviño said "he and his associates paid approximately $10,000 to the gate keepers to hold back the horses competing against Mr Piloto," the affidavit quotes the two informants as saying.

Mr Piloto only won the 2010 All American Futurity by a nose over JLS Mr Bigtime, the 2-1 co-favorite.

Darrel Soileau, trainer of JLS Mr Bigtime, wouldn't comment Thursday on claims in the federal affidavit that the race had been fixed and that the winning horse had been doped

The running of the 2010 AQHA All American Futurity at Ruidoso Downs is archived on YouTube- contrary to Treviño Morales' boasts, the video shows no significant delay in the other horses leaving the starting gate. In fact, Mr Piloto is seemingly at a disadvantage at first as the horse veers off towards the railing closest to the crowd before regaining lost ground. The race ended in a 3-way photo finish between Mr Piloto, JLS Mr Bigtime and Dominyun.

NEVADA- The days of mob-run casinos on the Las Vegas strip may be gone, but that's not to say organized crime is no longer interested in Sin City.

Mexican cartels attempting to move product in Clark County or use southern Nevada as a staging area to ship drugs elsewhere are anxious to get a foothold in Las Vegas, according to a recent report from the Las Vegas Sun.


The vast majority of drugs entering the region still come via long-established routes through Phoenix or Southern California and are overseen by middlemen. But with greater frequency, traffickers here are ordering drugs directly from cartels in Mexico, enforcement officers have found.

“There’s no denying that these cartels are slowly inching themselves into our community,” said Lt. Laz Chavez of Metro Police’s narcotics section

The deliveries from Mexico include cocaine, heroin, marijuana and methamphetamine, typically transported by vehicle in hidden compartments.

Last year, task forces seized more than $66 million in drugs in Southern Nevada, more than double the amount seized in 2010, according to authorities.

Authorities suspect Mexican drug cartels are sending splinter groups — associates but not cartel leaders — to the Las Vegas area to, as Chavez puts it, “test the waters.”

They’re purchasing homes and own enough vehicles to operate in the region, all funded by money from the cartels, he said. Chavez said he thinks that as these associates attempt to set up shop, they’re keeping an eye on police activity — in other words, “how much they can get away with.”

There’s not one cartel running Southern Nevada, though. Authorities have come across drug traffickers with direct connection to the Sinaloa, La Familia and the Knights Templar cartels.

Besides the potentially lucrative drug market, cartels could also possibly use the casinos on the Las Vegas Strip to help launder proceeds from their drug trafficking. From a criminal's standpoint, part of the problem with money laundering and large scale black-market transactions is the largest denominated currency typically available is the US $100 bill or Mexican 1000 Peso bill (currently worth US$75 give or take). While some drug traffickers in Europe or South America have gravitated towards the €500 note, some organized crime groups in Canada have been known to transfer high-denomination casino chips between one another in order to launder money. Althugh one is usually limited to redeeming the chips at just the one establishment, some casinos issue chips worth as much as US$500 or $1000, making them easier to handle or transport than the cash equivalent.
Posted by Fenway_Nation at 10:43 PM