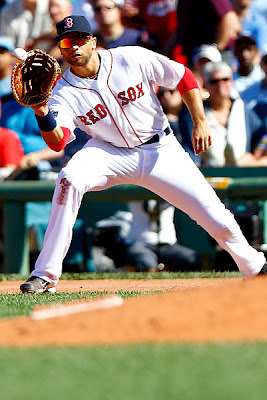 The trade- reportedly the largest in Dodgers history- has triggered hyperbolic comparisons from Boston sportswriters who claim the transaction is on the scope of sending Babe Ruth to New York [personally, I think its more along the scale of the 2004 trade that sent Nomar Garciaparra to the Cubs in exchange for Boston getting Orlando Cabrera from Montreal and Doug Mientkiewicz from Minnesota. Not quote as big money, but even more moving parts to potentially complicate the deal- NANESB!] .

Beckett was reportedly shopped around by Boston about 48 hours prior to the trade deadline last month. Although the Braves and Rangers had reportedly expressed an interest, no deal was reached by the trade deadline and if the front office still intended to move Beckett, it was assumed such a move would take place in the upcoming offseason. Just three games out of first place in the NL West and flush with cash from a new ownership group that includes NBA legend Magic Johnson, the Dodgers decided not to wait for November to try and swing a massive deal. Despite sending more than $11 million in cash to LA, the Red Sox are expected to save more than $260 million in salary after being free from Beckett, Gonzalez and Crawford's sizable contracts. The Los Angeles Times points out that the Dodgers payroll for 2013 will be $100 million more than it was on opening day this year.

A number of other Red Sox fans had pointed out that manager Bobby Valentine seemed largely unaware of the August transaction, despite its unprecedented scope. That in and of itself seems to point out that he most likely won't be back for the 2013 season. 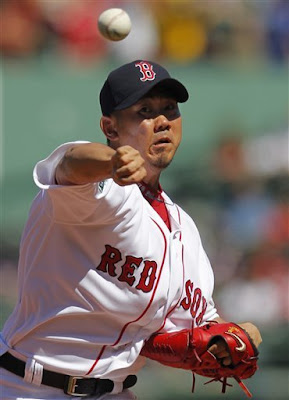 
OTHER RED SOX NEWS: With all this taking place, the Red Sox still had a 4-game series against the Kansas City Royals at Fenway to contend with over the weekend.

After taking two out of the first three home games against KC, Daisuke Matsuzaka would return to the mound for his first start since going back on the DL in early July.

Matsuzaka, who had never gone more than 6 innings this season, started off by allowing an unearned run in the top of the 1st before getting out of the inning. Jacoby Ellsbury tied the ballgame up at 1-1 with a 2-out solo homer in the bottom of the first. Cody Ross would then break the deadlock with a 2-RBI wall-ball base hit in the bottom of the 3rd- it had come close to landing in the stands, but the umpires ruled it had stayed within the park. It remained a 3-1 game until the bottom of the 6th when Cody Ross and new acquisition James Loney each had RBI base hits to make it a 5-1 game. Matsuzaka and the bullpen did not squander the run support they got, either. Daisuke went 7 complete innings allowing 5 hits and the unearned run while striking out six. With Alfredo Aceves serving a 3-game suspension, Clay Mortenson, Vincente Padilla and Andrew Bailey closed out the game for the Red Sox.

Monday's Day game was the last before the Red Sox embark on their west coast Road Trip. Things kick off in Orange County on Tuesday night when Clay Buchholz [11-4; 4.47 ERA] gets the start against the Angel's Jared Weaver [16-3; 2.74 ERA]. First pitch is at 7:05 ET Pacific Time and 10:05 ET and the game will be televised on NESN and Fox Sports West.

LOS ANGELES DODGERS- The Los Angeles Dodgers were shut out by the Colorado Rockies by a 10-0 final in Josh Beckett's debut in Dodger blue. Beckett went 5 and ⅔ innings allowing three earned runs on 7 hits and 3 walks at Coors Field before the Dodgers bullpen imploded- giving up 7 runs in the bottom of the 8th inning.

Adrain Gonzalez is presently batting .250 for LA with 4 RBIs and a homer in three games with the Dodgers.

OTHER DODGERS NEWS- Hall of Fame Broadcaster Vin Scully announced that he would be returning to the Dodgers broadcast booth for a 64th season starting in 2013.

Scully had stated that the recent trade with the Red Sox that brought Beckett, Crawford and Gonzalez to LA had revitalized the organization as well as himself and demonstrated that the new ownership group was serious about bringing another World Series to LA.

The venerable play-by-play man was in the booth for a number of baseball milestones, including Henry Aaron's 715th career home run in 1974, Don Larsen's perfect game in the 1956 World Series and a walk-off homer from a hobbled Kirk Gibson in Game 1 on the 1988 World Series.

Colon- a 15 year veteran- admitted to violating the MLB substance abuse policy and will reportedly not appeal the suspension, which would carry over into next season if he were to continue playing in the MLB.

In 24 starts with Oakland this season, Colon has a 10-9 record and 3.43 ERA. Since 2008, Colon has started for the Red Sox, A's, Yankees and White Sox. The suspension comes after another Bay Area ball player- San Francisco's Melky Cabrera- also tested positive for a substance prohibited by MLB. 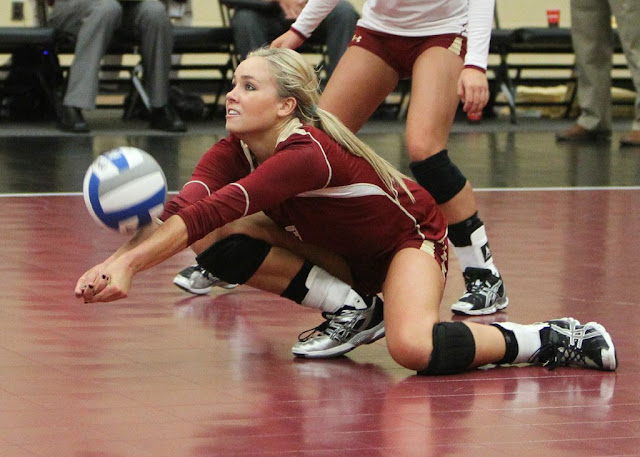 BC sophomore Courtney Castle gets in a dig during the Eagle's match against Fordham at this weekend's Boston College Invitational. BC Eagles photo via Twitter

NCAA WOMEN'S VOLLEYBALL- The NCAA's volleyball season got underway this weekend in Chestnut Hill with the 2012 Boston College Invitational.

To kick off the 2012 campaign, the Eagles played host to Texas Tech, Fordham, Siena and SUNY Binghamton on Friday and Saturday.

The lady Eagles got off to an 2-0 start on Friday when they swept the Binghamton Bearcats 3 sets to none. 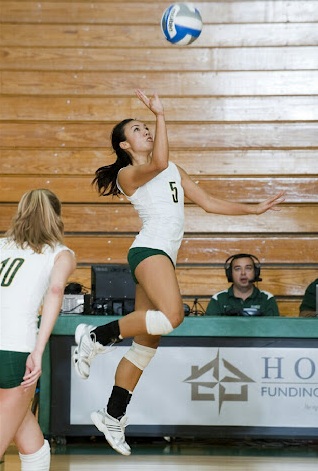 Siena Junior Taylor Akana- named the MAAC Conference's Offensive Player of the Year in 2011 and Preseason Player of the year for 2012. Siena Saints photo

The Siena Saints and captain Taylor Akana presented a little more of a challenge to BC as the Eagles dropped the opening set 25-19, but the BC would rebound and win the next three consecutive sets by totals of 25-14, 25-18 and 25-20. Katty Workman led the Eagles with 12 kills while outside hitter Courtney Castle had 11 for BC. Over on the Siena side of the net, Taylor Akana and Rachel Stoklosa led the Saints with 11 each on the losing effort.

On Saturday, the Eagles went .500 on the court, sweeping Fordham 3 sets to none, but then dropping the match against the Texas Tech Red Raiders after taking a 2-0 lead.

With a 3-1 record, the BC Volleyball team will next head out to the west coast for the USC Tournament where they'll take on the host Trojans as well as Northern Iowa and Mississippi State.

CYCLING- Seven time Tour De France winner Lance Armstrong will reportedly be stripped of his titles after announcing he would no longer fight an investigation by the United States Anti-Doping Agency.

The announcement from Armstrong means that the USADA will recommend Armstrong be banned from all International Cycling Union (UCI) sanctioned events and that he be stripped of all titles dating back to 1998. The decision was made even though Armstrong had passed hundreds of tests administered during that timeframe.
Posted by Fenway_Nation at 11:55 PM