CHINA: Passengers stranded on a train that was stuck on a partially collapsed bridge Guanghan, Sechuan were successfully evacuated shortly before at least two of the cars plunged into the river below this week. Amateur video shot inside one of the cars shows passengers making frantic calls to loved ones as the bridge starts to buckle, and later on shows another train passing in the background on a separate bridge immediately in the background as the passenger cars are plunging into the river. Rescuers and railway officials were able to get the passengers out of the cars minutes before the first passenger car toppled into the floodwater-swollen river and came to rest at the abutments of nearby bridge that was still under construction.

HOLLAND: An out of control maintenance-of-way train crashed through a barrier and tore its way through 300 feet of parking lot and slicing a watersports shop in two before coming to a stop in the town square in Stavoren, Holland on July 26.

Dutch Daily De Telegraaf reported that the official in charge of safety on the maintenance of way train was a temporary worker that spoke no Dutch. Investigators said that the firm- Spoorflex Safety First- had a history of safety infractions over the last two years and suspended the contract. 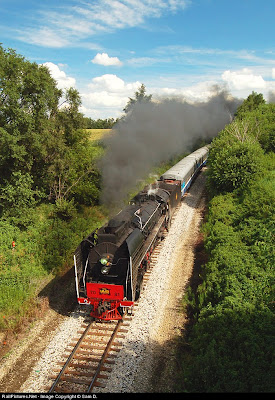 IOWA: The volunteer fire departments in Atlantic and Anita, Iowa held a fundraiser that featured Iowa Interstate's Chinese made QJ 2-10-2 #7081 powering an excursion between the two southwestern Iowa towns. The excursion ran on the western portion of Iowa Interstate's former Chicago, Rock Island & Pacific between Blue Island, IL (Chicagoland) and Omaha, NE (across the river from Omaha, NE) line.

Two trips were initially planned, but a third was added due to increased demand.

ALASKA: The Alaska Railroad announced that Kiewit Pacific Co. has been awarded the contract to provide general contracting and construction management services for the first phase of their planned 80-mile extension from the current end of the line between Fairbanks, AK and Delta Jct.

OK....not to get all Jay Sherman here, but it looks like Tony Scott took some of the Cop Show/movie tropes and applied them to a fictional railroad and its workers....["turn in your gun and badge fluorescent safety vest and walkie talkie!!"- NANESB!] Ah well....as I mentioned earlier, the movie is very loosely based on a real life runaway train incident in Ohio back in May 2001.