Sports Chowdah With A Chance of Sprinkles- Mariners On the Rocks @ Fenway, Bittersweet Lou; Trouble in Strasburg? Vin-Comprable 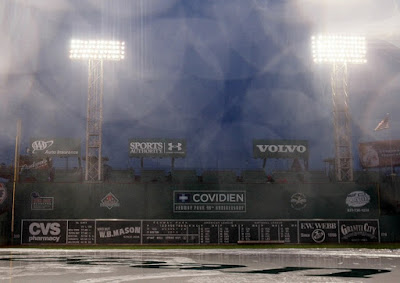 RED SOX: Well, after winning three out of the last four games at Fenway, mother nature decided to put a damper on Boston's modest winning streak Tuesday night. So tonight's game will be made up as part of a day/night doubleheader on Wednesday. Josh Beckett (3-3; 6.67 ERA) gets the start against David Pauley (2-4; 3.70 ERA) in the day game while Jon Lester (13-8; 3.26 ERA) goes up against Felix Hernandez (9-10; 2.51 ERA) in the nightcap.
Clay Buchholz got the W in Sunday's weekend sereis finale against the Blue Jays, pitching 6 shutout innings, striking out seven and allowing five base hits and three walks. Adrian Beltre started off the scoring with an RBI double to left in the bottom of the 5th and came home when Bill Hall homered. Victor Martinez and Bib Papi followed that up with RBI singles of their own in the bottom of the 8th to make it a 5-0 game. Papelbon had Sunday afternoon off and Felix Dubront came on for two innings worth of work to close out the game.
On Monday night, Seattle got off to the early 1-0 lead in the third when Ryan Langerhans came home on Jed Lowrie's throwing error. In the bottom of the 5th, Marco Scutaro would get a 2-RBI single off of Mariners starter Doug Fister while JD Drew would drive in another run to make it 3-1. The Mariners got both runs back in the top of the 6th with Casey Kotchman's 2-RBI single off of Lackey to tie things up at 3-3. However, the Sox would reagin the lead with another Scutaro 2-RBI single followed by a Victor Martinez sac-fly to make it a 6-3 game.
Lackey worked eight whole innings, giving up 6 hits, 3 runs, two walks and striking out 10. Since it was still a save situation, Papelbon came on to work the top of the 9th, giving up a leadoff single to Adam Moore before getting the next three batters out for the 6-3 Red Sox win.
OTHER SOX NEWS: Boston's highly anticipated reunion with Johnny Damon will have to wait, as the Tigers outfielder declined to accept being picked up by the Red Sox after being placed on waivers by Detroit. Damon had indicated that he was leaning towards staying with the Tigers from the beginning and had a no-trade clause that he declined to waive. In his first year in Detroit, Damon has been batting .272 with 7HR and 41 RBIs in 111 games so far.
ELSEWHERE: Cubs manager Lou Piniella stepped down Sunday afternoon after a 16-5 loss to the Atlanta Braves. Last month, Piniella indicated that he would retire at the end of the season, citing family concerns. The deteriorating health of his 90 year old mother is believed to have played a role in hastening his retirement.
Also this weekend, Dodgers broadcaster Vin Scully announced that he was returning to the booth for a 62nd season. The team announced that Scully would be calling the play by play for the Dodgers home games as well as road games against NL West opponents- similar to an arrangement that's already been in place for the last few seasons.

“The love of the game still produces goose bumps. That might be my thermometer,” he said. “Every time there’s a good play, the other night when the kid at second base threw the ball to first behind his back, I had goose bumps like it was the first big league game I’d ever seen.

“I went home thinking, `Holy mackerel, it’s still deep inside of me, this love for the game.’ I’m so blessed.”

Washington Nationals starter Stephen Strasburg went back on the 15-day DL Tuesday after leaving the 5th inning of Saturday's game against the Phillies with what's believed to be a strained tendon in his right forearm. The rookie fireballer is slated to undergo further testing on Thursday.

NFL: Brett Favre is back with the Minnesota Vikings. Favre lasted exactly all of 4 plays, getting a 13 yard pass off to Adrian Peterson in Minnesota's 10-15 loss to the San Francisco 49ers.
Posted by Fenway_Nation at 10:39 PM