You know, I was content to let this slide up until I heard a 'serious' network correspondent giving an update over the radio from Rhinebeck, NY like some breathless E! red-carpet reporter before some insipid awards show on Saturday night.

While Chelsea Clinton's wedding to Marc Mevinsky could be considered newsworthy, the hype building up to it seemed to smack of a desperate attempt to try and present it as some sort of a 'Royal Wedding' for the USA.

More to the point, early estimates had put the cost of the wedding at roughly $2 million while others have the price tag as high as $5 million. 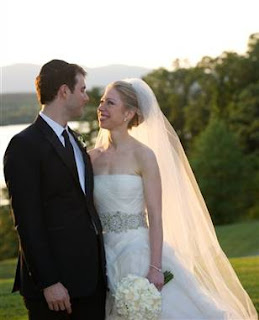 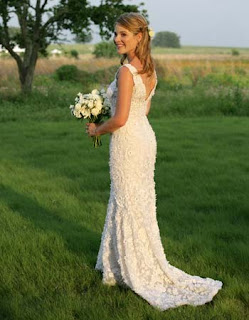 Then-first daughter Jenna Bush's May 2008 wedding ran a price tag of roughly $100,000- Granted the costs were brought down considerably by having the ceremony at Bush's Crawford, TX ranch.

Meanwhile, the Rhinbeck, NY estate- the Astor Court- abutting the Hudson River where the wedding took place was rented out at $500,000, multiple catering companies were hired with an estimated tab of $750,000, another $250,000 in floral arrangements were used along with $100,000 worth of lighting and $100,000 between the videographers, entertainment and photographers hired. Another estimated $475,000 went towards rehearsals, planning and embroidered invitations and at least $80,000 towards security and other miscellaneous expense according to ABC News.

This flurry of activity leading up to the wedding most likely provided some short term economic benefit to the Dutchess County town of Rhinebeck- ironically most of it coming from people who routinely sneer at the concept of 'trickle down economics'- in an otherwise down economy.

Of course, my pointing this out will somehow be interpreted as me not wishing the bride and groom well or still harboring a grudge against Bill Clinton.

However, doing so would be an intellectually dishonest and lazy way of deflecting attention away from the fact that the mother of the bride (and our current Secretary of State) had said not even a month ago in Kiev:

One of the problems in societies around the world today is that too much of the productivity of the economies are going to too few. Too few people, the political and economic elite, are realizing the vast majority of benefits from economic activity

I don't begrudge the Clintons for wanting their only daughter's wedding day to be something special. But you have to wonder what sort of disconnect is involved when the mother and father of the bride used class warfare and class envy as their bread and butter for the last 30 years, portraying themselves as the working class people's only champions in Washington DC and held a bash this extravagant while the national unemployment rate is hovering around 10%.

And after looking at the price tag of this weekend's wedding, I still have to wonder who Hillary had in mind when she was lamenting over the undue influence and wealth of the political and economic elite.
Posted by Fenway_Nation at 12:59 PM