Well damn- this issue had been brewing for a little while but you had to figure it was only a matter of time before the Vacationer-in-Chief stepped in it in some way, shape or form.

President Obama expressed support for a proposed Islamic cultural center and mosque that would be adjacent to Ground Zero during a White House dinner with guests marking the start of Ramadan on Friday. While addressing guests and the White House press pool, the President said:

"As a citizen, and as president, I believe that Muslims have the same right to practice their religion as everyone else in this country, That includes the right to build a place of worship and a community center on private property in lower Manhattan, in accordance with local laws and ordinances. This is America, and our commitment to religious freedom must be unshakable"

Wow- so glad that all those problems regarding the US/Mexican border, the Deepwater Horizon spill, Afghanistan and the economy are now solved so that the President can give us vapid, condescending civics lessons with strawmen galore.

Naturally, many survivors and loved ones of those murdered nearly 9 years ago weren't too happy with what President Obama had to say.

Of course, to be fair, Obama was only following Mayor McCheese Bloomberg's lead. Bloomberg- the Mayor who won in a landslide over C Montgomery Burns- basically held a weepy press conference with the Statue of Liberty as a backdrop earlier this month saying that if the 13-story touchdown dance kitty corner to Ground Zero Park51 Cultural Center/mosque wasn't built (adjacent to the site of Al Qaeda's most high-profile victory) then it would be a victory for Al Qaeda.

Yes, REALLY. Heck, Bloomberg apparently doesn't even care where the estimated US$100 million for the ambitious reconstruction project is coming from.

Personally, I'm against the idea of a mosque or Islamic cultural center setting up shop in the former Burlington Coat Factory building- a structure that was close enough to the World Trade Center site that the roof was damaged by falling debris. Columnist Charles Krauthammer outlined his opposition far more eloquently than I could mine, but I'll give it a shot anyway.

Although Imam Rauf and the Park51/Cordoba founders say the project is supposed to foster outreach and interfaith dialogue, figuratively poking the survivors and loved ones of those who were slain on 9/11 in the eye with a sharp stick isn't the best way to start off such an endeavor. And the more they persist on this particular venue, the more anybody with more than two functioning brain cells have to question their stated intentions. Hell, Governor Paterson sought a compromise where the state would aid the Park51/Cordoba project in finding a location elsewhere and that was rejected outright by the developers.

Ironically, it's the breathless, condescending whining and shrill cries of 'Racism!' from the Park51 cultural center/mosque's non-Muslim supporters that really convinced me. It seems these days, frantic cries of racism have become the last refuge of scoundrels...whether it comes to healthcare 'reform', the US/Mexican border, the Tea Party or this mosque. There's also the strawman that opponents of the Park51 cultural center/mosque are unfairly painting all muslims as potential terrorists, which is pretty rich considering how the left and their allies in the media and Democrat Party broadbrushed the Tea Party as exactly that- including Mayor McCheese Bloomberg himself.

I'm well aware that Imam Rauf and the Park51/Cordoba developers have the right to build the mosque where it is- but that doesn't mean they should. I'd be a little bit surprised if somebody who objected to the mosque didn't already try appealing to Rauf's better nature and explaining how this project would come off as gloating to the survivors and families of those slain on 9/11 and hinder moderate muslims who really were interested in interfaith dialogue or outreach. Rauf- who has a difficult time describing Hamas as a terrorist organization- seems hell-bent on going full speed ahead with the project.

So apparently my questions along the lines of 'In what fucking universe would this mosque or cultural center even remotely resemble a good idea?' becomes "Grrrrr!!! I hate the Constitution, Bill of Rights and brown people!! FENWAY SMASH PUNY HUMANS!!"

And as it turns out, the Park51/Cordoba developers may only own half the land on that parcel, with ConEd owning the other half. So when all is said and done, this could turn out to be sound and fury signifying nothing.

However, the opposition to Park51/Cordoba is hardly monolithic. A number of moderate muslims have come out against the idea, including the daughter of Iranian immigrants whose mother was killed in the attacks. The New York based Anti Defamation League- hardly a bastion of rightwing nutcases- has also opposed construction of a mosque at the current site.

But what is cause for alarm is the ease with which the Park51/Cordoba development has been breezing through the mountains of red tape in New York City. All while they're still finding human remains at Ground Zero. 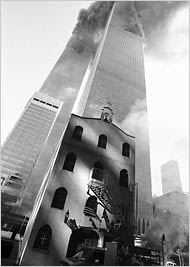 St. Nicholas Greek Orthodox Church (above), located beneath the Twin Towers, was destroyed in the attacks and is still waiting for funds and official approval to rebuild nearly nine years later. That's quite a contrast, isn't it?

While some of the more fringe critics of President Obama have claimed his support (however tepid) for the Park 51 cultural center/mosque is some sort of proof that he's a clandestine Muslim, I think his blithe, flippant disdain for the families who had loved ones murdered on 9/11 proves that he was in fact paying attention those 20 years as a parishioner at 'Reverend' Wright's Trinity United Church of Chirst.

Even though President Obama tried walking back his comments from the Friday night dinner later that weekend, there may well be immediate political consequences to this. Fresh from dodging questions about Charlie Rangel, Empire State Dems seem remarkably mum on the President's opaque statements regarding the Park51/Cordoba mosque.

GOP candidates for the Senate, House of Representatives and Governor- almost all of them who are opposed to the mosque/cultural center as well- have seemingly been given yet another gift-wrapped issue with which the Administration (and by extension, the Democrat supermajority in the House and Senate) is at odds with much of the public.

The difference being that this time around, it could cost the Democrats dearly in what's normally a solidly dark-blue state.
Posted by Fenway_Nation at 10:12 PM