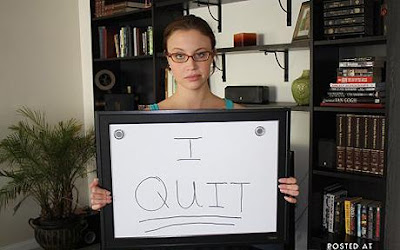 UPDATE 8/12: I have been informed by reliable sources that the whiteboard story was actually a crafty publicity stunt by TheChive.com [the thought had crossed my mind that this might be a hoax, but that was followed up by the question of 'to what end?' -NANESB!]. As for the Jet Blue flight attendant, despite achieving almost instant folk-hero status, some of the passengers have come forward to let the world know that he's kind of a dick.


Even with the economy and unemployment the way it is right now, some people have had enough and decided to take their chances out there with unemployment and marked their last day with a decidedly dramatic flourish (that doesn't involve a killing spree- just sayin').


The first such instance is a brokerage assistant only known as 'Jenny', who announced her resignation via e-mail and attached a series of photos of her holding up a whiteboard. The Chive posted 34 pictures of her, and the message on the whiteboard in the first few frames says that she'll miss everybody and thanks them for all that she's learned after 2 years there. With the noticeable exception of somebody named Spencer, who's apparently some sort of supervisor.


In subsequent photos, 'Jenny' reveals that she's listened in on phone conversations where Spencer referred to her as HOPA (Hot Piece of Ass- one picture seems makes light of the inconsistent acronym) and points out that while Spenser was monitoring other employees online usage, she used the same software to find out that he spent nearly 20 hours a week playing Farmville on a company computer.


Interestingly, the last 3 images of 'Jenny' show her dressed much more casually while still holding the whiteboard and reassuring readers "Something tells me I'll be just fine". No word yet on whether this was an actual resignation or a cleverly staged publicitiy stunt done on the cheap.


Jet Blue [NASDAQ: JBLU] flight attendant Steve Slater decided that Monday was his last day at work. Slater was apparently cursed at and hit on the head by a passenger taking his luggage out of the overhead bin as the aircraft was pulling up to the gate at JFK Airport as it arrived from Pittsburgh. Slater had told the passenger he couldn't retrieve his bags yet, and after getting hit on the head, Slater let loose a profanity-laden tirade directed at the passenger over the PA system before announcing "I've had it", grabbing some beer from the beverage cart and letting himself off the plane through the back using the emergency slide.


Slater was eventually arrested by the NYPD at his Queens home and charged with tresspass, criminal mischef and reckless endangerment. The low-altitude DB Cooper was out on $2500 bail as of Tuesday.