RED SOX: The current road trip seemed to be getting off to such a promising start, first by splitting a 4-game series with the Yankees in the Bronx and the taking the first two from Toronto in the Rogers Centre. However, the Jays managed to avoid the sweep with 4-run bottom of the 9th on Thursday- with three of those runs coming off of Papelbon- for the 6-5 win over Boston.
On Firday the 13th, they were in Arlington, TX to take on the AL West leading Texas Rangers for the first of a 3-game weekend series. Despite an offensive explosion early from Boston in the form of a 7-run 4th inning, starter Josh Beckett got as far as 5 complete innings before the bullpen squandered the 8-6 lead to the Ranger's potent offense. Although JD Drew added a solo homer to the tally in the 7th, that wasn't enough insurance as Scott Atchison gave up a sac-fly and RBI double in the 7th to make it a one-run game and Ranger's DH Vlad Guerrero ran out an infield single that plated Josh Hamilton to make it a 9-9 game in the 8th and eventually force extra innings. DelCarmen and Papelbon would hold the Rangers scoreless for the 9th and 10th innings, but Nelson Cruz would belt a solo homer off of Tim Wakefield as the first batter in the bottom of the 11th for the Ranger's walk-off win.
So if last night was home run derby, and it was- Lowrie, Big Papi and Beltre had solo shots while JD Drew had two to his credit and Mitch Moreland, Josh Hamilton and Michael Young all went deep for Texas...not to mention Cruz's walk-off- then tonight's game can be described without any snark or hyperbole as a pitcher's duel and Lester adeptly filling in the role as Boston's 'stopper'. 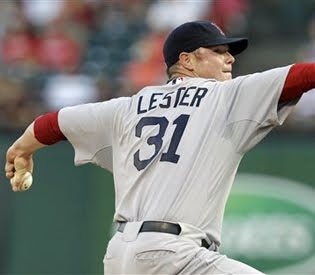 With the mercury pushing past 102 at the start time and bullpen needing some rest after the last two games, Lester didn't disappoint. Of course, Rangers starter Colby Lewis didn't give up a run until the top of the 5th inning on a JD Drew RBI single. Throughout the rest of the game, the Sox 1-0 advantage seemed insurmountable, with Lester going 8 whole shutout innings and throwing 109 pitches, allowing five hits (including a 1-out Nelson Cruz triple that he managed to work around in the 7th). However, given the inconsistent nature of the Sox bullpen and the explosive nature of the Ranger's bats (presently batting a team average of .275- tied with 2nd best in the AL), the desire for some insurance runs was perfectly understandable.

And that wish came true in the top of the 9th when 1B Mike Lowell worked a 9-pitch at bat into a leadoff double (which the Rangers announcers were convinced could've been a triple if it weren't for Lowell's deteriorating hip) off of Darren O'Day before reaching third on a Ryan Kalish single. Bill Hall then singled to bring home Lowell, snapping O'Day's club-record 29 scoreless innings pitched. Scutaro then hit a fly ball to center off of reliever Matt Harrison that probably was deep enough to bring in Lowrie from 3rd, except Texas OF Julio Borbon couldn't quite handle it on the fly- so instead of one home, two away and one out, it was one in, bases loaded with nobody out. Harrison would get out of the inning by getting JD Drew to ground into a double-play, intentionally walk Victor Martinez and then get Big Papi to ground out and end the inning.

With Bard and Papelbon being rested (not to mention their less-than-stellar outings Thursday and Friday), Scott Atchison was sent in to close it out. He got Micheal Young to line out to start off the inning, but Josh Hamilton belted a solo homer to deep center and Vlad Guerrero reached on yet another headfirst slide into first base.

Not satisfied with the way things were developing, Francona sent in Felix DuBront to relieve Atchison. Guerrero helped DuBront out considerably by attempting an ill-advised steal of 2nd base where Victor Martinez threw him out from home. Pinch-hitter Mitch Moreland would strike out looking to end the ballgame and give DuBront his first Major League save.

OTHER SOX NEWS: 'Hey- where's Jacoby Ellsbury?' you might be asking. The answer is 'Back on the 15-Day DL'....this comes after he collided with Texas pitcher Tommy Hunter while running to 1st during Friday night's game (Friday the 13th, no less). Ellsbury was back in Boston undergoing MRI and CT scans on Saturday and was diagnosed with bruising on the left side of his ribcage. Friday night's game was only his 9th of the season after two seperate stints on the DL stemming from an April collision with Adrian Beltre in Kansas City.

In other DL news, Dustin Pedroia began the first of what was expected to be a 2-game rehab stint in AAA Pawtucket on Saturday. Pedroia went 1 for 3 with a single and a walk in Pawtucket's 6-4 win over the Buffalo Bisons on Saturday night.

Carlos Delgado is also down in Pawtucket, batting .250 with three hits in 12 official at-bats over the last 4 games.

Thursday's preseason game against the defending Super Bowl New Orleans Saints didn't count, so naturally it had a much different outcome than that one-sided beatdown on Monday Night Football last season.

Although he's reportedly healing nicely, WR Wes Welker sat this one out, which was probably just as well, seeing that New Orleans RB Lynelle Hamilton tore an ACL during practice on Wednesday and P Thomas Morstead was knocked out of the game on the first play, tackling Pat's WR Julian Edelman after a 40-yard kickoff return. Pat's RB Laurence Maroney had 30 yards and 2 TD's on the night.

Pats win this one 27-24 at Gilette on the boot of Gostkowski with 53 seconds left in regulation and will face the Atlanta Falcons at the Georgia Dome next on Thursday. The regular season kicks off with a home game in Foxboro against the Cincinnati Bengals on Sunday, September 12.

[Don't get me wrong- I'm glad football season is right around the corner, but I can't get that worked up about the games until they start counting in the standings- NANESB!]
Posted by Fenway_Nation at 11:23 PM