MLB: After finishing off a sweep of the Mariners in Seattle, the Red Sox travelled back to Boston for a weekend homestand against the Toronto Blue Jays. After dropping the first two games of the weekend series, leave it to Jon Lester to stop the bleeding. The starter went 7 shutout innings giving up four hits and striking out four while getting run support from homers by Victor Martinez and JD Drew as well as an RBI single from call-up Yamacio Navarro. Scott Atcheson and Robert Coello closed out the game and preserved the shutout for Boston's 6-0 win on Sunday afternoon.

The homestand continues Monday against Baltimore, with Daisuke Matsuzaka (9-5; 4.82 ERA)getting the start against Brian Matusz (8-12; 4.68 ERA).

NCAA FOOTBALL: Holy crap! I managed to tune in late to the Notre Dame/Michigan State game. Normally you'd think overtime games would be exciting, but the end of regulation and the 1st Irish possession of overtime were almost coma-inducing. The first three downs on the Spartan's possession were actually kinda painful to watch, culminating in a loss of 8 yards after Michigan State QB Kirk Cousins was sacked to bring up what appeared for all the world to be a lengthy field goal attempt on 4th and 13 with an inexperienced kicker.

Apparently Michigan State designates their trick plays with movie titles, and what you just saw was a successful execution of 'Little Giants'. But there would be more- and not just the sour grapes from Irish fans whining about the game clock. Michigan State head coach Mark Dantonio was hospitalized with a mild heart attack on Sunday morning. The 54 year old coach underwent surgery to put a stent in one of the blocked blood vessels leading to his heart. It appears that Dantonio will be fine, but he'll be out indefinitely as he's recovering. 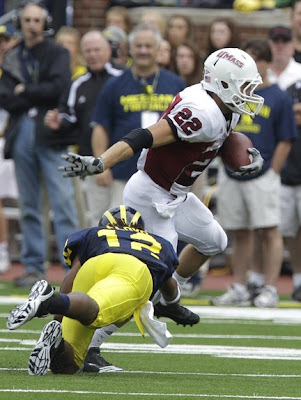 MEANWHILE, IN ANN ARBOR: Boston College has the weekend off, but another Massachusetts college football team caught the nation's attention- at least until Dantonio's 'Little Giants' play. Like the Spartans/Fighting Irish game in Lansing, the action took place in the Great Lakes state when the FCS UMass Minutemen of the Colonial Athletic Association paid a visit to Michigan's Big House in Ann Arbor. The Minutemen were actually leading 17-7 for awhile in the 2nd quarter, although Michigan would take a 21-17 lead at the half. Michigan was actually starting to pull away late in the 3rd to make it a 35-17 game, but UMass came charging back in the 4th to make it 42-30 when the Minutemen held the Wolverines to a 3 and out with just over 5 minutes left in the 4th before successfully blocking the punt and recovering on the Michigan 25. Using the short field, UMass got the touchdown on a Kyle Havens pass to TE Andrew Krevis to make it a 37-42 game with just over two minutes left. But before anybody could say Appalachian State, Michigan was able to successfully bleed the clock after getting a first down on their ensuing possession. I know that talk about 'moral victories' is pretty hackneyed and cliched, but overall I'd say the Minutemen acquitted themselves quite well on Saturday. UMass QB Kyle Havens was 22 for 29 passing with 222 yards, two TDs passing, one rushing TD and and interception while Michigan's Denard Robinson was 10 of 14 with 241 yards passing, 104 yards rushing with an interception as well as two TDs through the air and one rushing TD. Pretty safe to say that the other Big 10 teams will be watching the film from this one pretty closely. Michigan is 3-0 having beaten UMass, Notre Dame and Uconn while UMass is off to a 2-1 start, good enough for the current lead in the Colonial Conference and a #15 ranking from the FCS Coaches Poll. MEANWHILE, IN THE BIG EAST: UConn- perhaps somewhat surprisingly- fell to the Mid America Conference's newest member, Temple, by a score of 30-16 on Saturday. UConn will host the Buffalo Bisons this upcoming Saturday at East Hartford NFL: Well, that sure sucked. After Generating almost zero offense in last week's Monday night game against Baltimore, the Jets offense seemed to hit their stride against the visiting Patriots at the new and reportedly improved Meadowlands Sunday afternoon. New England headed into the locker room at the half with a 14-10 lead and were shut out for the entire second half (that one-handed grab by Moss for the TD was awesome, but didn't garner any style points). The Jets were aided considerably by two Brady picks (OK- one of them was kinda flukey) and some costly penalties (39 yards against the Pats D on one Jets posession in the 4th) in their 28-14 win, the Jets first of the season.
Both New York and New England are at 1-1 while Miami beat Minnesota at the Metrodome today to get them off to a 2-0 start.
Posted by Fenway_Nation at 11:47 PM