CHIHUAHUA: Twenty five people were slain in the border town of Ciudad Juarez on Thursday when attackers stormed four homes in three hours. The attackers killed men thought to be working with the cartels as well as witnesses.

"You are killing our sons. You already did, and now we are going to kill your families," one sign read.

State Prosecutors in Chihuahua say this is the bloodiest single day in Juarez in at least two years. 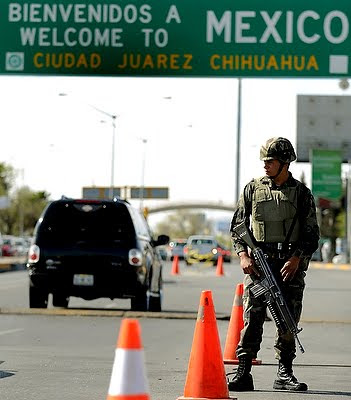 Also in Juarez, local and federal police deactivated a car bomb in the parking lot of a day-care center over the weekend after responding to a tip concerning a dead body in one of the cars. The dead body was found inside a Ford Escape at the scene, but Federal police also found explosives in a blue Kia at the same parking lot. The unidentified victim in the Ford was apparently shot in the face with a rifle.

TAMAULIPAS: Authorities in the border city of Reynosa are investigating a mass jailbreak earlier in the week in which 85 inmates scaled a wall in the prison early Friday morning. Two prison guards were also missing, leading investigators to believe that the escapees had help from the inside. Other guards and employees are being investigated by federal officials on charges of corruption and negligence.

Earlier in the year, Federal investigators chraged seven guards at the same prison for aiding and abetting suspected cartel gunmen during an April 2010 jailbreak attempt which gunmen on the outside exchanged gunfire with guards.

It was also learned over the sumertime that officials at a state prison in Durango freed inmates and provided them with weapons and vehicles to carry out killings before returning to their cells.

PUEBLA: Mexican Marines have captured a key figure in the fractured Beltran-Leyva cartel in Puebla. Sergio 'El Grande' Villareal was captured without a fight and paraded before the media over the weekend. This is the second top figure n the Beltran Leyva cartel that Mexican officials have captured in the last few weeks, with American-born Edgar 'La Barbie' Valdez Villareal being detained by police outside of Mexico City at the end of August. There were conflicting reports of how 'La Barbie' was taken into custody, with Federal police claiming they lured Edgar out to a remote location through a phone call from an arrested associate. However, documents obtained by the Associated Press indicate that La Barbie's three vehicle convoy had raised the suspicions of local police on a highway west of Mexico City. The report seems to indicate the local police were initially unaware of who they had in custody.

TEXAS: The Washington Post is reporting that a former US Customs agent known as 'La Estrella' (the star) to smugglers was sentenced to 20 years of Federal prison on smuggling and corruption charges at the end of August. According to the affidavit, Martha Garnica conspired to smuggle illegal aliens and more than 100kg of marijuana and recruited other Customs officers to allow drug shipments through one of the El Paso border crossings.