Today's Train of Thought, September 16 2010- Hope and Change of Scenery 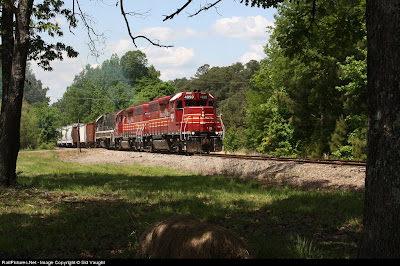 Since it's 1999 takeover of shortline operator RailTex, Rail America hasn't been very shy about mixing and matching motive power between several of their properties. Often, this leads to curious sights like Florida East Coast power on the New England Central in Western Massachusetts and Vermont or Kyle railroad power imported from Kansas on Central California's San Joaquin Valley Railroad.

In 2002, Rail America took over the then-independent Kiamichi Railroad, which had operated some 230 miles of former St Louis-San Francisco (Frisco) track between Hope, AR and Madill, OK, with a north-south branchline running between Paris, TX and Antlers, OK meeting with the main east-west route at Hugo, OK. In 1987, the Burlington Northern decided the trackage through southwestern Arkansas, Northeastern Texas and southeastern Oklahoma that they obtained in their acquisition of the Frisco was redundant and the Kiamichi Railroad was born.

About a decade prior, the Indiana & Ohio Railway got off to its modest start as tourist train and shortline freight hauler in Western Ohio. In 1991, after having already acquired some former Penn Central branches, the ambitious shortline expanded considerably when it acquired the former Detroit, Toledo and Ironton line between Washington Courthouse, OH and suburban Detroit. By the time Rail America acquired the I&O in 2000, it was operating nearly 570 miles of track between Cincinnati and Detroit as well as former Conrail and CSX branches in Ohio and southern Indiana.

Since the acquisition by Rail America, some of the I&O units have made their way as far west as Texas, while the I&O continued borrowing rent-a-wrecks and some SD70Ms from the New York, Susquehanna & Western to augment their own fleet. As for the Kiamichi, there hardly any locomotives from their 1987 start-up remaining on the property, simply engines from other Rail America properties re-lettered for Kiamichi.

On a sunny April 2010 morning, railpictures.net contributor Sid Vaught caught Indiana & Ohio GP40 #4050 and a sibling I&O GP40-2 still in their catchy pre Rail America paint scheme crossing Peacock Drive in Ashdown, AR on their way east to the Union Pacific interchange at Hope. The trailing unit is the only one lettered for the 'hometown' Kiamichi this day.
Posted by Fenway_Nation at 1:33 AM