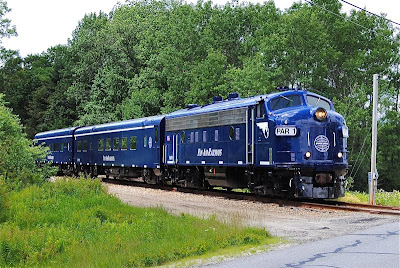 The FP9s were released from the Waterville, ME shops in late June and have been assigned to the Pan Am's business car specials, which had been previously handled by available freight locomotives.

The GP35 and Gp38 acquired by Conway Scenic were equipped with dynamic brakes, something the FP9's lacked, while Pan Am is simply following the example of other railroads like Norfolk Southern, Canadian Pacific or Kansas City Southern and having a pair of classic streamlined diesels available to haul office car specials.

ELSEWHERE ALONG THE PAN AM: In early July, Pan Am Railways ran a pair of light engines from Ayer to the junction of the dormant Revere Branch on the MBTA line while crews began clearing brush and overgrowth along the line. This has led to speculation that the Pan Am is looking to reopen the neglected B&M line in order to bring unit ethanol trains to the tank farms along Route 1A past Logan Airport.

PROVIDENCE & WORCESTER: The P&W has reportedly sold off GP40-2's #3001, 3002 and 3003 to the Luzerne & Susquehanna Railway in North-Eastern Pennsylvania. At the end of September, the EMDs were moved to the Pan Am interchange in Gardner, MA still in P&W paint, but with all Providence & Worcester markings removed and L&S markings stenciled in instead.

And while the BNSF was divesting themselves of some former Santa Fe C40-8Ws, Providence & Worcester decided to buy up a trio of their four-axle counterparts, with former BNSF B40-8Ws #561, 562 and #582 arriving on the property by mid-September as the GP40s were getting ready to leave the property.

DOWNEAST SCENIC: A portion of the 127 mile Calais Branch has experienced a revival with the startup of the Downeast Scenic Railraod between Washington Jct and Ellsworth, ME. So far, four miles of the line are being used with volunteers working to clear the line for future excursions to Green Lake, ME. Power for the line includes a former Belfast & Moosehead Lake GE 70-tonner and an ex-Portland Terminal Alco S4.

Two more former Belfast & Moosehead Lake 70-tonners are being maintained by the Brooks Preservation society on ex B&ML trackage in Brooks, ME.

The Calais Branch ran through Eastern Maine to the border town of Calais until Guilford decided to abandon the branch in 1985 and serve what remaining customers there were in the area by using trackage rights over then-Canadian Pacific (now New Brunswick Southern) line east of the interchange at Mattawamkeag, ME. 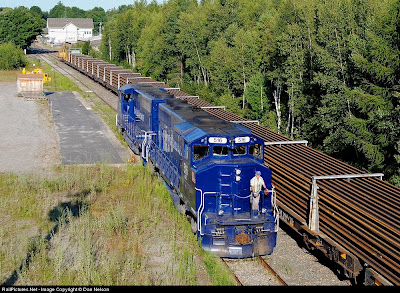 AMTRAK: Amtrak's Downeaster service between Portland, ME and Boston's North Station will see an expansion of service. A 30-mile extension of service over the former Maine Central line between Portland and Brunswick, ME got underway in the beginning of August and is expected to be completed by the Fall of 2012. Once at Brunswick, the Downeaster will connect to passenger service between Brunswick and Rockland offered by the Maine Eastern Railroad. Improvements include new signals, passenger platforms and continuous welded rail.

Above, Pan Am GP40-2LW #516 is seen trundling past the train full of continuous welded rail it has just dropped off in Brunswick on Aug 1st. Brunswick is also where the Pan Am and Maine Eastern interchange freight. 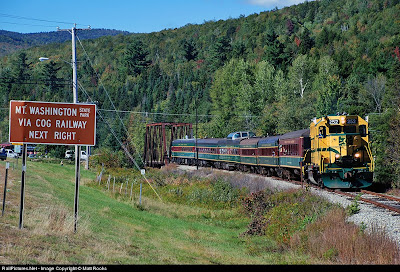 CONWAY SCENIC: As mentioned earlier, the Conway Scenic and Pan Am exchanged motive power so that Pan Am would have dedicated old school streamliners assigned to business train duties while Conway Scenic would obtain locomotives with dynamic braking for their excursions to the Crawford Notch. As it turns out, GP38 #252 was of Maine Central background and believed to have hauled the last revenue train over Crawford Notch before through service on the line was discontinued by MEC in 1983.
The Conway Scenic also sold former Portland Terminal Alco S4 1055 to the Downeast Scenic in Maine back in late May.

Posted by Fenway_Nation at 9:25 PM