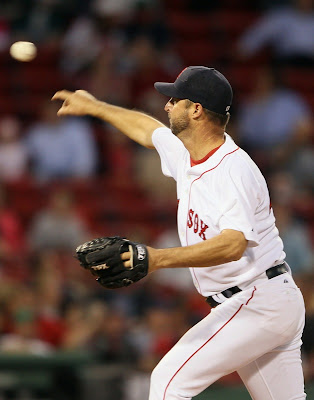 MLB: Well scheisse....I've been a bad little blogger, trying in vain to score some easy cash playing the ponies whilst neglecting my blog. Then again, out of the last 6 games the Red Sox played, the only one I get to watch was Sunday's sucktastic snatching of defeat from the jaws of victory against the White Sox courtesy of Papelbon where the White Sox completed their sweep of the Red Sox.

The bad news is that absolutely NONE of the games in the subsequent homestand against Tampa Bay were close. The good news is that two of them went Boston's way, with Jon Lester going six innings while giving up four hits, two earned runs, three walks and striking out ten. Big Papi and Beltre homered and Ryan Kalish hit a grand slam off of Andy Sonnanstine in Monday's 12-5 win over Tampa.

Tuesday night was Boston's turn to get roughed up, with Daisuke Matsuzaka lasting all of four and 2/3rds innings while giving up eight earned runs in Tampa's 14-5 win over Boston.

Wednesday night's rubber game looked like it was going to be more of the same after Wakefield gave up an RBI sac-fly to Evan Longoria in the 1st, followed by a 3-run homer from BJ Upton in the 2nd. The Sox got on the board with a 2 run homer off the bat of Adrian Beltre before tying the game in the bottom of the 3rd with solo homers from Marcos Scutaro and Big Papi. Tampa briefly re-took the lead with an RBI double from Jason Batlett in the 4th, but the Red Sox re-took the lead in the bottom of the 5th thanks to Victor Martinez solo homer, followed by Ryan Kalish's RBI double and THEN scoring on an Evan Longoria throwing error with 2 away.

Boston would go on to tack on three more runs, including another homer by Scutaro to win by the final of 11-5 (this one being a little closer than it looked, given how quickly Tampa got out of the gate).

Vintage knuckleballer Tim Wakefield got 5 innings of work in, giving up 4 earned runs (plus one unearned) on six hits while walking two and striking out 4. With an abundance of run support, Wake's outing was good enough for the win, making the 44 year old knuckleballer the oldest Red Sox ever pitcher to get a win. Hall of Famer Dennis Eckersley was 43 when he got his last win in a Red Sox uniform.

Thursday's a pretty light day in general in the American league, and the Red Sox will be travelling for another West Coast road trip that gets underway with a Friday night start against the Oakland A's with Clay Buchholz (15-6; 2.25 ERA) scheduled to start against Trevor Cahill (15-6; 2.72 ERA) at 10PM Eastern time, 7PM Pacific.

OTHER RED SOX NEWS: Jason Varitek made an appearence with the AAA PawSox for their final two games of the International League season at McCoy stadium, going 2-5, batting .400 and driving in a run in two games against the Syracuse Chiefs before being activiated by Boston on Monday night. The captain made an appearence in Tuesday night's loss, going 0-2 with two groundouts, but sat out Wednesday's game against Tampa with the knuckleballer starting.

NCAA FOOTBALL: The BC Eagles are off to a 1-0 start after their 38-20 win over Weber State at Chestnut Hill on Saturday. Eagles QB David Shinskie was 10-20 with 185 yards, 2 touchdowns and two interceptions and LB Mark Herzlich returned to the lineup after missing the 2009 season to undergo treatment for bone cancer.

This was pretty much a first week 'gimmee' where the hapless Division 1AA/FCS team gets slapped around by their 1A/FBS counterpart. Next week, the BC Eagles will host Kent State for a 3:30 PM ET kickoff.

The UConn Huskies had a much rougher start to their season at the Big House in Ann Arbor, MI. The Husky D couldn't contain an occasionally shoeless Denard Robinson, who was 19-22 with 186 yards and a touchdown passing while rushing for another 197 yards and a TD. Michigan wins their home opener against Connecticut, 30-10.

The Huskies will next host the Texas Southern Tigers at Storrs at noon Saturday.

ELSEWHERE IN NCAAF: Pretty good game Monday night between Virginia Tech and Boise State. The game took place at Fed Ex Field in Landover, MD- home of the Washington Redskins- and had the uncanny ability to time some big plays in the second half when I went out to flip some burgers or brats on the grill on Labor Day. The visiting Broncos held off a late drive by the Hokies to win 33-30.
Posted by Fenway_Nation at 9:50 PM