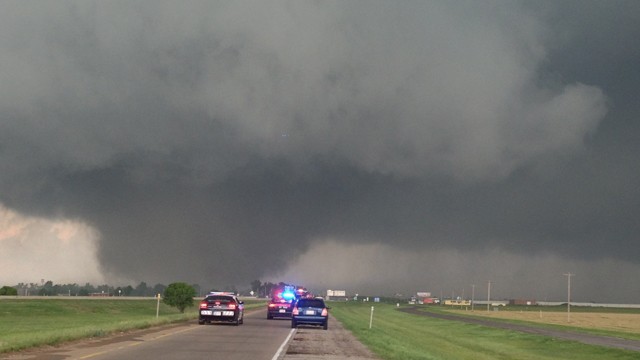 Rescuers in the Sooner State were searching for survivors into Tuesday morning, less than a day after a massive tornado ripped through  suburban Oklahoma City, reportedly striking two schools and a hospital in its path.

Officials revised the death toll to 24- including 9 children- but warned that they expect to find more bodies as rescuers dig through the rubble in Moore, OK. The National Storm Prediction Center in nearby Norman, OK forecast more severe weather closing in on the region.

With winds of more than 200 MPH and more than two miles wide in some places, the tornado was estimated to be an F5- the highest possible rating on the Fujita-Pearson scale. The storm touched down as a category F0 tornado outside of Newcastle, OK- to the west of Moore- and quickly gained strength as it moved northeast. Monday's storm followed a similar track to the 1999 Bridge Creek-Moore F5, which killed at least 36 people.

The death toll was initially thought to be 51, but it appeared as though some of the casualties had been double-counted. However, local officials had warned that between bodies still in the rubble and relatives who took those killed to funeral homes instead of the morgue, the death toll will likely be higher than 24. Officials at local hospitals said they've treated more than 200 people after the tornado struck, including as many as 70 children. Urban search and rescue teams are also reportedly bringing in cadaver-sniffing dogs to search more collapsed buildings in the area- including Plaza Towers elementary school where seven of the nine children were killed on Monday.
Posted by Fenway_Nation at 2:50 PM