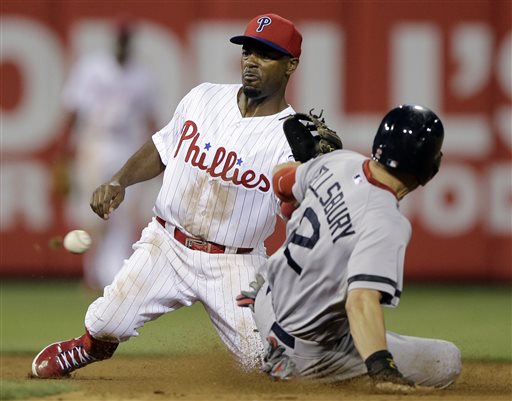 RED SOX- The Red Sox jumped out to an early 4-0 lead over the Phillies on Thursday night thanks to a 2-RBI single from Mike Carp and 2-RBI double from Saltalamacchia.

The Phillies would respond in the bottom of the first by getting two back on a 2-run Delmon Young homer, but after cutting the Boston lead in half, that would be as close as Philadelphia would get. Johnny Gomes would belt a solo homer to make it a 5-2 Boston lead in the top of the 6th and outfielder Jacoby Ellsbury would end up stealing a club record five bases on Thursday night as the Red Sox would continue adding to their lead. This included a Big Papi solo shot in the top of the 7th followed by three more runs in the top of the 9th thanks to an RBI Groundout from Steven Drew and RBI double from Saltalamacchia and Iglesias to make it 9-2 Boston.

Junichi Tazawa and Andrew Bailey would close out the 9-2 win for the Red Sox and Franklin Morales would win his first start of the season for Boston. Saltalamacchia would go 2-5 with 3 RBI and while Gomes and Ortiz both homered for the Red Sox, the real story of the night was Ellsbury who went 3-4 and basically ate Philly catcher Erik Kratz's lunch when he wasn't stealing five bases. Boston splits the series with Philadelphia 2-2 (the series was two games at Fenway and two games in Philadelphia), Boston's first interleague action of the 2013 season.

Since the game took place in a National League park, there was no DH slot- meaning Big Papi started at first base on Thursday night and was lifted late for Jackie Bradley Jr who had a single in his only at-bat. Bradley was called up from Pawtucket on Wednesday and is expected to remain with the team through the series against the Yankees in the Bronx.

Clay Buccholz, who was a late scratch from Monday's opener at Fenway against the Phillies is expected to re-join the team and start against the Yankees on Sunday. Meanwhile, the Yankees were swept by the struggling Mets in the interleague 'Subway Series' which includes two games in the Bronx and two games at Citi Field. 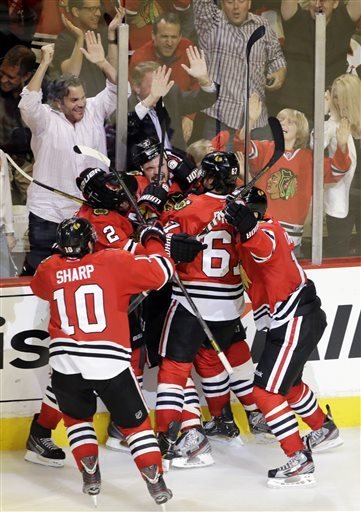 NHL- Unlike the Eastern conference, where the Bruins and Penguins were able to wrap up their respective series in no more than five games, both the defending Stanley Cup Champion LA Kings and the Chicago Blackhawks needed seven games to advance to the Western Conference finals.

It looked touch and go for the Blackhawks on Wednesday, but the United Center erupted with thunderous applause and cheers when the 1-1 deadlock appeared to be broken late after a Niklas Hjalmarsson slapshot found its way to the back of the Detroit net, but the apparent game winning goal was waved off after two offsetting penalties were called by officials.

Instead, the Chicago crowd would have to wait a few more minutes when Brent Seabrook got his first tally of the playoffs, beating Red Wings netminder Jimmy Howard 3:35 into OT and ending Detroit's season. The victory gives Chicago a matchup against the defending Stanley Cup Champion Los Angeles Kings, who bested San Jose by a 2-1 final on Tuesday night and won the series against the Sharks 4 games to 3.

Interestingly, the longest any of the four remaining teams has gone without winning a Stanley Cup? Try 2009....that was the year the Pittsburgh Penguins won it all. The Blackhawks won Lord Stanley's cup in 2010, the Boston Bruins won it in 7 games in 2011 and the Kings remain the defending Stanley Cup champions.
Posted by Fenway_Nation at 10:06 PM