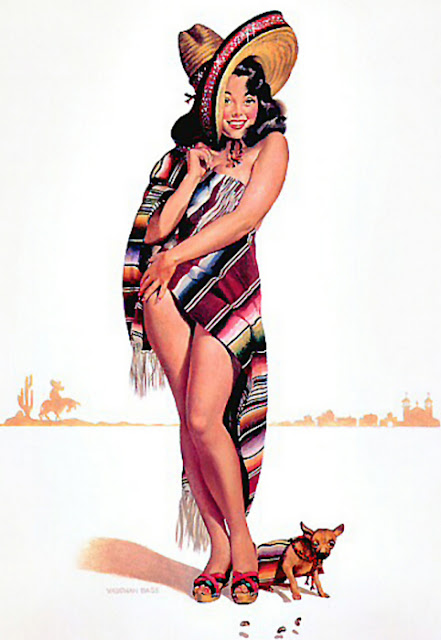 Or as some have started calling it, "Drink-o de Mayo".

As stated here before, Cinco de Mayo marks the anniversary of the Battle of Puebla in 1862 during the Napoleonic annexation of France. Some 4500 poorly trained and outnumbered Mexican troops managed to halt the advance of one of the world's most powerful armies while taking light casualties themselves.

Contrary to popular belief, Cinco de Mayo isn't Mexico's independence Day- that date is actually in September. But the importers of Corona, Dos Equis, Tecate and Pacifico saw an opportunity to market their product, and to paraphrase the late Paul Harvey....now you know the rest of the story.

I'm not sure of the title or date of this piece, but the sweet senorita accompanied by the jumping beans and poncho-clad Chihuahua comes from none other than Vaughan Bass. There is relatively few vintage pin-up artwork depicting latina models (or Caucasian models in traditional garb) but similar pulp art from Mexican artists continues to adorn pulp novels sold at newsstands or bus stations throughout Mexico to this day.
Posted by Fenway_Nation at 10:59 PM