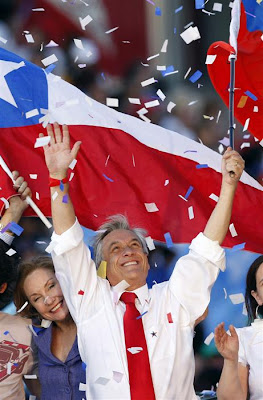 Sebastian Pinera, the Chilean tycoon who made his fortune introducing credit cards to the South American nation, will be sworn in as Chile's newest president Thursday, replacing outgoing socialist president Michelle Bachelet less than three weeks after the nation was rocked by one of the strongest earthquakes ever recorded. The conservative Pinera won a January runoff election against center-left Eduardo Frei Ruiz-Tagle. The 60 year old billionaire said "We won't be the government of the earthquake, we'll be the government of reconstruction". Pinera ran on a platform of creating jobs, reducing crime and boosting economic growth in 2009. Pinera's election win will end more than 20 years of center-left rule in Chile.

Although Bachelet has come under criticism for the government's slow initial response to the Febuary 27th earthquake, some polls show her as having an approval rating of more than 80%. 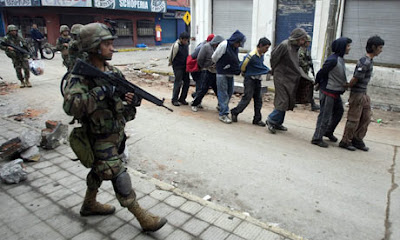 Police and military in Chile gave the looters that struck in the immediate aftermath of the earthquake an ultimatum this weekend- return the stolen items no questions asked by Sunday or face a crackdown. Items like fans, cases of liquor, Television sets, furniture, washing machines and stereos were left on the street for the soldiers and Carabineros to pick up and process. Acting on tips from residents, authorities in Concepcion had arrested 20 people in possession of looted merchandise. Police and the Army said they were ready to search house-to-house after televised images of looting shocked viewers in the normally orderly South American country.
The United States Air Force Southern Command announced in a statement on Tuesday that they were sending 84 Airmen to Chile, 63 of them medical personnel. The support team will be equipped to perform surgeries as well as dental, radiological, pharmaceutical and diagnostic work, US Military officials said. The team will relieve Chilean personnel taking part in the relief effort.
Apparently the earthquake was strong enough to move the city of Concepcion 10 feet to the west. Chile's capital of Santiago reportedly moved 11 inches to the west-southwest while on the other side of the Andes, the city of Mendoza reportedly moved significantly and Argentina's capital of Buenos Aires moved an inch to the west. Researchers and geologists were able to measure the shift by comparing GPS date from before the quake with readings taken 10 days later.
Posted by Fenway_Nation at 9:27 PM