Feeling Minnesota (and long overdue) Sports Chowdah Update- Target In Sight as Sox Sweep Minnesota; Ranger Danger- The Kids Are All Right As Bruins Jump Out to 2-0 Series Lead vs Blueshirts BOSTON RED SOX- After a lackluster start to the month of May that included getting swept by Texas and dropping three out of four to the Minnesota Twins at Fenway, the Red Sox seemed to get some of their mojo back, winning five out of their last six games- including a 3-game sweep of Minnesota at Target Field over the weekend.

Boston came into the weekend series taking two out of three from the Tampa Bay Rays- including a dramatic rally in the bottom of the 9th when the Red Sox down to their last strike when Will Middlebrooks belted a walkoff bases clearing double to give the Sox a 4-3 win. Like the Twins/Red Sox series opener at Fenway, Friday night's game 1 of the weekend series at Target Field required extra innings, but Boston ultimately prevailed on a Johnny Gomes RBI sac fly in the top of the 10th and Uehara got all three Twins batters he faced out to close out a 3-2 win.

For Saturday night, the Red Sox jumped out to an early 3-0 lead thanks to 3-run homer from former Twin Big Papi. Although starter Ryan Dempster didn't even make it the full five innings and the Twins would chip away at the Red Sox lead, Boston would go on to win by a 12-5 final.

On Sunday afternoon, the Twins were looking to avoid the sweep while Boston starter John Lackey was looking for just his second win of the season. Will Middlebrooks led off the scoring for Boston in the top of the second with a two out solo homer to right center. Another run came home with one away in the top of the third when Twins 3B David Plouffe threw away a Dustin Pedroia groundball with a pair of runners on base to make it 2-0 Red Sox. With storm clouds moving in over the Twin Cities, Pedroia and Big Papi each had one out singles before Napoli belted an RBI single to give Boston the 3-0 lead.

The Twins got on the board in the bottom of the 5th when Chris Parmalee came home on a Pedro Ciriaco throwing error in the bottom of the 5th. By the end of the 6th inning, the Target Field grounds crew put out the tarp as heavy rainstorms moved into the area. The rain delay of more than three hours was more than enough to show the 1993 movie The Sandlot in its entirety and since there had been enough innings played to make the game official, the dwindling crowd was left to wonder whether or not they'd try and get the complete game in. Since it was only a two run game before the delay, the Twins figured they had a shot at avoiding the sweep.

Instead, Catcher Joe Mauer struck out with the bases loaded to end a Minnesota threat in the bottom of the eighth. That's as close as the Twins would get as Dustin Pedroia hit a two run homer that clanged off of the wrist of Twins outfielder Josh Willmingham before clearing the fence in left field in the top of the 9th and after allowing back to back leadoff singles, Junichi Tazawa struck out the next two batters and got Chris Parmalee to ground out to second, ending the ballgame and completing the sweep of the weekend series.

The Red Sox will head further down the I-94 on Monday to take on the Chicago White Sox on the south side Monday night. Jon Lester [6-0; 2.72 ERA] is slated to get the start against Chicago's Dylan Axelrod [1-3; 4.27 ERA]- first pitch is scheduled for 8:10 PM ET and the game will be televised on NESN. 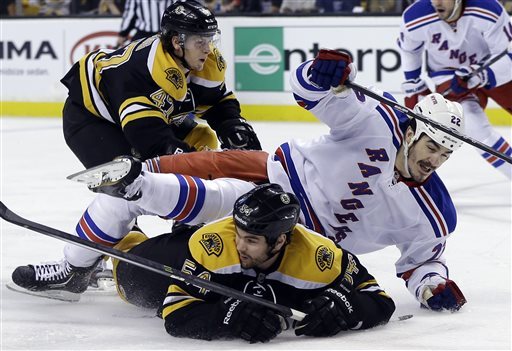 
BOSTON BRUINS- After the Maple Leafs jumped out to a 4-1 lead over Boston in the 3rd period of Game 7, the Bruins would score four unanswered goals to give them the series win. Patrice Bergeron scored both the goal that forced OT with 51 seconds left in regulation and the game winner just over 6 minutes into OT.

The Bruins opened up their second round series against the New York Rangers with a 3-2 win over the blueshirts on Thursday and this time they had some company- defensemen Matt Bartkowski and Torey Krug were called up from Providence. Interestingly, Providence is in a playoff contest of their own- they're currently playing the Scranton Wilkes-Barre Penguins, the AHL affiliate of Pittsburgh.

After the Bruins took game 1 against the Rangers, the recent callups from Providence made an immediate impact with Krug getting Boston on the board first on Sunday afternoon. Less than three minutes later, the Rangers would tie the game up on Ryan Callahan's unassisted tally. After the Bruins and Rangers swapped goals early in the second, Boston took the lead on a Johnny Boychuck goal with just under eight minutes to go in the second period. Early in the third, Brad Marchand wasted no time in padding the Bruins lead with a goal 26 seconds in. Milan Lucic added a goal of his own to give the Bruins a 5-2 lead.

Boston goes on to win by a 5-2 final- interestingly, neither team scored on the power play. The Bruins went 0-1 while the Rangers were 0-5 with the man adavantage.

The two teams will be back at it on Tuesday night from Madison Square Garden at 7:30 ET. The game will be televised on the NBC Sports network.
Posted by Fenway_Nation at 2:58 PM