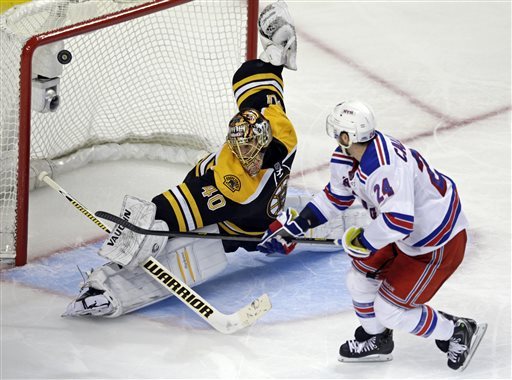 BOSTON BRUINS- Although the Bruins had a chance to close out the series against the New York Rangers with a sweep on Thursday night, the blueshirts came from behind twice to force an OT where the series and New York's season was kept alive on a Chris Kreider goal to give the Rangers a 4-3 win and force a Game 5 in Boston on Saturday.

And although a number of Boston fans confidently declared "Good- that means we can close out the series in front of the home crowd at the Garden", these were the same Rangers who would go on to advance past the Capitols after trailing in the series 2-0 and forcing 7 games.

For some of the doubters, plans were being made for a possible Game 6 as the Rangers would jump out to a 1-0 lead halfway through the first thanks to a power play goal from Dan Girardi.

But Boston would get on the board and tie the game up at 1-1 early in the second thanks to a power play goal from Providence callup Torey Krug. Gregory Campbell would give the Bruins their first lead of the day with an even strength goal at 13 minutes and 41 seconds into the 2nd period. But given the Rangers never-say-die attitude from Thursday night game, it appeared as though no lead was safe. Early in the third, Tukka Rask came up huge to keep the Bruins out in front.

The Bruins would not get any insurance whatsoever until the Rangers pulled Lundqvist late in the 3rd, at which point Campbell put the Bruins up by two with an empty-netter and giving them a 3-1 lead with less than a minute to go in regulation. The Rangers season comes to a close and the Boston Bruins advance to play the Pittsburgh Penguins in the Eastern Conference finals thanks to the 3-1 win on Saturday. Tukka Rask did not allow another goal after giving up that power play tally to Girardi in the first, turning aside 28 of 29 shots faced while Lundqvist stopped 29 of 31 shots faced. 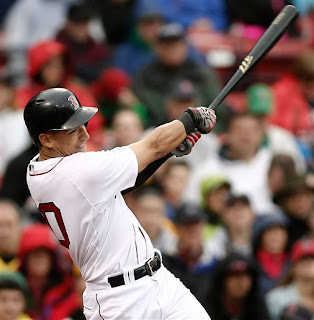 RED SOX- Thursday marked Terry Francona's return to Fenway for the first time since the 2011 season in which he was fired after Boston's late-season implosion- and to be sure, it started out as a triumphant one as his Cleveland Indians as they kicked off the 4-game series at Fenway with a 12-3 thumping of the Red Sox on Thursday night.

Friday night's contest saw Lackey get his third win of the season as the Red Sox jumped out to an early 3-0 lead and never looked back in their 8-1 win over the Tribe.

Jon Lester was given the start and struggled early on in Saturday's afternoon's contest, allowing 4 runs on 10 hits over seven innings. The Red Sox briefly managed to tie the contest up at 3-3 in the bottom of the 6th on a Jonny Gomes sac fly before former Red Sox Mike Aviles put Cleveland back on top coming home on a wild pitch in the top of the 7th. However, the Tribe bullpen imploded in the bottom of the 8th when reliever Vinnie Pestano gave up RBI doubles to Mike Carp and Dustin Pedroia followed by a 2-RBI single to Daniel Nava after intentionally walking Big Papi with two out.

Cleveland opened up the 9th with a leadoff single from Michael Bourn, but reliever Junichi Tazawa got the next three batters out to give the Red Sox the 7-4 win on a drizzly Saturday afternoon in Fenway.

The Red Sox will go for the series win on Sunday afternoon with Felix Doubront [3-2; 5.61 ERA] on the mound against Cleveland's Corey Kluber [3-3; 5.19 ERA]. First pitch is scheduled for 1:35 ET and the game will be televised on NESN. After the Cleveland series, the Red Sox will take part in their first interleague matchup of the season when the host Philadelphia on Monday.
Posted by Fenway_Nation at 11:10 PM