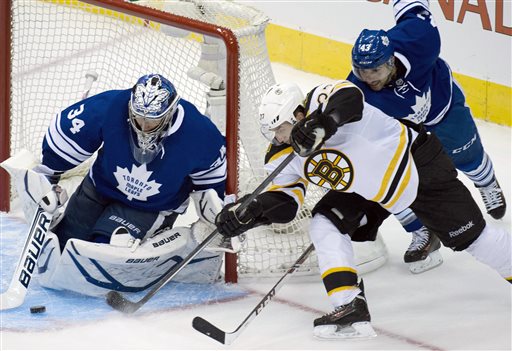 BOSTON BRUINS- After a very game Toronto evened up the series at 1-1 at the TD Garden over the weekend, the Bruins/Maple Leafs series headed to Toronto on Monday night. This would be the first playoff game for Toronto in more than nine years and in addition to a packed house of nearly 20,000 inside the Air Canada Centre, thousands more fans clad in blue and white jersets, jackets and facepaint gathered around outside the arena to watch the game on strategically placed big screen TVs.

The Bruins cut into the home crowd's celebratory mood by getting on the board first thanks to an Adam McQuaid goal about midway through the first to make it 1-0. The B's would add to that lead with a Rich Peverly tally just under 6 minutes into the second period before a Jake Gardnier power play goal would help the Leafs get on the board, cutting the Boston lead in half.

However, Boston answered back less than a minute later when Nathan Horton's shot not only beat Reimer but managed to embed itself where the goalie-cam was mounted. Two minutes later and with Toronto on the power play, Daniel Paille would snag the puck near center ice and beat Reimer on a breakaway to make it a 4-1 Boston lead.

The Leafs were still game and with the man advantage, they pressed their attack to start off the third, once again cutting into the Bruins lead- this time on a Phil Kessel [*BOOOO!*- NANESB!] power play goal to make it 4-2 less than a minute into the 3rd period. Despite the Bruins being outshot 18-6 in the third, that would be the only goal Tukka Rask would allow in the 3rd, and with less than two minutes to go in the first, the Bruins would get an empty-netter from David Krejci to make it 5-2. That would be the dagger as the Bruins take a 2-1 lead in the series.

Tukka Rask would allow two power play goals on the 47 shots he faced at the Air Canada Centre on Monday night while James Reimer stopped 33 out of 27 shots faced. In addition to the empty-netter, Krejci had two assists on the night while the veteran Jaromir Jagr also had an assist.

The Bruins deflated the home crowd in Toronto on Monday night and look to repeat the accomplishment on Wednesday night when the series resumes. The puck is scheduled to drop at 7:00 ET and the game will be televised on NESN, CBC and the NHL Network. 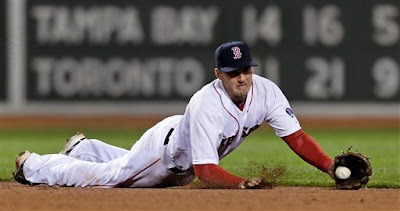 BOSTON RED SOX- It was starting to look as though May wasn't going to be quite as good to the Red Sox as April had been. After tying the club record for number of wins in April, the Red Sox took two out of three from the Blue Jays to end the month of April and start May. However, the rest of the road trip was somewhat forgettable as the Texas Rangers swept the Sox in Arlington, including a come-from-behind win to break a 3-3 deadlock on Sunday.

The Sox looked like they weren't going to fare any better in Monday night's game against the struggling Twins when Minnesota got two runs off of Clay Buchholz out of the gate to start off Monday night's game at Fenway. The Twins would take a 3-0 lead on an RBI double from outfielder Aaron Hicks in the top of the 4th before the Red Sox would get on the board in the bottom half of the inning thanks to a Shane Victorino solo homer.

Twins catcher Joe Mauer would miss hitting a homer by a few feet to lead off the inning, getting a ground-rule double to the deepest part of right center instead. 1B Justin Morneau would bring Mauer home to make it 4-1 Twins before the top half of the inning was through.

The bottom of the 5th would be pretty eventful for Boston as Daniel Nava led off with a double. Saltalamacchia and Middlebrooks struck out, but SS Steven Drew singled to bring home Nava and cut the Twin's lead in half. Jacoby Ellsbury would then double, but Drew was cut down at home to end the inning. Although Victorino and Pedroia would lead off the bottom of the 6th with back to back singles, Big Papi hit into the shift, resulting in a double-play as Victorino advanced to third. With two away, Napoli drove in Victorino to make it a one run game before Saltalamacchia struck out to end the inning.

However, it wasn't just the Twins relievers that were having trouble on Monday night. After coming on in the top of the 9th and getting Ryan Doumit to fly out to center field, Sox closer Joel Hanrhan gave up a solo homer to Brian Dozier to tie the game up at 5-5. After striking out Joe Mauer and walking Josh Willingham, Hanrahan was pulled for Clay Mortensen, who ended the inning by getting Justin Morneau to ground out.

With nothing resolved, the game headed into extra innings. In the bottom of the 11th, Twins reliever Jared Burton got the first two batters he faced out but would allow back to back singles off of Middlebrooks and Saltalamacchia. That brought up Steven Drew, who already had three hits on the night. The younger brother of former Red Sox outfielder JD Drew then ended the game with an RBI single that clanged off the green monster to give the Red Sox the 5-4 win in the longest game for Boston in this young season.

Clay Mortensen pitched two and a thirds innings of relief to get the win while Steven Drew went 4-5 with 3 RBI and a home run for the Sox. Big Papi went 1-4 to extend his hitting streak to 25 games (going back to last season).

Ryan Dempster [2-2; 3.00 ERA] who was seen warming up in extras on Monday night is scheduled to start for Boston on Tuesday, going up against Twins starter Scott Diamond [2-2; 3.97 ERA]. First pitch is scheduled for 7:10 PM ET and the game will be televised on NESN.
Posted by Fenway_Nation at 11:49 PM