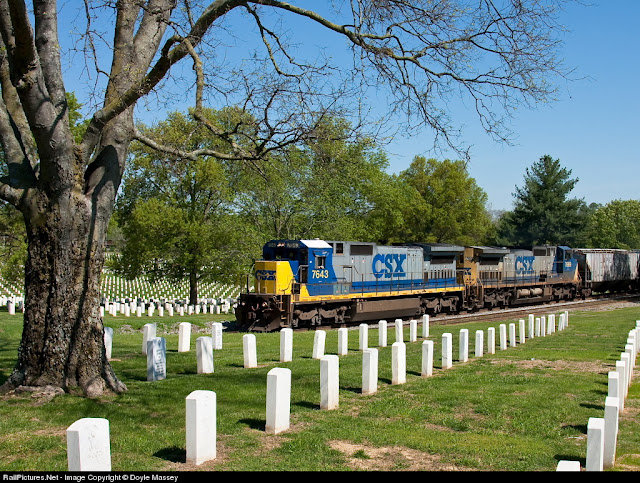 To this day, working railroads can be found running through a number of unlikely venues- such as the middle of a street or a golf course. Although some rail lines skirt the periphery of cemeteries and burial grounds, it's a little unusual for a line to run right through the middle of one.

One notable exception is the Nashville National Cemetery, however. The burial ground first opened up shortly after the Civil War just to the north-east of Tennessee's capitol. By 1879, nearly 19 additional acres had been conveyed to what is now the Nashville National Cemetery. Not surprisingly, much of this land was to accommodate soldiers from both the Confederacy and Union that were killed during the Civil War.

Yet to this day, the Nashville National Cemetery remains bisected by an operating rail line- an easement was granted to CSX predecessor line Louisville & Nashville in 1912 to operate the line 'in perpetuity'.

Here, railpictures.net contributor Doyle Massey caught a southbound CSX Q649 (Chicago to Birmingham, AL manifest freight) with C40-8 #7643 heading through the 64.5 acre burial ground in April 2009, more than halfway through her journey from the Windy City to the heart of Dixie. According to Massey, the Nashville National Cemetery was closed for burials by the late 1990s and was also added to the National Register of Historic Places around the same time.
Posted by Fenway_Nation at 11:46 PM