Today's Train of Thought- Everything Old is Newburg Again, May 3rd 2013 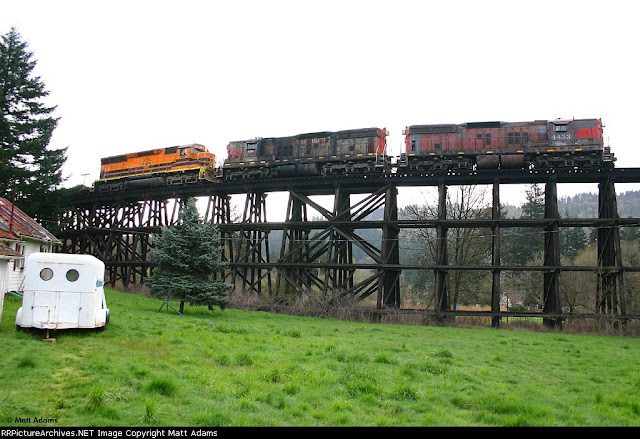 Today's Train of Thought takes us to the western corner of Oregon and a work train that has the outward appearance of being about 20 years out of place.

Eager to divest themselves of low volume lines in the Pacific Northwest, Southern Pacific sold off and leased hundreds of miles of track within the state or Oregon in the early 1990s. This included one of Genesee & Wyoming's first forays into the West Coast with the Portland and Western. Prior to the sale of lines to shortlines and regionals like the Central Oregon & Pacific, Port of Tillamook Bay, Albany & Eastern and Portland & Western, the lines in western Oregon were considered a holdout for the Southern Pacific's first generation diesels- high hood GP9s and SD9s that were referred to as Cadillacs.

Even with the change of ownership on many of the former Espee lines, there was still a place for the Cadillacs on some of the newly-formed shortlines and regionals, even though they could be considered museum pieces back in the 1990s.

Here, rrpicturearchives.net contributor Matt Adams caught SD9 #4433 and SD9 #4363 lead SD45R #3603 attacking Rex Hill outside of Newburg, OR with a work train on March 28, 2007. Despite the Southern Pacific painted units more than 11 years after the Espee ceased to exist and the fact that the two Cadillacs are on a Portland & Western train, the leading two units actually belong to Lavacot Locomotive Works- although apparently the ratty condition of the scarlet and grey Espee paint scheme on the two vintage diesels is very much in character for the Southern Pacific. Without the GWR orange and black paint, this picture could easily have been taken in the 1970s or 80s- the flatcars behind the lashup- which were being used to carry ties- aren't exactly out of place in timber country, either.

According to the photographer, the 1970-built SD45R experienced electrical problems on the way up Rex Hill and had to be shut down, meaning the two 1955-built SD9s were doing the lions share of the work tacking the grade.

Interestingly, the SD9's owners were well aware of their significance and the trailing unit was renumbered and repainted into the Southern Pacific's classic 'Black Widow' scheme a few months after this photo was taken. Renumbered #5399, she reportedly continues working for Oregon shortlines and regionals like the Portland & Western and Albany & Eastern.
Posted by Fenway_Nation at 11:31 PM