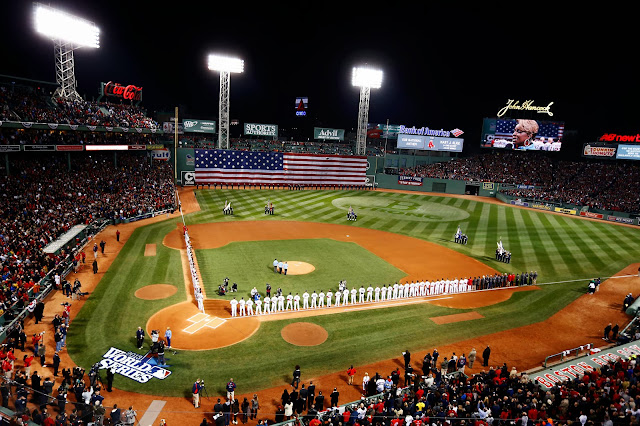 Nothing sends a shiver down my spine like seeing the Green Monster adorned with a giant stars and stripes. But ceremony notwithstanding, there was some baseball to be played on Wednesday night. 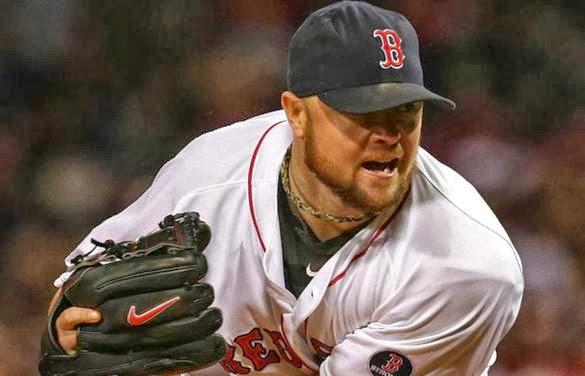 WORLD SERIES- Unlike Game 1 of the ALCS, it didn't take the Red Sox nearly 9 innings to get their first hit in Game 1 of the 2013 World Series. In fact, aside from the Red Sox hosting a Game 1 against a venerable organization from the Midwest, the resemblance stopped right there.

Despite giving up a 2-out single to St Louis' Matt Holliday, Boston starter Jon Lester had a pretty quick first inning. In the bottom half of the first, Lester would even get some run support early [and as it turned out, often- NANESB!] as Cardinals starter Adam Wainwright allowed the leadoff walk to Jacoby Ellsbury before getting ALCS Game 6 hero Shane Victorino to line out. The bases would then get loaded thanks to a Dustin Pedroia single and David Ortiz reaching on a fielding error by Cards shortstop Pete Kozma- second base umpire Dana Demuth blew the call when Pedroia was initially ruled out at second, but after Sox manager John Farrell argued the call and the other umpires conferred, the call was overturned.

The overturned call set up this opportunity for Mike Napoli with the bases loaded and only one out:

Napoli cleared the bases with a 3-RBI double before Wainwright got Johnny Gomes to ground out and Xander Bogaerts to strike out swinging, but the Red Sox had taken a 3-0 lead, something they were unable to accomplish in the first sixteen innings of the ALCS.

Lester had an even more efficient top of the 2nd, getting Yadier Molina and David Freese to strike out before Matt Adams grounded out to second. With Wainwright struggling and the Red Sox hitters smelling blood in the water, the bottom half of the second began when a struggling Stephen Drew reached first after Wainwright initially called for a routine, harmless popup between home and the pitcher's mound but then inexplicable allowed it to drop. Catcher David Ross then singled before Ellsbury flew out to left and Victorino made it safely to first on another Kozma error- once again loading up the bases on an error with only one away. Dustin Pedroia then singled to shallow left, bringing Drew home. This set the table for Big Papi once again, with the bases loaded and only one out. With the crack of Ortiz's bat, it appeared as though he just broke the game wide open with a fly ball towards the dugouts by right-center field, but Carlos Beltran was able to successfully run it down [he paid a price for it, but replay showed he was reaching well into the bullpen when he snagged it- NANESB!], colliding with the wall in the process. David Ross would come on the sac fly, although that was only 25% of the runs the Red Sox faithful were hoping for in that Big Papi at-bat. Mike Napoli would end the inning by grounding out to Wainwright, but now the Red Sox had taken a 5-0 lead.

After Lester struck out Carpenter to get the side in order, Wainwright began to settle down as well, getting the net six batters in order and allowing just a single before reliever John Axford came out of the bullpen in relief of him. Beltran also left the game with what was later disgnosed as bruised ribs after colliding with the bullpen wall when robbing Papi of that grand slam in the 2nd inning.

The Red Sox bats stayed pretty quiet until the bottom of the 7th when Big Papi got to hit one out of the park after all- a two out, 2-run homer off of the first pitch he saw from Cards reliever Kevin Siegrist.

Ortiz's 2-run blast gave Boston a 7-0 lead, and in the top of the 7th with two away, manager John Farrell would pull Lester for Junichi Tazawa would get Beltran's replacement- outfielder Jon Jay- to strike out to end the inning.

In the bottom of the 8th, Daniel Nava came in for Gomes and led off the inning with a double before heading to third on a wild pitch from St Louis reliever Carlos Martinez with Bogaerts at the dish. Bogaerts then hit a fly ball to left-center field deep enough for Nava to come home on, putting Boston up by 8 runs and giving the rookie from Aruba his first career postseason RBI.

Ryan Dempster would come out of the pen for Tazawa in the bottom of the 9th and allow a leadoff homer to Matt Holliday and allow a 2-out single to 2011 World Series hero David Freese before Matt Adams struck out to end the ballgame.

The Boston Red Sox take Game 1- a contest in which the team with the best record in the National League probably wishes they could get a mulligan on. Jon Lester goes 7⅔ shutout innings, despite the Cardinals loading up the bases in the top of the 4th [getting out of it when David Freese grounded into a double play- NANESB!].

Mike Napoli and David Ortiz led the scoring for the Red Sox with 3 RBI's each. Napoli went 1-4 with the bases clearing double while Papi went 2-3 with the just-missed-being-a-grand-slam sac fly for one RBI in the 2nd and the 2-run homer in the 7th.

I'm expecting a stronger showing from the Cardinals tonight- St Louis, quite frankly, looked ill-prepared and at times startled on the field. Their three errors on the night matches the combined total from the 2013 NLDS and NLCS, prolonging innings when it looked as though their starter might be able to get out of a jam with runners on base.

Thursday night's Game 2 will have Lester on the mound against St Louis rookie Michael Wacha. First pitch is scheduled for 8:07 PM ET and the game will be televised on FOX.

OTHER WORLD SERIES NOTES- Red Sox starter Clay Buchholz- originally slated to start game 3- will have his start pushed back to Game 4 due to what he referred to as fatigue in his throwing shoulder. Jake Peavy's start will instead be moved up to Game 3 at Busch Field in St Louis.

Meanwhile, Cardinals outfielder Carlos Beltran has been listed day-to-day after his collision with the bullpen wall in Game 1. 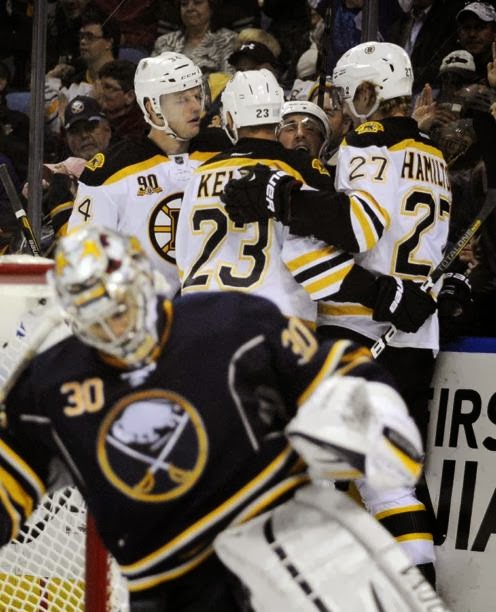 BOSTON BRUINS- Apparently the winning formula the Bruins have stumbled across is to play at the exact same time as the Red Sox. With the first two games of the Bruins road trip coinciding with Games 5 and 6 of the ALCS, the Bruins got off to a 2-0 start on their road trip in Florida.

Wednesday night's road game against the Sabres would get underway at almost the exact same time as Game 1 of the World Series. With not quite as many people inside the Hub watching (or at least flipping back and forth between the World Series and Bruins), Boston took on the struggling Sabres who are off the their worst start in franchise history.

Milan Lucic got the Bruins on the board with a goal at the 11 minute mark of the first period and then added to his total with another tally a mere 40 seconds into the second period.

The Sabres were able to cut the Boston lead in half thanks to a Cody Hodgson power play goal at about 8 and a half minutes into the 2nd, but Boston was able to pad their lead to make it 3-1 thanks to a Dougie Hamilton goal.

Nikita Zadorov brought Buffalo back to within one goal with less than 5 minutes to go in the second, but in the third period, Torey Krug would score two unanswered goals- including a power play goal midway through the 3rd- to make it 5-2 Boston.

The Bruins kick the 1-9-1 Sabres while they're down, and Buffalo, Sabres president Ted Black braced fans for more tough times ahead in an interview on WGR radio, basically saying that the franchise is going through a transitionary rebuilding period.

Meanwhile, the Bruins head back to Beantown [just in time for the World Series!- NANESB!] and will take on the 8-0-1 San Jose Sharks at the Garden on Thursday night. Puck is scheduled to drop at 7:00 ET and the game will be televised on NESN and the NHL network- so feel free to flip between that and the World Series if you're so inclined.
Posted by Fenway_Nation at 12:29 PM