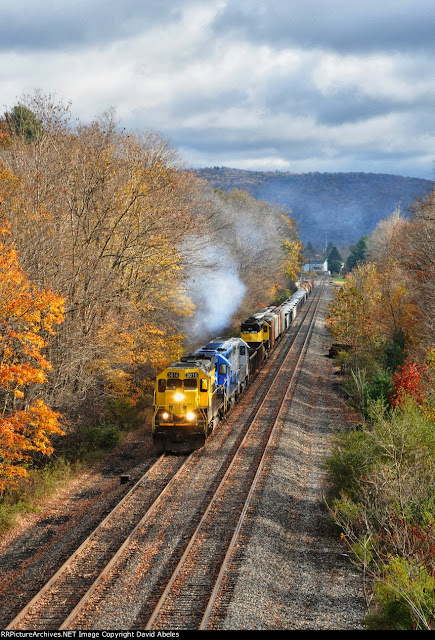 Today's Train of Thought takes us to the village of Deposit along New York's Southern Tier.

Located along the former Erie Southern Tier Line between Suffern, NJ and Buffalo, NY, the area around village of Deposit was settled in the 1880s [fairly recent for New York state- NANESB!]. The village itself straddles the Broome and Delaware County lines and reportedly got is name from nearby loggers and their practice of depositing logs along the river before floating them down the west branch of the Delaware River.

Both the highway and the railway that run through the village have undergone some noticeable changes in recent years. Completed in the 1850s, the Southern Tier line started out life as the Erie Railroad's primary link between New York City's western suburbs and the Buffalo area.

By 1960, the Erie had merged with Pennsylvania coal feeder line Delaware, Lackawana & Western to form the Erie Lackawana. However, like many northeastern rail carriers in the 1970s, the E-L would face hard times thanks to Hurricane Agnes, rising fuel costs and a labor dispute. By 1976 was actively seeking to be included in the formation of Conrail along with the Reading, Lehigh Valley, Penn Central and Central New Jersey. Part of the Conrail takeover included allowing trackage rights on the Southern Tier line to other railroads- the Delaware & Hudson's rights agreement with Erie-Lackawana between Buffalo and Binghamton were grandfathered in while the New York, Susquehanna and Western used trackage rights between Sparta Jct, NJ and Binghamton to reach their newly acquired line between Binghamton and Syracuse as well as the branch to Utica.

For Susquehanna, those rights remained intact throughout the Conrail era and during Conrail's 1999 breakup, the Norfolk Southern was awarded much of the former Erie lines. However, after Conrail's breakup, the Southern Tier line east of Binghamton saw decreasing traffic as the Norfolk Southern reached an agreement with Canadian Pacific and the Reading & Northern to route traffic east of Binghamton via Scranton and Allentown, PA.

Prior to the breakup of Conrail, the NYS&W regularly ran intermodal traffic over the Southern Tier line, exercising trackage rights between Buffalo and Sparta Jct, NJ- the line allowed the Chessie System and Norfolk & Western (eventually the CSX and Norfolk Southern) to access New York metropolitan area markets without interchanging with then-rival Conrail. However, that particular selling point of the Susquehanna was rendered moot when both CSX and Norfolk Southern were awarded lines in and out of northern New Jersey in the Conrail breakup.

Still, the Susquehanna had two disconnected lines that relied upon trackage rights over the Southern Tier line to connect them. By 2005, the New York, Susquehanna and Western had entered into an agreement with the Norfolk Southern to lease the 123 miles of line through rural New York and Pennsylvania between Binghamton and Port Jervis, NY to the Central New York- a paper railroad and wholly owned subsidiary of the NYS&W.

Two regularly scheduled freight trains still use the Binghamton-Port Jervis stretch of the line- Little Ferry, NJ to Binghamton freight SU-99 and its eastbound counterpart SU-100, although CSX will sometimes re-route trains via the NYSW if there is a derailment on the Water Level Route or Hudson River line.

Here, rrpicturearchives.net contributor David Abeles caught NYS&W SD40T-2 #3016 charging westbound through Deposit, NY on October 22nd, 2011 with a pair of leased SD40-2s trailing on freight SU-99 [and another yellow and black tunnel motor trailing, apparently dead in transit a few cars back- NANESB!]. The sun is out and the leaves have already turned on this fall day- according to the photographer, this was a pretty fortunate catch on his part since the SU-99 run is usually nocturnal- especially with the shorter days starting this time of year. The freight train is beginning its assault on the grade leading up to Gulf Summit to the east.

The highway around and through Deposit has also been undergoing some changes. Four lane New York Route 17 featured some at-grade intersections along the Southern Tier, but those are being eliminated and replaced for the highway's re-designation as Interstate 86, which eventually will run from Erie, PA to the New York State Thruway at Harriman, NY on the west shore of the Hudson River between Newburgh and the Tappan Zee Bridge.
Posted by Fenway_Nation at 10:51 PM