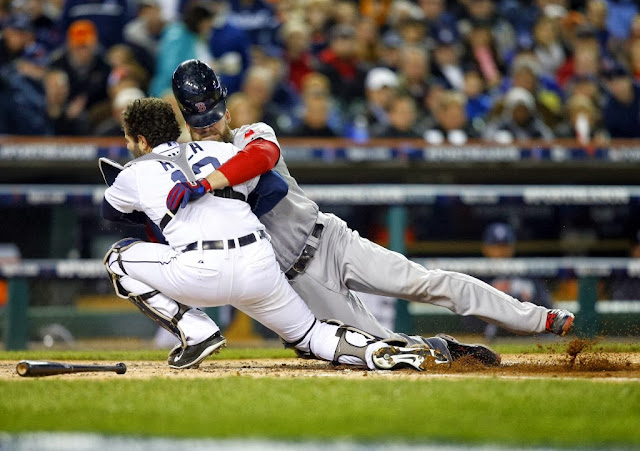 RED SOX- After Wednesday night's lackluster start by Jake Peavy and Detroit's 7-3 win over Boston, the ALCS became a best of three series with the Tigers evening things up at 2 games each. Tigers manager Jim Leyland's shakeup of the Tigers lineup seemed to pay dividends for Detroit and they were hoping to keep that going for Game 5 on Thursday night.

The last time the Red Sox faced Anibal Sanchez, he didn't allow a single hit and the Tigers bullpen held Boston hitless until the bottom of the 9th in Game 1. Game 5 of the ALCS was a slightly different story. This time, the Red Sox didn't have to wait nearly as long for their first hit against Sanchez, starting with a 2-out single by Pedroia in the top of the first.

On Thursday night, the Red Sox were looking pull ahead in the series and got out of an early jam in the bottom of the first when Miguel Cabrera attempted to come home from second on a two out Jhonny Peralta single, but was cut down at the plate by David Ross to end the early Tigers threat.

The Red Sox got on the board in the top of the second thanks to a leadoff homer by Mike Napoli- a 3-1 offering that was blasted at least 440 feet into dead center. Johnny Gomes then reached first safely on a throwing error by Miguel Cabrera and after Stephen Drew struck out, Xander Bogaerts doubled to left to give the Red Sox had runners on 2nd and 3rd with one out. David Ross then doubled to deep left, plating Gomes and moving Bogaerts to 3rd. Ellsbury then lined a hit off of Sanchez's glove that trickled to a halt on the infield grass behind the pitcher's mound between first and second, allowing Bogarts coming to home and giving the Red Sox a 3-0 lead. Shane Victorino then hit into a fielder's choice where David Ross plowed into catcher Alex Avila at the plate where he was called out. The inning ended when Pedroia grounded into a fielder's choice at shortstop.

Meanwhile, Lester had settled down, allowing only an Austin Jackson single in the bottom of the bottom of the 2nd. In the top of the 3rd, Napoli belted a ground-rule double and advanced to third on a Gomes groundout. Napoli then came home on a wild pitch by Sanchez to make it a 4-0 game.

Lester would then pitch two scoreless innings before Detroit got on the board thanks to a 2-out Miguel Cabrera RBI single. Detroit would then cut the Red Sox lead in half after Victor Martinez led off the inning with a walk to Victor Martinez before striking out Jhonny Peralta and allowing a single to Omar Infante. Lester was pulled for Junichi Tazawa, giving up a single to Barayan Pena before getting Austin Jackson to ground into a double play to end the inning.

Detroit would threaten again in the bottom of the 7th after Tazawa gave up back to back singles to Jose Iglesias and Torii Hunter. While a run did come home, whittling the Boston lead down to 1, the Red Sox got two much-needed outs when Miguel Cabrera hit into a double play. Craig Breslow would then come on in relief of Tazawa and get Prince Fielder to ground out and end the Tigers rally.

Meanwhile, Jose Veras was cruising after coming out of the Tigers bullpen, getting Napoli, Gomes and Drew out in order in the top of the 8th. After Breslow got Victor Martinez out with a groundout to leadoff the inning, manager John Farrell made the unconventional decision to bring Koji Uehara out of the bullpen for a 5-out save, striking out Jhonny Peralta and Omar Infante. While the Red Sox managed to threaten with runners on second and third with one away before Al Albuquerque struck out Victorino and got Pedroia to fly out to shallow center field.

For the bottom of the 9th, Uehara got three straight flyouts to end the ballgame, securing the Red Sox win and securing a 3 games to two advantage in the ALCS, winning by a 4-3 final. The Red Sox head back to Fenway needing just one more win to advance to the World Series and Clay Buchholz is scheduled to get the start against Max Scherzer for Game 6. First pitch is scheduled for 8:07 PM on Saturday and the game will be televised on FOX.

A couple of notes from Game 5- Mike Napoli went 3-4 with 1 homer and an RBI and crossed home plate twice, making him 6 for 16 with 2 homers and 2 RBI in the ALCS. Xander Bogaerts became the youngest starter in Red Sox history to appear in the postseason. All of Boston's ALCS victories have come by a margin of one run.


NLCS- Regardless of who wins the ALCS over the weekend, it will be a rematch of either the 2004 or 2006 World Series as the St Louis Cardinals took the deciding Game 6 of the NLCS by a convincing 9-0 final. Dodgers starter Clayton Kershaw was roughed up, allowing 10 hits and 7 earned runs in just four innings of work while Cardinals starter Michael Wacha threw 7 shutout innings of two-hit baseball. Although the first two innings started out as a scoreless tie, the Cardinals broke the game open in the bottom of the third thanks to RBI singles from Carlos Beltran, Yadier Molina and Shane Robinson. Robinson's two out, 2-RBI single would be all the Cardinals needed, getting five more runs in the bottom of the 5th and having their bullpen throw two shutout innings in relief of former Texas A&M Aggie Wacha.

The Cardinals cruise to a 9-0 victory over LA and await the winner of this weekend's ALCS at Fenway after winning the National League championship series 4 games to two. 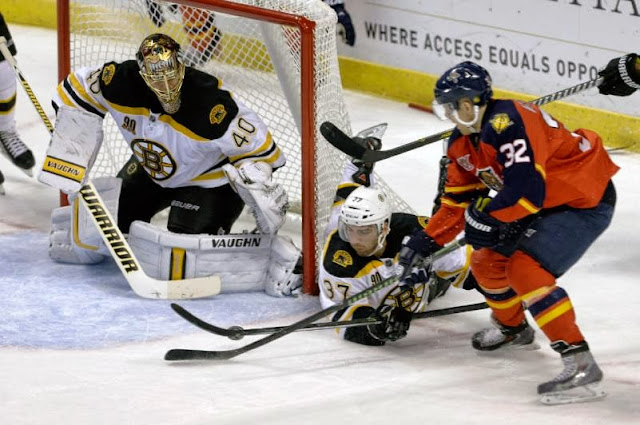 BOSTON BRUINS- The Bruins came up short in that OTHER Detroit vs Boston game this week before embarking on a road trip that started off in the sunshine State.

While in Sunrise, the B's encountered a familiar face in the decidedly un-retired Tim Thomas, who signed on to a 1 year contract with the Florida Panthers after a late September tryout with the team.

In the first, the Bruins were able to notch two tallies past their former teammate- one from Danny Paille and a power play goal from Dougie Hamilton to give Boston a 2-0 lead.

After the first intermission, the Panthers got on the board and cut the Bruins lead in half with a Kris Versteeg goal for the only score of the 2nd period. Florida than got the game-tying goal with six minutes to go in regulation thanks to Jesse Winchester. Acquired in the Tyler Seguin trade with Dallas in the offseason, Reilly Smith notched his first goal with Boston after beating Thomas with 59 seconds to go in the game, giving Boston the 3-2 win as the Bruins held on for the win with less than a minute to go.

Boston goes on to win by the 3-2 final in Sunrise, giving them a 4-2 record in the young 2013/2014 season so far. Rask stopped 27 of 29 shots faced while Thomas turned aside 37 of 40 shots faced [even after Thomas left the Bruins, didn't think I'd be doing a game recap with Rask and Thomas in opposite nets- NANESB!] and Boston was 1-3 on the power play.

The Bruins will stay in Florida for their next game, heading over to Tampa to take on the 5-2 Lightning. Puck is scheduled to drop at 7:00 ET and the game will be televised on NESN.
Posted by Fenway_Nation at 11:27 PM