Yowza! What a Sunday! Looked as though I'd be trying to sugar-coat two high-profile, nationally televised New England losses today, but I don't mind being wrong. Turned out today was EXACTLY the kind of day I had longed to blog about when I started up NANESB! four years ago. Instead of writing for the umpteenth time how much I LOVE this time of year, I'll do my best to let Sunday's events speak for themselves. 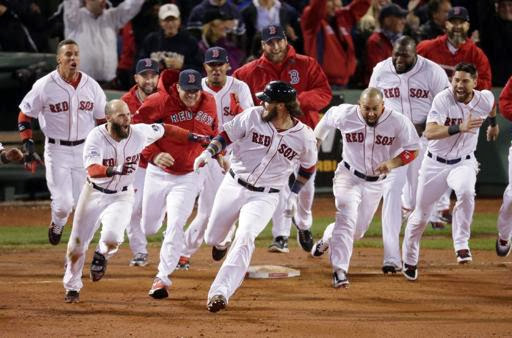 RED SOX- On Saturday, the ALCS opened up with the AL Central champions holding the Red Sox to zero hits through 8⅓ innings in Game 1. Detroit starter Anibal Sanchez went 6 innings, striking out 12 and walking 6 batters before the bullpen took over with a 1-0 lead thanks to an RBI single by Jhonny Peralta off of Jon Lester. Daniel Nava broke up the Tiger's no-hit bid with one away in the bottom of the 9th and the Red Sox put pinch-runner Quentin Berry, who stole second with two away to give Boston a runner in scoring position, but after a lengthy battle between Tigers closer and Red Sox rookie Xander Bogarts, the Boston shortstop flew out to end the game and give Detroit the 1-0 win.

Sunday's Game was starting to look like more of the same as Tigers starter Max Scherzer picked up where Sanchez and the Detroit bullpen had left off. This was the pitching matchup alot of baseball fans wanted earlier in the regular season with Scherzer going up against Clay Buchholz. The Tigers got out to an early 1-0 lead thanks to an RBI single off the bat of Alex Avila.

If you thought a 1-0 lead was insurmountable while being no-hit, then imagine how daunting a 5-0 lead would be. The Red Sox didn't have to imagine as Miguel Cabrera added to Detroit's lead in the top of the 6th with a 1-out solo homer, followed by a Prince Fielder double, an RBI from Victor Martinez and a 2 run homer from Aivla to give the Tigers a seemingly insurmountable 5-0 lead- all before Boston got their first hit of the night.

Shane Victorino broke up the Scherzer's no-hit bid with two away in the bottom of the 6th and one batter later, Dustin Pedroia ended the shutout with an RBI wall ball double that brought Victorino home before Big Papi struck out to end the inning.

After Buchholz allowed the four runs in the 6th, the Red Sox bullpen did a good job of keeping the Tigers hitless. Still, the Red Sox found themselves six outs away from heading to Detroit down 0-2 and facing a resurgent Justin Verlander in Game 3. After Drew led off the inning with a groundout, Will Middlebrooks doubled and Ellsbury followed that up with a walk. Victorino struck out swinging, but Pedroia singled to load up the bases with 2 away.

With David Ortiz coming to the plate, Tigers manager decided to go to closer Joaquin Benoit for a four out save. On the very first pitch Ortiz saw from Benoit, this happened:

Tigers outfielder came close to running Big Papi's grand slam down, but he hit the bullpen wall while running full tilt, tumbling into the Red Sox bullpen and needed a moment to shake it off. After the Detroit starters and bullpen notched more than 30 strikeouts against Boston hitters in the first two games of the ALCS, David Ortiz tied the game with one swing of his bat to make it a 5-5 contest.

Koji Uehara came on in the top of the 9th and retired the Tigers batters in order, bringing on reliever Rick Porcello. Johnny Gomes led off with an infield single and advanced to second when former teammate Jose Iglesias' throw got by Prince Fielder. Meanwhile, Jarrod Saltalamacchia battled with Porcello, staying alive after Prince Fielder attempted to catch a foul ball in the seats on the first base side only to have it clang off his glove.

A wild pitch from Porcello allowed Gomes to head to third and after working the count to 3-1, Saltalamacchia ended the ballgame in dramatic fashion.

Saltalamacchia's RBI single drives in the winning run and ties the series up at 1-1. Koji Uehara gets the win and Porcello is hung with the loss. The series resumes at Detroit's Comerica Park on Tuesday night- John Lackey is scheduled to get the start against Justin Verlander. First pitch is scheduled for 4:07 ET on Tuesday and the game will be televised on ESPN. 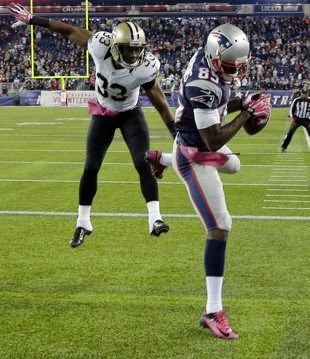 PATRIOTS- Fenway Park wasn't the only Massachusetts venue that was home to some late heroics.

New England was coming off of their first loss of the season with the rather daunting task of taking on the undefeated New Orleans Saints at Foxboro. Thanks to a Gostkowski FG and two Stevan Ridley rushing TDs, the Patriots got out to a 17-7 lead in the first half of Sunday's game. But the Saints started to chip away in the 3rd quarter, tying the game at 17-17 on their second possession of the second half. The Pats managed to briefly re-take the lead thanks to a 54 yard Gostkowski FG with 1:36 to go in the 4th.

Drew Brees was then picked off by Kyle Arrington on the Saints first possession of the 4th quarter. The Patriots would get as far as the New Orleans 4 yard line but ultimately have to settle for a FG to make it 23-17.

The Saints then got the ball back and took 5 minutes off the clock with an 81 yard scoring drive that had Saints QB Drew Brees hit paydirt on 3rd and 20 from the Patriots 34 yard line with three and a half to go in regulation. The Patriots would get the ball back but promptly turn it over on 4th and 6 after an incomplete pass from Brady. The Saints then added to their lead to make it 27-23 thanks to a 39 yard Garrett Hartley FG with 2:24 left in the game.

With 2:16 to go, the Patriots would get the ball back on their own 20, but would be picked off on a long pass to the Saints 30. All New Orleans needed was a first down to seal the ballgame, but ended up going three and out. With a rapidly emptying Gillette Stadium, New England got the ball back with 1:13 to go and nothing less than a TD would do it for the Patriots. Yet Brady put together an improbable drive- including two big completions to WR Austin Collie. With no timeouts and the two minute warning long gone, Brady spiked the ball after a big 4th and 4 completion to Collie, setting up 2nd and 10 at the Saints 17 yard line. Theoretically, that would give Brady time for two attempts, but all he'd need is one after finding Kenbrell Thompkins in the corner of the end zone with 5 seconds left on the clock.

What was left of the crowd went wild and the PAT made it a 30-27 Patriots lead with less than 5 seconds left. New England still needed to kick off- Darren Sproles fielded the punt but fumbled. Even though New Orleans recovered, it was a moot point as time expired.

One week after their disappointing loss to Cincinnati, New England rallies late to beat the undefeated Saints on Sunday in what would be Act 1 of a fast-paced Sunday in which New England prevailed late.

Next Sunday, the Pats will travel to the Meadowlands to take on the Jets. Kickoff is scheduled for 1:00 PM ET and the game will be televised on CBS.

Interestingly, the New Orleans loss whittles down the total number of undefeated teams in the NFL to two- both of them in the AFC West; the Denver Broncos and Kansas City Chiefs.

BOSTON BRUINS- The Bruins rallied late in Ohio's capital on Sunday afternoon after falling behind 1-0 to the Blue Jackets. Boston would score three unanswered goals starting with Chris Kelly in the 2nd followed by Loui Eriksson less than a minute into the 3rd and an empty netter from Milan Lucic with less than 30 seconds to go in the 3rd.

Just because the Red Sox and Tigers have Monday off for a travel day doesn't mean there's no Detroit vs Boston action on Monday. For the second time this young season, the Bruins will host the Detroit Red Wings at TD Banknorth Garden. The puck for this Original 6 matchup drops at 1:00 PM on Monday and the game will be televised on NESN and the NHL Network for viewers in Canada.
Posted by Fenway_Nation at 11:52 PM