NCAA FOOTBALL-Pretty busy night for a Thursday, but more on that in a bit.

After some speculation that they wouldn't even take place this weekend, both the Air Force vs Navy and Army vs Boston College games are set to kick off at their scheduled times.

Despite the majority of costs being paid in advance by private booster clubs, reports were circulating that this weekend's football games involving the US Service Academies in West Point, Annapolis and Colorado Springs would be cancelled or postponed due to this week's government shutdown.

However, in what some critics are calling 'Shutdown Theater' [in which the government cuts the most visible and public services as opposed to the most redundant or non-essential- NANESB!] the Pentagon announced that the decision for each academy to play would be subject to review beforehand. The fact that the Air Force vs Navy game was sold out this weekend and the Army Black Knights would likely have to pay a fine for breach of contract undercut most arguments that shutting down the football teams is the most economically prudent thing to do.

The Naval Academy announced that all varsity sports aside from football were cancelled through Sunday as well.

BOSTON COLLEGE- Well, the Eagles managed to bookend their bye week with two relatively difficult games and went 0-2, although given what a train wreck the USC program has become I'm a little disappointed they didn't perform better against the Trojans.

Last weekend, the Eagles actually had a first-half lead against the 8th-ranked Florida State Seminoles, but the defense was clearly outmatched and the 'Noles would go on to win by a 48-34 final on Chestnut Hill.

This weekend's upcoming game at Chestnut Hill has garnered all sorts of attention from the non-sports world, and it has nothing to do with the fact that its Boston College's homecoming.

The BC Eagles will play host to the Army Black Knights, who are sporting a 2-3 record and are [almost literally- NANESB!] being used as a political football due to this week's ongoing government shutdown.

Kickoff is scheduled for 1:00 ET and according to BC Athletics, the game will be streamed for free over ESPN3.

ELSEWHERE IN NCAA FOOTBALL- After a bye week, the UMass Minutemen are looking for their first win of the season. The Minutemen will head to Bowling Green, OH to take on the 4-1 Bowling Green Falcons on Saturday at 3:30 ET.

The UConn Huskies, after coming up short against the #15 Michigan Wolverines, lost to Buffalo by a 42-12 final last weekend and will host South Florida on October 12th.

BIG 12- The Texas Longhorns rallied late in Ames, IA and held on to win by a 31-30 final as DE Jackson Jeffcoat picked off Iowa State QB Sam B Richardson with 31 seconds left in the 4th quarter.

PAC 12- Although Utah got out to a 14-7 lead in the first quarter of their Thursday night game against #12 UCLA, the Bruins came roaring back late and would go on to win by a 34-27 final. The win give the Bruins a record or 4-0 while the Utes are now 3-2.

ELSEWHERE IN THE PAC 12- The USC Trojans fired head coach Lane Kiffin after the team's 62-41 loss to Arizona state last Saturday. Despite an above .500 record, the loss was reportedly the final straw for some who wanted Kiffin gone. There reportedly has been some interest in interviewing former Jacksonville Jaguars head coach and current Denver Broncos defensive coordinator Jack Del Rio to fill the vacancy left by Kiffin's dismissal. However, Del Rio has said he's not interested in the position. 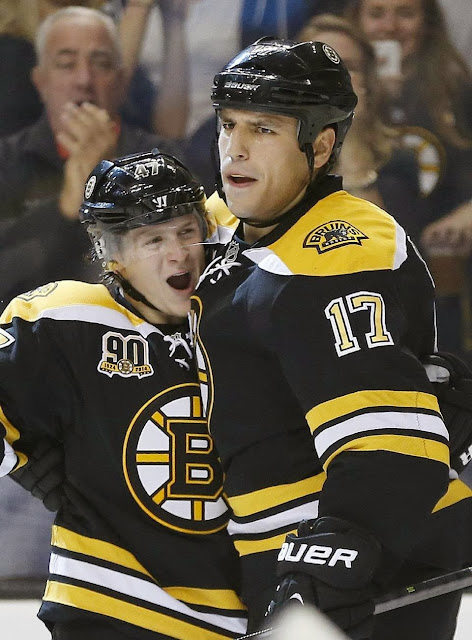 NHL- And just like that, the puck has dropped on the Bruins season.

Not only did the 2013-2014 season get off to a good start, the Bruins managed to make history by becoming the first NHL team to score their first goal of the season on a penalty shot.

Chris Kelly got the Bruins on the board with a penalty shot at the 8:21 mark that beat Tampa Bay goalie Anders Lindback- it also counts as a shorthanded goal since the Lightning had 31 seconds remaining on the power play as well.

Valtteri Filppula got the Lightning on the board with a goal around the 10 minute mark of the second period, but with a minute to go in the second, Milan Lucic put the Bruins back on top. The Bruins then extended their lead with a shorthand tally from Patrice Bergeron just after four minutes into the 3rd period.

Boston goes on to win their home opener by a 3-1 final. The homestand continues through the weekend when the Bruins will host the Detroit Red Wings on Saturday. Puck is scheduled to drop at 7:00 ET and the game will be televised on NESN and the NHL Network.

OTHER BRUINS NEWS- The Bruins celebrated opening night on the Causeway by announcing a 4-year contract extension with defenseman Dennis Seidenberg. The extension is said to be worth about $16 million over the next four years.

BOSTON RED SOX- It's been a very busy week in the MLB postseason, yet the Red Sox haven't played a single game all week. Instead, Boston was awaiting the winner of the American League Wild Card tiebreaker game followed by the one game play-in. As it turns out, Boston will face the Tampa Bay Rays after the Rays beat the Texas Rangers by a 5-2 final on Monday and shut out the Cleveland Indians by a 5-0 final on Wednesday- both of those wins coming on the road.

With the ALDS matchup set, game one will take place on Friday afternoon at Fenway with Jon Lester [15-8; 3.75 ERA] getting the start in Game one against Tampa Bay's Matt Moore [17-4; 3.29 ERA]. First pitch is scheduled for 3:00 ET and the game will be televised on TBS.

ELSEWHERE IN MLB- The Pittsburgh Pirates won their first playoff game since 1992 as Francisco Liriano pitched 7 complete innings and allowed just four hits in the Pirates 6-2 win over Cincinnati in the National League Wild Card play-in game on Tuesday night.

The win means the Pirates advance to play another NL Central team, the division champion St Louis Cardinals. St Louis took game one of the series by a 9-1 final on Thursday night with Game 2 set for Friday afternoon. Game two of the NLDS gets underway from Busch Stadium at 1:00 ET with the Bucs Gerrit Cole [10-7; 3.22 ERA] will get the start against the Cards Lance Lynn [15-10; 3.97 ERA] and the game will be televised on the MLB network.

In the other NLDS matchup, the Dodger jumped out to a 1-0 series lead against the Atlanta Braves thanks to Clayton Kershaw's 7 innings of 3-hit baseball while striking out 12 Atlanta batters. Former Red Sox and Padres first baseman Adrian Gonzalez broke the game open with a 2-run homer in the top of the 3rd and the Dodgers would go on to win by a 6-1 final. Game two is scheduled for Friday at 6:07 ET and will feature LA's Zach Gerinke [15-4; 2.63 ERA] going up against Mike Minor [13-9; 3.21 ERA]. Game 2 will also be televised on the MLB network.