I cannot overstate how much I love this time of year. Sure the days get a little shorter and there's a little chill in the air, but as the leaves explode into brilliant hues or orange, red and yellow in the New England countryside, there's also some electricity in the air. It's October, and the Red Sox are not only still relevant, but they've also been dominant. 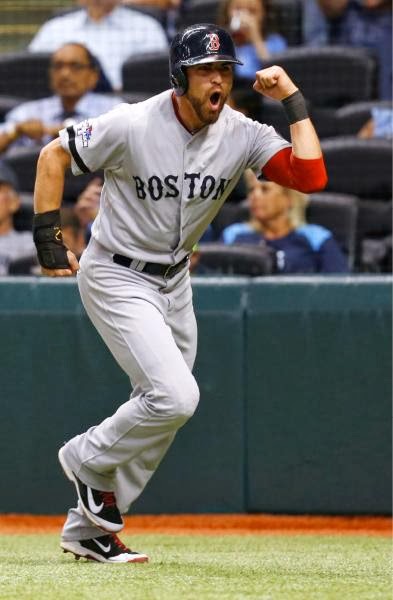 RED SOX- For the first time since the 2008 ALDS, the Red Sox are advancing to the American League Championship series. Interestingly, they bested the team that ended their 2008 playoff run in order to advance.

Tampa Bay was no stranger to must-win games coming into game 3 on Monday night, having played three elimination games the week before- besting the Blue Jays in the 'final' regular season game to qualify for a tiebreaker game with the Texas Rangers the following day. The Rays win in Arlington, TX won them a trip to Jacobs Field where they shut out the Cleveland Indians under the 1-game Wild Card elimination format.

On Monday, the Red Sox got out to the early lead to make it 3-0 in the top of the 5th, but Rays 3B Evan Longoria knotted the game up at 3-3 with one swing of his bat in the bottom half of the 5th.

The Rays briefly took a 4-3 lead in the bottom of the 8th on a Delmon Young RBI groundout with a runner at third. But in the top of the 9th, Will Middlebrooks drew a leadoff walk and had Xander Bogaerts replace him as a pinch runner. Dustin Pedroia would tie the game up on an RBI groundout but the inning would end with a Mike Carp strikeout, stranding a runner on 3rd.

It appeared as though the game would be heading to extras when Koji Uehara got the first two Rays batters out in the bottom of the 8th, but Jose Lobaton came in to pinch hit to give Tampa Bay the walkoff 5-4 win over Boston- winning their fourth 'must win' game in a little over the week.

Boston wasn't really interested in heading back to Fenway and being put in a must-win scenario themselves, so for Game four they brought out Jake Peavy to face Jeremy Hellickson.

Hellickson only made it to the top of the 2nd inning and manager Joe Maddon pulled him after walking the bases loaded with nobody out. Jamey Wright came in and got Saltalamacchia to strike out before former Red Sox infielder James Loney snagged a ball off the bat of Stephen Drew that looked as though it was heading to right field for a sure base hit and managed to double-up the runners.

The Red Sox frustration grew as Maddon went to the bullpen seemingly every inning, getting a new pitcher to face the Red Sox batters each time. But Peavy kept Boston in the game, shutting out the Rays until the 6th inning when he gave up a leadoff double to Yuniel Escobar followed by a Lobaton groundout to move the runner over to 3rd and a David Dejesus RBI single. Peavy then got Will Meyers to fly out to center before John Farrell pulled him to bring in reliever Craig Breslow, who ended the inning by striking out Loney.

In the top of the 7th, Johnny Gomes flew out to center to start off the 7th before Xander Bogaerts replaced Stephen Drew and drew a 1-out walk. Will Middlebrooks struck out before Jacoby Ellsbury singled, putting runners on 1st and 3rd with 2 away. After Maddon brought in Joel Peralta, Ellsbury successfully swiped second, giving the Red Sox 2 runners in scoring position. The rookie Bogaerts came home to tie the game on a wild pitch uncorked by Peralta while Ellsbury advanced to third. Victorino the legged out an infield single to plate Ellsbury- the Red Sox went from being shut out to scoring two runs when the ball didn't even leave the infield.

Not wanting to take any chances, Farrell brought out Uehara with a runner on and two away in the bottom of the 8th. In the top of the 9th, the Red Sox got some insurance after Shane Victorino was hit to load up the bases with one out. Once again, it was Bogaerts who crossed the dish to put Boston up 3-1 thanks to a Pedroia sac fly to right.

Uehara would come back on for the 9th and strike out Longoria to end the game and wrap up the ALDS. After a week of surviving must-win games, the season finally ends for the Tampa Bay Rays as they fall to Boston in the ALDS, 3 games to 1.

It's also worth pointing out that Johnny Gomes, Jarrod Saltalamacchia and Will Middlebrooks all notched their first career postseason hit in the ALDS. Although he has yet to get a postseason hit, rookie SS Xander Bogaerts has already scored three runs in the last two games of the ALDS while Peavy pitched well but didn't factor into the decision.

ELSEWHERE IN THE ALDS- After Tuesday night's celebration in the visitor's locker room at Tropicana Field, the Red Sox were awaiting the winner of the series between the Oakland A's and Detroit Tigers. Earlier on Tuesday, the Tigers had rallied from going down 0-3 to hang on for am 8-6 win over the AL West champions in Comerica Park, forcing a deciding game 5 back in Oakland for Thursday night.

Game 5's pitching matchup was Game 2 rematch featuring rookie Sonny Gray against 2011 Cy Young winner Justin Verlander. Verlander threw a gem in the pitcher's duel that was Game 2, but had no decision and the A's ultimately won on a walkoff RBI single in the bottom of the 9th.

Thursday night was another story, however. While Gray got off to a good start, he served up a 1-out 2 RBI homer to Miguel Cabrera in the 4th to make it 2-0 Detroit. Omar Enfante would make it a 3-run game in the top of the 6th after grounding into a fielder's choice with a runner on 3rd with only 1 out.

Meanwhile- kind of like Red Sox pitcher Brandon Workman earlier this year- Justin Verlander took a no-hitter into the 7th inning at the Oakland Coliseum. Unlike Workman, the first hit Verlander gave up stayed in the park- a 2 out Yoenis Cespedes single that did no damage.

After manager Jim Leyland had starter Max Scherzer come out of the bullpen for game 4 and pitch two innings, Verlander most of the Tigers pitching staff the night off, throwing 8 shutout innings while giving up two hits and striking out 10 batters. Joaquin Benoit came out of the pen for the save, getting the first two batters out before allowing a double to former Red Sox infielder Jed Lowrie and hitting Yoenis Cespedes with a pitch. However, Benoit would get Smith to fly out to end the ballgame and wrap up the series for Detroit.

This sets up a Boston vs Detroit ALCS with Game 1 slated for Saturday. Jon Lester will get the start against Anibal Sanchez. First pitch from Fenway is scheduled for 8:07 ET and the game will be televised on FOX.

NATIONAL LEAGUE- The LA Dodgers rallied late in Monday night's game to beat the Atlanta Braves and take the series. Atlants had just taken a 3-2 lead on a Jose Costantza pinch hit RBI single in the top of the7th, but in the bottom of the 8th, Juan Uribe belted a 2 run homer to put the Dodgers up for good, giving them nearly five days off as they awaited the winner of the Pittsburgh/St Louis Series.

Meanwhile, my dreams of a 1903 World Series rematch have been dashed by the St Louis Cardinals, as they beat the Pittsburgh Pirates on Tuesday at PNC Park by a 2-1 final to force a deciding Game 5 which the Cardinals won by a 6-1 final on Wednesday night.

First pitch for Game 1 of the Dodgers/Cardianls NLCS is scheduled for 8:37 ET from Busch Stadium on Friday night and the game will be televised on TBS.

NFL- Tom Brady's streak of 52 consecutive games with a TD pass came to an end on Sunday and not surprisingly, the Patriots were handed their first loss of the season in a rain-drenched Paul Brown stadium.

Former Patriot Ben Jarvus Green-Ellis scored the only touchdown of the day for Cincinnati with a TD run on 4th and goal in the 4th quarter, but it would be all the Bengals needed in the 13-6 win over New England on Sunday.

Although the Patriots head home for Week 6, it doesn't get easier with the Pats hosting 5-0 New Orleans. A bit of good news is that Rob Gronkowski has been listed as day to day, although it's unlikely he'll start Sunday. The TE had missed every game after leaving last season's playoff game against the Houston Texans with a forearm injury. In the offseason, Gronkowski had multiple surgeries on his arm as well as an additional prodecure to clear up an infections.

NHL- The Boston Bruins were dealt their first loss of the season and were shut out for the first time since February 2012 on Thursday night when the visiting Colorado Avalanche came away with a 2-0 win.

LW Ryan O'Rielly gave the Avs the lead late in the first period with a power play goal while JS Giguere turned aside all 39 shots he faced in his season debut for Colorado. The Avs are off to a 4-0 start under head coach Patrick Roy- their best start since relocating to Denver from Quebec City during the 1995-1996 season.

The 2-1 Bruins will travel to Columbus to take on the Blue Jackets on Saturday afternoon for their first away game of the 2013-2014 season- Columbus is also sporting an identical 2-1 record.

Puck drops at 2:00 ET and the game will be televised on NESN.
Posted by Fenway_Nation at 4:31 PM