Sports Chowdah Update- Go Go Johnny Gomes, Red Sox Bounce Back to Even Up World Series After Interference Call; All Tannehill Downhill From Here- Patriots Surge Past Miami in Explosive 2nd Half;

Today's Sports Chowdah Update provides an example of New England teams bouncing back after a late call cost them dearly. 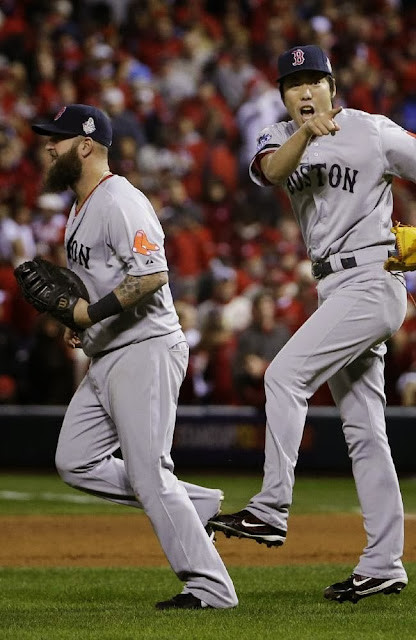 WORLD SERIES- One night after St Louis took a 2-1 series lead on an interference call in the bottom of the 9th inning, Game 4 of the 2013 World Series came to yet another unbelievable conclusion.

Besides the umpires ruling that Will Middlebrooks interfered with Allen Craig in the basepath when he was attempting to come home on an errant throw from Saltalamacchia in the bottom of the 9th, the biggest storyline was whether or not Clay Buchholz would start for Boston in Game 4 after having his start pushed back- and if so, how many innings would he last.

The answer, as it turned out, was four. Buchholz likely would've lasted a little longer if Game 4 was being played in an American League ballpark. After trailing 1-0 in the top of the 5th, the Red Sox managed to load the bases with nobody out before Stephen Drew managed to tie the contest up at 1-1 with a sac fly to left that brought Big Papi rumbling in from 3rd. Red Sox manager John Farrell decided to bring in Mike Carp to pinch hit for Buchholz with two on and two away, but the Boston rally ended when Carp grounded out.

For the second straight night, Felix Doubront came out of the pen and on Sunday night, he was dealing more gas than a Marcellus Shale rig, getting Carpenter, Beltran and Holliday out in order in the bottom of the 5th. In the top of the 6th, starter Lance Lynn got two quick outs before allowing a 2-out single to Dustin Pedroia and an unintentional intentional walk to David Ortiz. At that point, Cards manager Mike Matheny brought in reliever Seth Maness out of the bullpen to face Johnny Gomes, who was starting for the slumping Shane Victorino. With two strikes and two away, Gomes changed the game with one swing of his bat.

Gomes, who came into Sunday night's game 0-8, managed to hit it into the Red Sox bullpen out in left field to give the Red Sox a 4-1 lead. Doubront, meanwhile, would continue baffling the St Louis batters he faced until the bottom of the 7th when Shane Robinson would pinch hit for reliever Randy Choate. The Cards pinch-hitter would get a two-out double to get a runner in scoring position for the first time since the bottom of the 4th. After Craig Breslow came out of the Boston bullpen, he immediately gave up a single to Matt Carpenter, bringing home Robinson to cut the Red Sox lead in half.

Breslow would then walk Carlos Beltran to bring the go-ahead run up to the plate in the form of Matt Holliday. Junichi Tazawa, however, would come out of the pen and get Holliday to ground out and end the St Louis threat in the 7th. Cards reliever Kevin Siegrist would get two quick outs before allowing a single off the bat of David Ortiz- who then left the game so Quentin Berry could pinch-run for him. Former Brewers reliever Jon Axford came in for the Cards and after Berry successfully stole second, Axford walked Gomes before getting rookie Xander Bogaerts to strike out and end the Red Sox threat in the top of the 8th.

In the bottom of the 8th, none other than Game 2 starter John Lackey came out of the bullpen to pitch an inning of relief. After getting Matt Adams to ground out, Yadier Molina got on base thanks to a throwing error from Bogaerts, advancing to second. The not-exactly-fleet-of-foot catcher advanced to 3rd on a wild pitch, meaning that with any sort of ground ball or reasonably deep fly ball, St Louis could make it a 1-run game. However, Lackey managed to snuff the St Louis rally by getting outfielder Jon Jay to pop out to shortstop and 2011 World Series hero David Freese to ground out to short.

Axford had an efficient 9th inning, getting Drew, Ross and Napoli [who came in after Big Papi was lifted for the pinch runner- NANESB!] in order. In the bottom of the 9th, Koji Uehara came on for the save and got Daniel Descalso to ground out to start off the inning. A hobbled Allen Craig came on to pinch-hit for Axford and belted a ball to deep right where Daniel Nava had to field it off the wall for what amounted to a long single. Craig was lifted for pinch-runner Kolten Wong. Matt Carpenter popped up to shallow right field for the second out with Wong staying at first.

With two away, Carlos Beltran stepped into the batter's box representing the potential tying run for St Louis. The announcers for ESPN Radio, FOX and KMOX kept questioning why Uehara was so focused on the runner at first when it was believed the Red Sox would gladly cede 2nd base if it meant getting the batter out. With a 1-1 count on Carlos Beltran, Uehara demonstrated why he was so intent on the runner at first.

Uehara's pickoff throw took the bat out of Beltran's hands and ended Game 4- the first-ever World Series game to end on a pickoff throw. This means the 2013 World Series is now a best-of-three contest. After coming on for some long relief for the second straight night, Felix Doubront gets the win for Boston- his first career postseason win.

Game 4 is set for 8:07 PM ET on Monday night and will feature a rematch of Game 1 starters Jon Lester and Adam Wainwright. Despite Game 1's disastrous start for Wainwright, the Cards starter has an 11-6 record and 2.83 ERA at home this season. The game will be televised on FOX and broadcast on ESPN Radio. 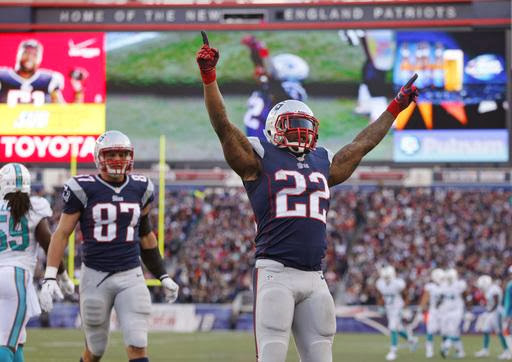 NFL- After last week's late and costly penalty cost them the game against the Jets, the Patriots fell into an early hole against the Miami Dolphins at Foxboro.

After trailing Miami 14-0 in the second quarter and heading into the locker room at halftime down 17-3 with just 59 offensive yards, New England would need a near flawless second half to bounce back.

While not flawless, the Patriots came up HUGE in the second half of Sunday afternoon's game at Gillette stadium, scoring 24 unanswered points. New England got the ball rolling on their second possession after a missed Dolphins FG attempt gave the Patriots their ball back near their own 40. Stevan Ridley opened up the drive with a 23 yard run before Brady connected with TE Gronkowski for 23 more yards on 2nd and 10 from the Dolphins 41 before capping the drive with their first TD of the day on a 14 yard completion to WR Aaron Dobson to make it a 1-TD game.

New England would manage to tie the game before two minutes came off the game clock. The Dolphins started out on their own 20, but Miami QB Ryan Tannehill was immediately sacked by CB Logan Ryan while DE Rod Ninkovitch recovered the loose ball on the Miami 13. The game would be tied when RB Brandon Bolden would punch it in on first and goal to make it 17-17 after the Gostkowski PAT. The Patriots would get their first lead of the day after Gostkowski kicked a 48 yard FG to make it 20-17 late in the 3rd quarter.

On Miami's first drive of the 4th, a 28 yard Tannehill pass attempt was expertly deflected by DB Devin McCourty while Marquice Cole caught it, managing to keep both feet in-bounds on the play. This gave New England the ball back on their own 18 and the Patriots managed to take the ball 72 yards on a drive lasting nearly 6 minutes- including Brady successfully running for a first down on 4th and 4 from the Miami 34 and a costly penalty against Miami after sacking Brady and batting the loose ball further back- before the drive was capped on a 3 yard TD run by Stevan Ridley to give New England the 27-17 lead.

Miami was able to put another drive together and got as close and the Patriots 15, but on 3rd and 3 Ninkovitch sacked Tannehill to push the Dolphins back 6 yards, forcing them to settle for a FG attempt with just over 2:40 remaining in the game. Caleb Sturgis' FG attempt was blocked by Chandler Jones- essentially ending the ballgame and preserving New England's 2nd half shutout. Patriots snap their 1-game losing streak within the AFC east and go on to win by a 27-17 final.